Things that annoy me in Linux Mint

Things that annoy me in Linux Mint

The original title of the text document I composed last night was a bit different but thought I should be decent in public. This does not take away the aggravation I feel at times when things go south.
I have to mention I'm currently using a Samsung R-580 notebook with Intel i5 CPU, 4GB RAM, nVidia GeForce 310M video card.
That said, here's the current list in a somewhat random order: 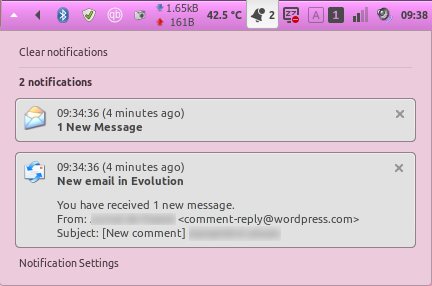 These are not the only problems I encounter with my Mint installation but are those that annoy me most lately. In time maybe I'll modify this list, adding or deleting items according to what happens in future Mint patches and/or releases.

If any of the developers cares to fix some issue or needs more info, please feel free to contact me by PM.
Last edited by Drugwash on Wed Sep 04, 2019 3:45 am, edited 2 times in total.
Top

Drugwash wrote: ↑
Tue Sep 03, 2019 10:00 am
- Without an Internet connection driver manager takes minutes to open up, and when it finally does it simply says: "Drivers cannot be installed. Connect to Internet or insert DVD/USB stick." One can't even see what drivers are currently installed and enabled, if any.
- Driver manager does not follow the currently enabled theme.

I'll make a note of those for my PPA. I'm not using any proprietary drivers so I'm never looking at that one except upon request.


Drugwash wrote: ↑
Tue Sep 03, 2019 10:00 am
- There is no way to set up separate names and settings for Internet connections on the same device according to the current subscription card inserted in the device (although each card must have its own serial number or something). This creates major confusion if connection shows up as Provider1 while the card inside is from Provider2, and more so trouble when one is a metered connection while the other isn't. There's also no way to create separate profiles for different Mobile Broadband network devices, nor a way to connect more than one such device at a time and select which applications/services use a certain connection.

Seems to work fine for me, I have device-specific connections set up and they are working correctly.

Probably a Cinnamon-specific issue. Not a problem on MATE.


Drugwash wrote: ↑
Tue Sep 03, 2019 10:00 am
- In a multi-monitor environment on a notebook, closing the lid automatically moves the desktop to the external monitor although nobody asked it to;

Most users will want their screen to turn off when closing the lid. Best turn off lid action in your UEFI, otherwise edit /etc/UPower/UPower.conf and set IgnoreLid=true.


Drugwash wrote: ↑
Tue Sep 03, 2019 10:00 am
- Sometimes closing the lid (with only built-in monitor enabled) sends the machine to sleep mode although settings are to DO NOTHING (both on battery and on AC) AND power management is disabled either by an application or manually (through the Inhibit applet).

Haven't seen that happen but the above should take care of that, too.


Drugwash wrote: ↑
Tue Sep 03, 2019 10:00 am
- Display brightness function very seldom works; it usually doesn't, although the OSD appears on the screen and slider moves according to the keys being pressed (Fn + Up/Down).

Never been a problem for me and I use this all the time. Probably specific to your hardware, or again a Cinnamon issue.
Tune up your LM 19+: ppa:gm10/linuxmint-tools
Top

Thank you. It all started with that one actually. I wanted to move my 3G card from the intrusive USB modem to the Express Card and noticed it wasn't appearing anywhere so thought I should check the drivers panel, see if it appears there as unknown or something (Windows user habit - check Device Manager for yellow exclamation marks). With no Internet connection, driver panel wouldn't even show the devices (there's the nVidia video card there) and current drivers.
Its theme seems to be locked on Adwaita or something, I see blue progressbars, not pink:

Again a Cinnamon issue...? I'm trying to add a connection and it modifies the existing one instead. There are no details on the current device, names are generic like Mobile Broadband. I have two similar Huawei K-series sticks, one Huawei E-series stick, one ZTE K4607-Z stick (this one is complicated) and the Huawei Express Card.There should be a way to issue some AT commands to query the modems and display some meaningful strings (and use their IMEI to separate connections).
I also have two subscription cards, one of which is metered, so I need to know exactly which card is where and if it is active or not.
It would also be useful to show the connection speed of the device. Some are 7.2Mbps, others are 22.6MBps, others are 44+MBps or more. Took me quite a while to realize why download speed dropped from 1-2MB/s to 400-500kB/s: I had switched modems and the new K-series one was 7.2, not 22.6 as the E-series. Had that information been in the network panel...

Yes, there's an Auto-arrange option that insists on horizontal or vertical, no option for grid only. And there's a Sort items by that also insists on something: either name, size, type or date - while I don't want any of those. Just don't sort, period. No can do: 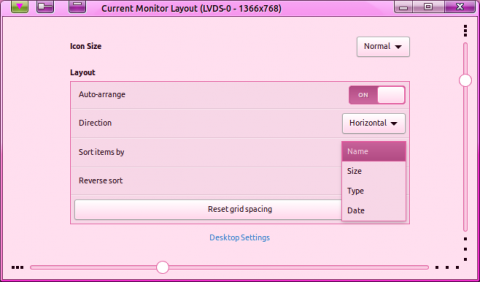 This one is not as simple as it may seem. BTW, this BIOS is not UEFI.
Indeed, when closing the lid there should be a hardware command to turn off the built-in monitor's backlight, but that's it. Once I specifically set in Power to not do anything on lid close, it should not do anything; and there's also the option to perform same action - that is, nothing - when external monitor is attached. However, the system decides it should move all desktop to the external monitor (even when it's turned off) and on lid open it completely screws up desktop icons and window placement. Luckily there's an option 'Move to the other monitor' in panel buttons' context menu, which brings back the windows, but the icons remain there, the desktop arrangement is gone. And when those options mentioned in first post are not enabled, icons will be missing from all monitors until a reboot. Unacceptable.
(apparently can't add more than three images to a post so no more screenshots here)
The brightness issue is strange, it used to work, now it doesn't. The commands are issued, the OSD follows the commands (a bit delayed) but no effect on the screen. Samsung offers some applications for these functions, complete with OSD, but they're Windows-only. They used to work though.
Top 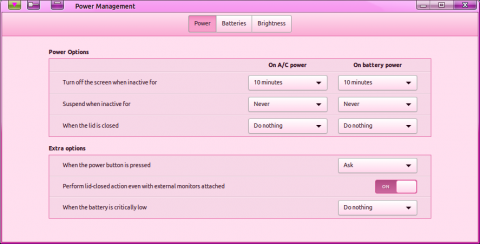 Oh and forgot to mention the situation when user closes the lid and there's a fullscreen application running on the external monitor - like a media player, a game, whatever. What happens then with desktop being moved and all? Haven't checked yet but basically that's why I connected the external monitor: to open the media player there and watch movies a bit more confortable. I'll have to test that soon.

EDIT 2019.09.04, 05:39 UTC:
I checked last night. Opened SMPlayer, moved to external monitor, started a movie, then closed the lid. In about five seconds the external display got blank for a few seconds while the sound was playing normally, then the video reappeared. I lost some scene.
Last edited by Drugwash on Wed Sep 04, 2019 1:39 am, edited 1 time in total.
Top

I know how to fix the theme problem, it's a common theme in Mint (bad pun totally intended

) - I should already have fixed it for all the other tools in my PPA in fact (as I mentioned recently, I even theme Timeshift if you access it via Update Manager, whereas when you load it directly it won't be themed). If I missed another one (that's on the PPA), do let me know. I greatly dislike theme inconsistencies like that.

Yes, actually. I forgot Cinnamon was using its own network applet. Try to access network connection settings from the menu instead (assuming Cinnamon includes that), see if you got something like this: 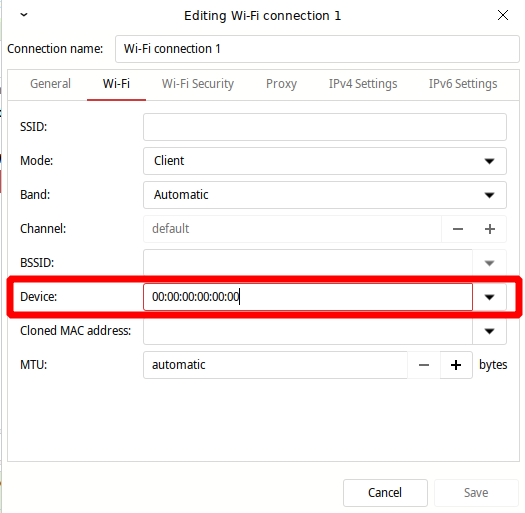 That seems like yet another Cinnamon issue then, on MATE the primary monitor doesn't switch (whether the external monitor is turned on or off), instead your configuration is respected. I suppose Cinnamon tries to be too smart for its own good there.
Tune up your LM 19+: ppa:gm10/linuxmint-tools
Top

Tell me about it! I've been working hard to adapt this pink theme to Linux, there's still a lot to do and... there pops a blue progressbar. Argh!

I'll have to check again what modules you have in the PPA. Or you could send me a list.

Panels are the same, regardless where they're being accessed from. Systray is just more convenient.

So it seems. Now you understand why I clinged claws and teeth to Win98SE for as long as I could? That thing does exactly what I tell it to do, when I tell it to do it.

You could just not use Cinnamon, since most of your issue seem to be with that desktop environment - although I'm sure that you could find other issues with other desktops.

Can't make friends with others. I tried, in time, but Cinnamon is the only one that got closest to my preferences. I am still testing around, from time to time, but it gets more and more dissapointing. Flat looks, sketchy icons, dark themes, lack of options (in GUI at least)...
But you're right, I'll always find bugs and issues. I was made like that: not to enjoy the beauty but instead find the defects and point at them. Curse of my life.
Top
Post Reply
8 posts • Page 1 of 1

Return to “Other topics”