wondering, since this has appeared on more than a few occasions, if some well informed Mint 20.3 Cinnamon user can possibly explain what this 'semi-transparent red /orange bar' in the attached desktop screenshot pictures (red / orange bar at the very top of display screen) represents. i do not remember seeing this 'orange bar or warning or alert etc' ever before in my experiences using Mint 11 ~ 16 as daily driver (i recently have migrated over to 20.3 Una) ...and this semi-transparent red /orange bar feature/phenomenon has been quite a curiosity to me since i have started using 20.3 a few months back. no major urgency frankly, this 'semi-transparent top red / orange bar' across top of screen display does not cause any issues for me (seems to be a warning/alert of some sort related to app function or window focus or some such) ...and this red/orange bar seems to disappear as quickly as it appears mostly (and once it's gone, it is gone, and does not interfere with Mint or any current running apps etc). anywayz ...would like to know exactly what this feature (or bug) is and what causes this red/orange bar to appear occasionally. sincerely appreciate any info on this if someone has a spare moment and recognizes what this function/feature/bug is in Mint 20.3 Cinnamon, and can shed some light, thanks very much ! 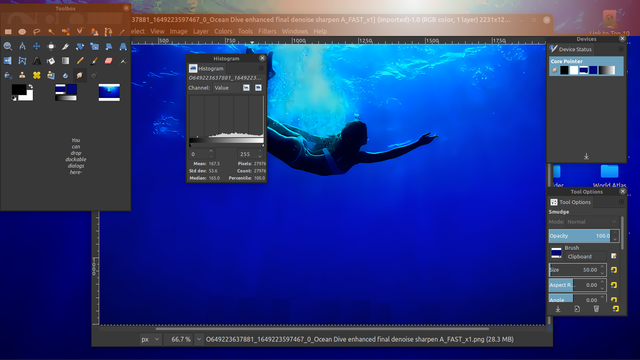 thanks for the insight, much appreciated. would you possibly know how to fully disable it ? perhaps it requires an additional terminal command etc, as i did have Window Tiling & Snapping disabled in the Mint system preferences.
Last edited by cheZ on Thu Jun 23, 2022 3:26 am, edited 2 times in total.

ahh yes. well i just noticed that even though i had the main Window Tiling toggle switch set to disabled since install ...i just now RE-enabled it, and then double-checked Window Tiling pref pane and yes, there were in fact a couple of those tiling option settings there that had been enabled by default i guess that i must have missed before i had completely disabled all Window Tiling (these option settings are enabled by default i guess > Show snap-on-screen display & Show tile heads-up-display). anywayz, i turned those 2 option settings Off, and then i fully disabled Window Tiling again turning off the master toggle switch in it's pref pane. hopefully that should do it. thanks again for your informative insight, very much appreciate you responding !

** UPDATE ** sadly disabling ALL those Window Tiling option settings / prefs as i outlined above actually had no effect at all. i just forced the red/orange top bar banner to re-appear (using Ulauncher this time) ...so perhaps (especially if no one else has experienced this, or it doesn't seem familiar or common) maybe then it's simply just an odd system quirk or glitch in Mint 20.3. thanks anyway for attempting to clarify what this might be, i actually did some extensive searching online: google & various other forums & even reddit etc, but sadly could not find any mention or reference to this red/orange top bar banner anywhere.
Last edited by cheZ on Thu Jun 23, 2022 1:51 pm, edited 2 times in total.

Open the login screen settings and activate the guest account. Reboot and log in as guest. Do you get the same there?
Top

thank you for responding. i tried your suggestion (logged in as guest and also tried shutting down and restarting a few times as well), but unfortunately this does not change anything ...i am unfortunately still getting that odd red/orange bar banner at the top of screen. thanks anyway, thinking it must just be a weird system glitch ...so guess will just live with it and look forward to Mint 21 updates that may solve this issue / bug, thanks again for trying to help.

My advice with the guest account was for finding out, if this is an account problem or a system problem; now we know, it is a system problem.
Restore the last Timeshift snapshot before the problem started.
Top

understood, thanks very much for the advice. this particular quirk / issue / bug has been observed since day 1 of my 20.3 Una (edge) install, so there is no Timeshift to revert back to. not a huge deal, as mentioned, this red/orange bar banner quirk only shows up occasionally (and quite briefly for a second or 2) usually when opening the odd program here or there (happens occasionally when opening Gimp or Ulauncher for instance) and since this issue/bug is not affecting functionality of any programs or Mint in general, and based on my own experiences in having used other Mint versions for years that also occasionally had a quirk or 2, this kind of minimal odd glitch in Mint 20.3 (no operating system is ever without it's own odd glitch or bug here or there) does not really bother or propel me to undertake a complete fresh re-install of Mint 20.3 (with all that goes with that undertaking) ...frankly i was simply hoping to get this mystery / curiosity explained somehow (initially i even thought maybe that this was some kind of new feature in 20.3 possibly), so my asking about here was to hopefully maybe find out what exactly was causing it. i do truly appreciate you taking the time to offer your insight, advice and suggestions, thanks again Cosmo (and antikythera).

Does it show up when you boot to a live session?

If it randomly shows up, it could be related to a hardware issue. Looking at the top screenshot you posted, the windows are not aligned, but the bottom of the orange bar is in exactly the same place all the way across the screen and it is in the exact same place on the screen in the lower screenshot. That strikes me as a hardware-related issue.

hi there SMG, nice to see you again ! well, other than this occasional (every blue moon) appearance of this red/orange banner quirk ....Mint 20.3 runs exceptionally well on this Thinkpad, so no complaints on that front. although could be a hardware issue as you said, although booting from a live install Mint 20.3 Edge ISO a few moments ago several times (from the exact same USB i used for the original install with the same original ISO), i cannot reproduce this same red/orange banner quirk/glitch. i did some additional internet searching today (google, this forum & other forums, blogs etc) to see if i could even possibly find any posts at all regarding the appearance of this red/orange banner elsewhere in any other given scenario/circumstance/situation ...that maybe someone else may have also experienced this somehow some way on their Mint system (figured that surely some mention must be out there on the inter-webs) ...but i was not able to find anything nor any mention of this same or similar red/orange banner bar. regarding the window positions in those screenshots you mentioned ...i had moved windows etc around a bit before actually taking those screenshots, so that is why the windows are not aligned in any similar fashion. also those screenshots were taken some months apart ...the one with Gimp open was taken not so long after the initial install on a new M.2 SSD ...the second screenshot taken just a few days ago. thanks for taking the time to offer your always helpful advice & insight, like you mentioned, perhaps it is hardware related in some way, or maybe an affect related to window titling/management notifications etc as mentioned by antikythera ....or maybe something related to push notifications or window focus or even Nvidia or display issues, at this point not sure what to make of it ...certainly is an intriguing mystery in some sense. thanks again for trying to shed some light, always helpful !
Last edited by cheZ on Sat Jun 25, 2022 5:29 am, edited 1 time in total.

or every orange moon

cheZ wrote: ↑
Fri Jun 24, 2022 9:32 pm
regarding the window positions in those screenshots you mentioned ...i had moved windows etc around a bit before actually taking those screenshots, so that is why the windows are not aligned in any similar fashion.

My point was if it was related to individual windows/tiling then I would not expect the bar to be a straight line all the way across, but it is. It also appears to be the exact same vertical height in both screen shots.

The only other odd idea is perhaps this is some type of dock across the top that is starting to show when it should not be?

ahh, i now understand, sorry for the confusion. yes, you are correct, that red/orange banner bar is always the same ...exactly the same height & width actually, whenever it shows up (every orange moon, yes !

). i do have Plank Dock on the very top of the display in the center with auto-hide configured (Plank was one of the first things that i installed in this new install), so you may be on to something there SMG. i will change the location of Plank Dock, and play around with some of the programs (Gimp, Inkscape, Ulauncher etc) that mostly, when opened, seem to occasionally prompt that red/orange banner bar quirk. and then with some testing we'll see if perhaps it is Plank Dock (and it's top center placement or prefs/config) that is possibly causing this issue somehow, or if possibly Plank's auto-hide function is maybe in conflict with some of these programs when they first open. excellent call SMG, with any luck, this may lead to the solution/fix ...and hopefully will solve the mystery of the red/orange banner bar ! thanks very much, will update you once i have had a thorough run at checking out & testing all of the above

cheZ wrote: ↑
Fri Jun 24, 2022 11:17 pm
it is the "auto-hide" option of Plank Dock that is causing this red/orange banner bar issue when Plank Dock is positioned on the "top" edge of the desktop

Here are Bugs: Plank and apparently Ubuntu also tracks bugs for it here.

You're welcome. Please go to your first post in this topic, click the pencil icon, and add [SOLVED] to the beginning of the title.

thanks for those links SMG, will head over there & post. appreciate you taking the time, and all your help !