by MCDELTAT
After lots of spontaneous frustration of getting my Nvidia drivers to work again, deleting cinnamon, etc I am now back to a working desktop, but now have the ugliest theme in the world.

Simple question: What is the default Mint 18 Cinnamon Theme? Where can I find a version of it online?

I looked at the ones in Appearances>Themes. But none appear to be the default. Mint-Y looks close, but then all my icons look horrible and the menu is white with a horrible layout. And by default theme I mean, the one that boots up even on the Live USB installers. The black menu, black bar, square icons, etc. Any ideas?

Thanks for the help.

by xenopeek
Here is a screenshot of Linux Mint 18 Cinnamon default themes (click to enlarge): 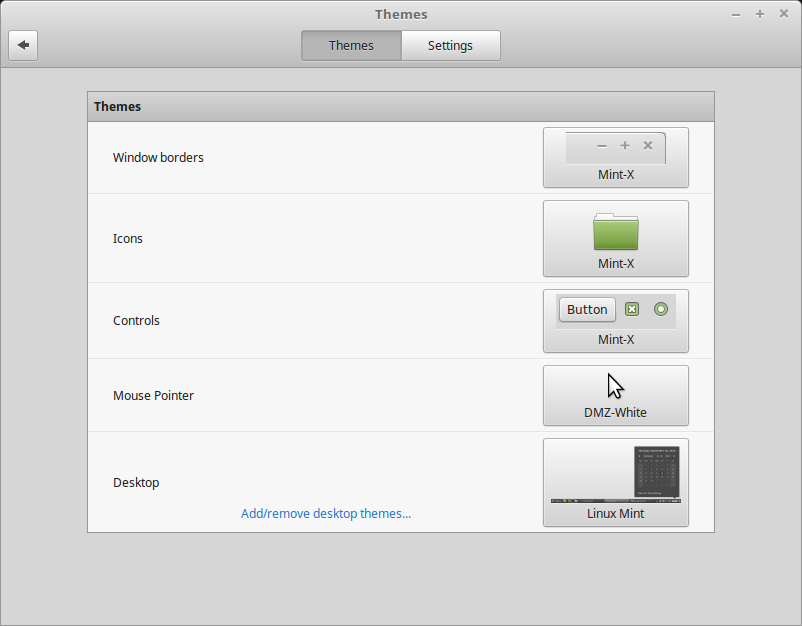 by MCDELTAT
@xenopeek that helps fix 90% of the issues so thanks. Unfortunately however, my current display does not have a UI selection for "Desktop" where you have "Linux Mint" selected. Where can I access that? That appears to be the final standout where my panel is still white and my menu is still white with a funky layout.

Thanks for the help.

by Penn
What do you mean by "deleting Cinnamon"? Do you have more than one DE installed (Mate, XFCE, KDE, Gnome)? Is this even a Mint install and if so which? I would guess it is 18.x since Mint-Y is there.

Not being sure what you meant by deleting Cinnamon I can only guess you uninstalled it then re-installed. If so, how? What follows is a complete guess since I am just making assumptions about all the answers so far.

My first step if I was in your situation would be looking in Synaptic Package Manager to see if there are broken packages or if you might have missed a vital piece of the Cinnamon install. My first thought is either cinnamon-settings-daemon and cinnamon-control-center but since the settings daemon is a dependency of control center (if I recall correctly) I'd start with control-center. It would seem to me either a dependency or recommend didn't get installed which is possible since by default mint doesn't install recommends. In Synaptic, find and highlight cinnamon-control-center (that may not be the exact name) and choose properties. One of those tabs shows all the depends and recommends. Or maybe just choose to reinstall after making sure the box in preferences is checked for treating recommends as dependencies. While you're at that the command to tell Mint to do the same with Software Manager since I am assuming you used that to reinstall cinnamon.

In reality I don't know what the issue is but those would just be my first steps in figuring it out. Oh, and since this is the themes, icons and wallpapers section maybe a new thread in an area more attuned to the actual install is in order (unless what I just suggested helps).

by MCDELTAT
Yes, apologies for vagueness. My DE had been stable for quite some time using Nvidia driver 370. I installed Wine, going full-screen using a windows app crashed my DE so I reset my computer. From then on out, initial boot would cause cinnamon to crash. I removed wine completely since that was the only thing that changed and no luck. So I followed some ideas found here: viewtopic.php?t=232151

Basically I reconfigured my drivers, updated to 375, nothing. Ran this to remove Cinnamon completely and reconfigure it.

That didn't work either so I followed further, installed MATE as my DE, booted into that from login, and then ran

That finally got me into cinnamon without crashing. So finally ran

Now restarting and is perfectly stable and predictable, with the exception that the default Mint 18.0 styles are simply gone. I don't have a "Themes" app, but rather "Appearance", etc.

I booted 18 into a VM so I could see how the default themes look. Running:

on both systems, I noted the packages are both the same, I did the same for several other things related to "theme" packages, etc. Not at that computer right now, so wouldn't be able to post a screenshot, but there's just no way to get back via a GUI.

So I guess the better question now is: what defines the "appearance" of the default Mint 18 install? What packages? What files? Once that is answered, I can just get those files from my VM and reconfigure things.

MCDELTAT wrote:So I guess the better question now is: what defines the "appearance" of the default Mint 18 install? What packages? What files? Once that is answered, I can just get those files from my VM and reconfigure things.

Now I understand a bit more. I quote just this line because it seems to be at the core of the issue. What defines the appearance in a Mint 18 install is the DE and you have 2. It seems even with Cinnamon running Mate is trying to set the appearance but Mate doesn't use the cinnamon.css file for the "Desktop" settings.

All over these boards I see people talking about the fact that multiple desktop environments can cause issues. Cinnamon in particular doesn't seem to work and play well with others. People more knowledgeable than I am have even frequently said the best solution is to reinstall from scratch. If I was in your shoes I would want to make certain all other alternatives were explored first. I guess I would start with removing mate and rebooting and then going the synaptic route I mentioned. The addition I would make is try to reinstall cinnamon and see what synaptic says or if it picks up anything that the original reinstall didn't get due to Mate being in the way or even if it tells you there are broken packages. In there you will also be able to see if residual Mate packages are still installed.

I do still think cinnamon-control-center or a dependency is what directly controls the themes used and the settings-daemon is how you choose which theme it is set to use. I could be wrong.

Maybe someone with more knowledge will pick up on this but only a handful of the highly knowledgeable seem to find there way to this sub-forum (xenopeek being one of the few).

edit - If you hadn't set the recommends I mentioned in the line command, I think dpkg, apt and apt-get will ignore recommends.

by Penn
One other thought, what happens if you try to open with the terminal command