Ok, i cahnged theme for Linux Mint after install, added new icons, and decided to ask comunity, which look they prefer?

I think that black theme with papirus icons should be default for Linux Mint!
Maybe we can affect developers to change default theme and icons?

If you prefer black theme with papirus icons, please vote, and give me like, on that way developers will know what users like most.
Thanks. 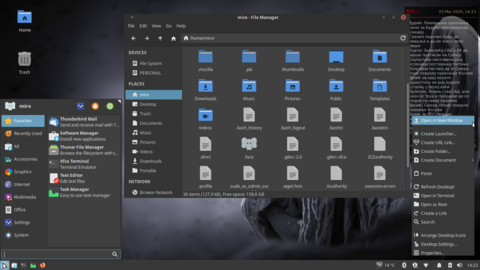 Re: New Look for Linux Mint

I really like the look. I'm a big fan of dark themes and always use them when I do a fresh installation. I think it would be great to have it as default, as it would save a lot of the initial tweaking.
Mint MATE 20.1
Top

Re: New Look for Linux Mint

I prefer Marwaita icons and think those, plus the Adapta theme should be Linux Mint's default themes, but then again, that's most likely because I personally love those themes, probably not everyone feels the same way about them.
I personally really don't like dark themes either (most other people seem to really love dark themes thou) I just don't see the charm.. However, Adapta-Notko (Adapta's dark theme) is the most highest rated downloadable theme in the theme-settings. I however prefer the lighter version, a good mix of dark and light colours.
The reason I like the Marwaita icons are because they feel pretty streamlined, look very professional and serious. I'm not a fan of the square design of Mint's default icons, I used to like that design back when I was still rocking Ubuntu with Unity, but ever since moving to Linux Mint with Cinnamon, I just had to change, the square icons does not look good as desktop icons (which Cinnamon enables by default.) ..In my view.