Anything related to gaming on Linux Mint including game discussion or questions concerning Steam or Wine.
Forum rules
Before you post please read how to get help
Post Reply
24 posts

As an old Amigant I use FS-UAE which is the best emulator of the Amiga. For retro consoles I use multi emulator called Mednaffe (Mednafen GUI) and both are great. For a controller I have Logitech F710. I also have over 100 games on Steam and most of them are retro-style games. I also played some DOS games on Dosbox which were mostly old school FPS like Blood, Shadow Warrior, Hexen, Heretic etc. I was kid in the 90's, so I'm barely interested in modern games with photorealistic graphics.
Linux Mint Mate 20.3 on 🥔 HP550 Laptop (2008): Core2Duo T5270 1.4Ghz, Intel GMA X3100, 4GB RAM, AData SU650 120GB SSD.
Top

I found Retroarch to be clunky and just unpleasant to use, easier to just get the emulators you want unless you plan on using a lot of different ones.

I have PCSX2 running and it runs just fine. Some games you have to change some settings like the renderer, etc but you'd have to do that on Windows as well. Runs great otherwise.
Only issue I've had is it randomly stopped recognising my PS5 controller, then when I tried it again a few days later it was working fine again. Not sure what happened there.

Having all your emulator separately manually installed just makes it easier to manage things like save files, configurations, or if you want to reinstall it.
Top

Nikolai5 wrote: ↑
Fri Jan 14, 2022 8:46 am
I found Retroarch to be clunky and just unpleasant to use, easier to just get the emulators you want unless you plan on using a lot of different ones.
...
Having all your emulator separately manually installed just makes it easier to manage things like save files, configurations, or if you want to reinstall it.

I thought that the first time I tried Retroarch. The interface was a bit annoying, and it took a good bit of time to set up.

But now that I have it set up, I really like it. Everything is in one place. Everything works. You get a nice menu of all your games.

So, after the initial set up with Retorarch, I think it does accomplish the things you mentioned - managing save files and configurations in one place.
Top

Mednaffe is better than Retroarch. It has a normal GUI and you can add folders as game lists for all of your platforms you want to emulate. Never had a problem with the emulation and it works well on my potato laptop. I mapped my Logitech F710 to have layout close as possible to original controllers. In some games analog sticks are an improvement over d-pad, especially for those old school shoot-em-ups. And for the Amiga I have a button for jump which is farmore comfortable than UP on the d-pad/analog stick.

As a fan of Columns (Sega Genesis/MegaDrive) I found a perfect clone for the Amiga called Crazy Collumns. I really recommend you to try this game. And try out the impossible difficulty with absurd amound of colors which make Columns CRAZY. I need to play Crazy Columns in 2 player mode with
my friend. Good he has Logitech F710 gamepad too he uses to mostly for playing Tetris on the NES emulator. 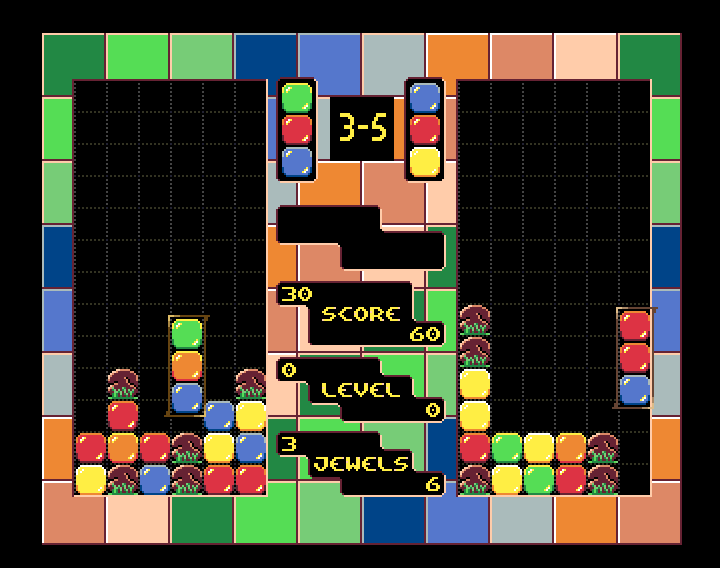