by gvsa123
In pop_os! one of the features I liked was how the number of workspaces would automatically adjust as the user places and removes windows and apps in them. I would like to see this incorporated into mint.

I think pop_os defaults to having two workspaces (can't remember), but either way, having all those workpaces to cycle through in Mint when you don't need them is kind of cumbersome[?] and it would be intuitive I think to just have one workspace by default and have the system add one, either to the left or right depending on where the user first moves a window/app. As workspaces are emptied, then they are removed accordingly. This way too, the user will not have gaps in workspaces such as when windows are active on workspace (WS) 1, and forgets that the other window is open on WS3. User then has to go through an empty WS2 to get to the app on WS3 (or worse, WSn), when the system could have figured this out as soon as WS2's windows and apps were closed. I'm not sure that this would be taxing for the system.

One thing I would add too is a way to close all open windows gracefully. This is especially helpful when preparing to shutdown, or simply just wanting close all active windows where the user can be prompted if something needs to be saved as well. This saves the user from having to cycle through all of the workspaces to track down which applications have to be closed - and then have to close them one by one. When running i3-wm, I have a script that does this for me as I would have lots of WSs with different applications running. This would be really convenient in Mint. Right now, there is a way to close a workspace that moves all active windows to a different WS (to the left?), but you have to manually add a workspace later on, if you want to transfer a window to a new one. You can't just move a window to the right after closing all workspaces (except 1). Again another added step that the system could have figured out.

Um... to whoever who might have the skills to do this, could you PM me, as I'm only starting to learn python and would like to see how something like this gets incorporated to an already existing system.

Re: Automatically add and remove workspaces

by smurphos
Re closing all windows gracefully - This is for Cinnamon implemented via a nemo action. The underlying script should be DE agnostic and could be re-purposed. 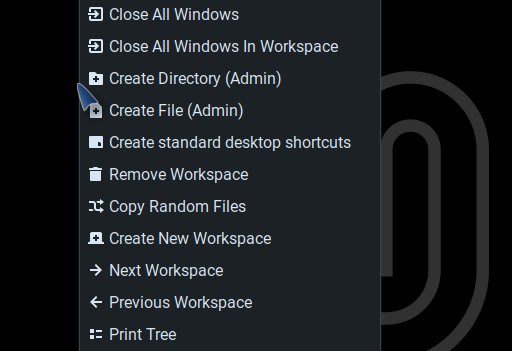