Write tutorials here
There are more tutorials here http://community.linuxmint.com/tutorial/welcome
Forum rules
Please don't add support questions to tutorials,start your own thread in the appropriate sub-forum instead. Before you post please read this
Post Reply
34 posts

Between a bug in gvfs and Sambas decision to disable SMB1 on both server and client the following problems occur:

You will get a Failed to retrieve share list from server: error followed by one of the following:

There are three ways around this issue:

[1a] You could override the default setting of Samba and reinstate SMB1 ( Samba calls it NT1 ) on all your Linux machines.

Edit /etc/samba/smb.conf and right under the workgroup = WORKGROUP line add these:

You will have to do the equivalent to your Win10 box.

Or you can keep smb.conf as it is without SMB1 and do one of the following:

[1b] You can bypass the gvfs bug and connect to the server directly by name and share.

So in Connect to Server for example:

[1c] Bypass gvfs entirely and do a CIFS mount which is controlled by the Linux kernel and is above all this nonsense.

For more on a CIFS mount please see: Automount Samba Shares with CIFS:

mount.cifs mount will also negotiate the best smb dialect ( between SMB2.1 and SMB3 ) but it is free of the gvfs bug.
This can be set up in fstab ( with a syntax change ) so you don't have to mount it manually.

[2] Connecting to a server that only uses SMB1 - many NAS and Routers do that:

There are 2 ways around this issue:

[2a] Reinstate smb1 on the client side of Mint:

Edit /etc/samba/smb.conf and right under the workgroup = WORKGROUP line add:

And you may need this one as well

Note: If you have a client to this machine and it can only access it with SMB1 you need to modify the server settings on Mint:

This can be set up in fstab ( with a syntax change ) so you don't have to mount it manually.

Special Note: Should you decide to reset yourself back to SMB1 levels and you are using Legacy unsupported versions of Windows ( i.e. anything earlier than Win10 ) you need to follow the old NetBIOS rules: Samba Browsing Problems Checklist
Last edited by altair4 on Wed Sep 16, 2020 1:17 pm, edited 11 times in total.
Please add a [SOLVED] at the end of your original subject header if your question has been answered and solved.
Top

I've rewritten this thing. It became clear I spent way too much time explaining "why" these changes happened and not enough time how to mitigate them.
Please add a [SOLVED] at the end of your original subject header if your question has been answered and solved.
Top

I assume this presupposes the presence of samba. Is there a way to effect this without samba? (And I assume NOT smb4k?)

My working methods require Thunar access to other machines and the lack of this is very annoying. Warpinator is touted as the answer and seems good at what it does, but it is not grown-up enough to replace Thunar's Network access.
Top

I do not understand your post. This is a HowTo about samba so yes samba is required. You may not need or want the samba server package installed unless you want others to access your box but you will need a smb.conf present to make some of the changes described above. Since Mint installs the smbclient package by default you already have a smb.conf file.

Thunar doesn't have a "Connect to Server" option but you can use the Location Bar in thunar to do the same thing or use Gigolo.
Please add a [SOLVED] at the end of your original subject header if your question has been answered and solved.
Top

Thank you, that was the clarification I required. Sorry if I wrote it badly.
Top

Thank you altair4 - this solved my problem connecting to an old NAS box !
Top

fixed my issue on a newly converted mint 20 computer.

Slowly but surely all my computers are being converted to mint machines.
Top

SMB1 protocol is very old and vulnerable. I would rather not use it. My opinion is that the device that can communicate only over SMB1 is for discard.

SteveR wrote: ↑
Wed Jul 22, 2020 3:15 pm
The SMB1 protocol may be very old and vulnerable. The question arises as to whether those supporting SAMBA will be updating the program to incorporate a current secure protocol that works under Linux.

I have rewritten this HowTo once and it looks like I need to do it again.

Options [1a], [1b], and [1c] are meant to be logical OR's. You can do [1a] if you want. But you can opt to keep smb.conf as it is where SMB1 is diabled and do [1b] or [1c] which will then access your servers with an smb dialect somewhere between SMB2.02 and SMB3.11 - it's a negotiated process between client and server.

To be sure if your other machine is running an operating system that went end-of-life 11 years ago like WinXP you are pretty much hosed ( a sysadmin term ). You are going to have to dumb down your Linux box quite a bit to work with something like that.

Just to be clear, this is not a samba issue this is a "discovery then access" issue. Although Linux is hampered with a buggy gvfsd-smb-browse process that made things worse it is not alone in this. Any operating system that disables smb1 will have this issue.

I run Windows 10 the way Microsoft wants me to run it with smb1 disabled. Win10 cannot "see" my Ubuntu server if I browse for it ( at least not without WSD ). MacOS can not "see" my Win10 box in Finder. In all cases I can connect to these machines if I ask for it explicitly (\\ubuntuserver.local in Windows, smb://win10.local/share in Linux or MacOS ) and when I do that it will be with an smb dialect greater than smb1.

Thanks AndyMH, you're my biggest only fan.
Please add a [SOLVED] at the end of your original subject header if your question has been answered and solved.
Top

forgive my lack of understanding.
Could someone please explain what i add into this line and whether its done once via terminal?

and what am i missing for the mount-point? where do i get that info from

I would like to draw your attention on wsdd daemon, https://github.com/christgau/wsdd . It implements a Web Service Discovery host daemon on Linux. I configured it a few months ago on LM 19.3 machines, before upgrading to LM 20. I cannot remember exactly how I did it, but it functioned. In LM 20 I did not configure it because I do not use Windows 10 alot at the moment.

Another topic .. another Howto: [Part 1b] WSD = WS-Discovery
Posted that a while ago.
Please add a [SOLVED] at the end of your original subject header if your question has been answered and solved.
Top

Really 5 years ago? I did not know that that thing is so old.

I constantly update my tutorials ... well ... most of them. I think I added that to the original 2 maybe 3 years ago.
Please add a [SOLVED] at the end of your original subject header if your question has been answered and solved.
Top

Hi all
My question is then, what would I enable out of the options provided?

So which practice is recommended:

just been experimenting and used the following in my LMDE4 smb.conf and seems to be working.

Applied the same configuration into the following distro's and had no results. Only luck im having is with lmde4 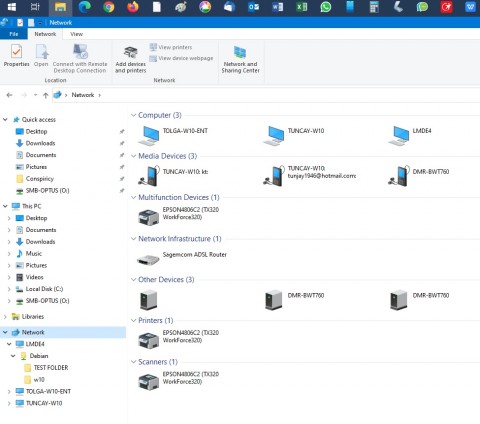 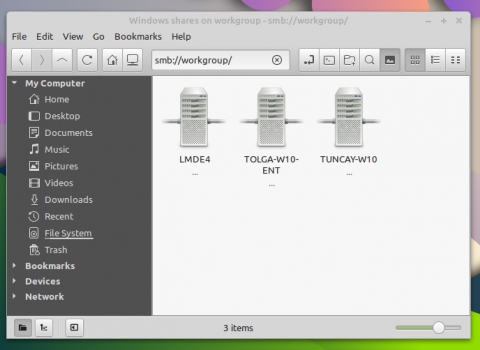