Here's a thing that's been annoying me a little on the rare occasions that I find reason to change display settings: 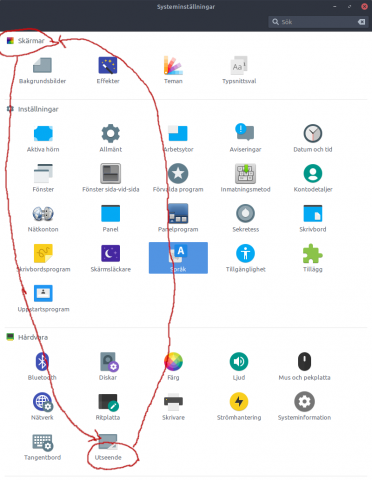 I had a look at the strings on Launchpad (... I hope), and I won't rule out that the problem is in the original.
First, check that 'Display' refers to two different strings depending on whether it is used for a physical monitor/display hardware or configuration options for what to put on the display.
Second, denote more clearly which is which. (Put simply: Clarify noun or verb cases.)

I sent in suggestions on Launchpad for what I think are the relevant strings, but I want to be clear that I know better than demanding that they're implemented without review.
Top

The people in the Swedish translating team on Launchpad are the ones who can fix this. If you want their attention for your suggestions on Launchpad, I recommend to send them an e-mail. With links to the strings in Launchpad for which you've submitted suggestions.

I'm a translator there as well (for Dutch, obviously), so I know that that's the way to prevent your suggestions from going unnoticed.

Heh, fair enough! Thanks, I'll do just that. I got some... troubling signs when I tried to report it as a bug, but I didn't attempt direct messaging at the time.
Top

For the sake of completeness, this is the place for Swedish translations for Mint:
https://translations.launchpad.net/linu ... t/+lang/sv