A friend has asked me to istall Linux Mint v9.1 <ate on his computer.

However, there is a problem as he has gone on holiday and I am ubablke to access his Windows 10 system, as he did not provide his password. I have sent him a text but so far had no response.

So, I booted into Linus Mint using a USB thumb drive without any problem.

Accessed the Windows Disk through Linux and found the disk has five partitions, one of which is shown as 'free space' space f 44 GB 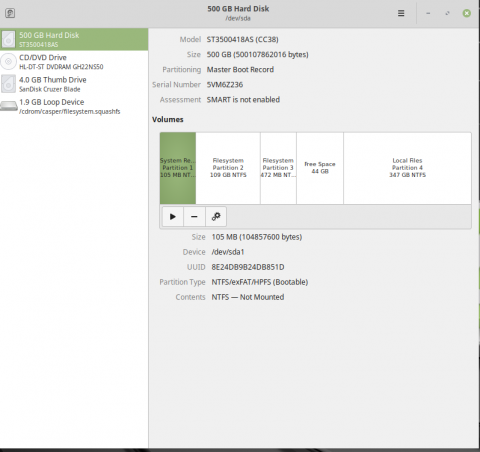 Launched gParted and confirmed the partitions. 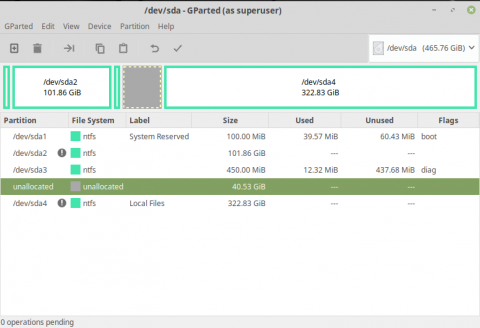 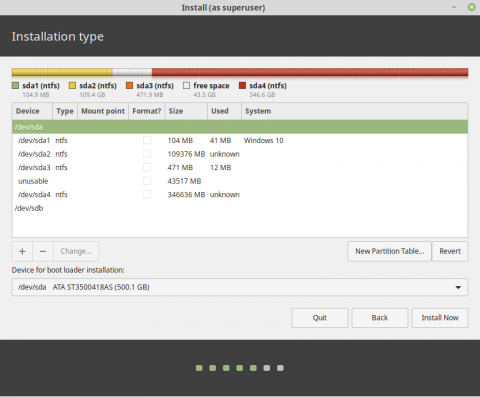 Is this because of the restriction to four partitions?

Went back on the installation screen and saw there was an option to use LVM but was reluctant to proceed in case by doing so I messed up the W10 installation.

I have thought of resizing the /dev/sda3 to 350 MiB and but this would not get over the four partition limit, if this is the problem.

Your advice is sought before I proceed, please.
Last edited by tenfoot on Thu Jun 20, 2019 4:15 pm, edited 1 time in total.
tenfoot
"Light thinks it travels faster than anything but it is wrong. No matter how fast light travels, it finds darkness always got there first, and is waiting for it." Terry Pratchett (Reaper Man)
Top

athi wrote: ↑
Tue Jun 18, 2019 7:38 am
Cannot tell you how to correct this issue without making massive changes to the Win10 installation, which could result in data loss and breaking Win10.

Yes, that's my fear, too. The owner has given me another HDD. If I fit this I presume it will appear as dev/sdb. If I install Linux Mint on this partition, will I still us dev/sda for MBR, i.e. on boot up will I then have the choice of booting Windows 10 or Linux Mint?
tenfoot
"Light thinks it travels faster than anything but it is wrong. No matter how fast light travels, it finds darkness always got there first, and is waiting for it." Terry Pratchett (Reaper Man)
Top

When you get to the installation screen, you will point the installer to sdb and there will be a section at the bottom showing where the boot loader will be installed. Click the pull down and change it to sda, see below. If you install the boot loader to sdb, Win10 and Mint will be on discrete hdd with discrete boot loader and you will need to go into bios boot option to pick the hdd to boot from. Loading boot loader to sdb might be a better option just for trial and if the owner likes Mint, you can delete Mint and reinstall with the Linux boot loader on sda. Edit: I have my guest PC setup with Windows and Mint on separate hdd for when I have guest that only use Windows. All I have to do is change the boot order in the bios and PC will boot to what ever hdd is first on the list without interaction from the user. Cuts down a lot on questions.
Mint Mate 19.1. Main rig is HP 800G2 I5 6500 16GB ram, 120GB boot drive, 2x3TB, 1x4TB data drives. Oldest rig is Mate 18.3 on Dell D620 with 32bits core duo.
Top

IIRC (and it is some years since I've needed to, but Hiren or UBCD4Win has a Windwoes Password reset utilitiy. I think it works on 10 (can't recall) but it definitely does on winwoes 7.
Fully mint Household
Out of my mind - please leave a message
Top

After some more discussion with the owner, he told me he had several other computers with Windows 10 installed and asked me to remove the Windows 10 HD on the computer upon which I was to install Linux Mint, and provided a 240GB SSD on which I have now installed Linux Mint.

tenfoot
"Light thinks it travels faster than anything but it is wrong. No matter how fast light travels, it finds darkness always got there first, and is waiting for it." Terry Pratchett (Reaper Man)
Top
Post Reply
6 posts • Page 1 of 1