Questions about Grub, UEFI,the liveCD and the installer
Forum rules
Before you post please read how to get help
Post Reply
8 posts • Page 1 of 1

SUMMARY: Installed Linux Mint Xfce 19.3 (64 bit) in LEGACY mode. Xfce works but can't access Windows & I can't reinstall in UEFI. Realized now mixing UEFI & Legacy was a bad move. Would like to re-install and looking for a way to make it work.

Installed Xfce on a Sony VAIO. After restart got the following message:

It kept restarting and giving the same message.

So I hit the "ASSIST" button that pulls up the BIOS and changed the boot mode to LEGACY.

Using the Live USB, I installed Xfce again, and it worked.

Now, Xfce is running mostly fine (occasionally the keyboard doesn't respond but restarting fixes that) but I can't access any dual boot menu. It boots directly into Xfce. From these forums I see "It's normal for Mint installed in BIOS-mode not to find Windows installed in UEFI (and vice versa). "

I'd like to reinstall and do this right, and get into Windows if possible. I've been throwing lots of different approaches at it, including:

Tried running boot repair (put the ISO on an USB), get the message "The current session is in Legacy mode. Please reboot the computer and use this software in an EFI session."

Tried changing to UEFI, and running the Live USB (to try to reinstall Linux in UEFI), but get the same "Something has gone seriously wrong" message as earlier.

Tried using Boot Repair to Uninstall Linux & I got the same "This is currently in Legacy mode..please reboot computer and use in an EFI session".

Reading about UEFI: https://www.happyassassin.net/2014/01/2 ... work-then/
"I really can’t recommend strongly enough that you do not attempt to mix UEFI-native and BIOS-compatible booting of permanently-installed operating systems on the same computer, and especially not on the same disk. It is a terrible terrible idea and will cause you heartache and pain. " Yup, the pain is real.

So the bottom line is, Linux is working well enough on it's own, but I'd like to start over, do it right and be able to get back into Windows. All ideas/suggestions welcome. Thank you!
Top

READ: How To Get Help!
Top

Thank you! I will give it a shot and come back here to update how it goes.
Top 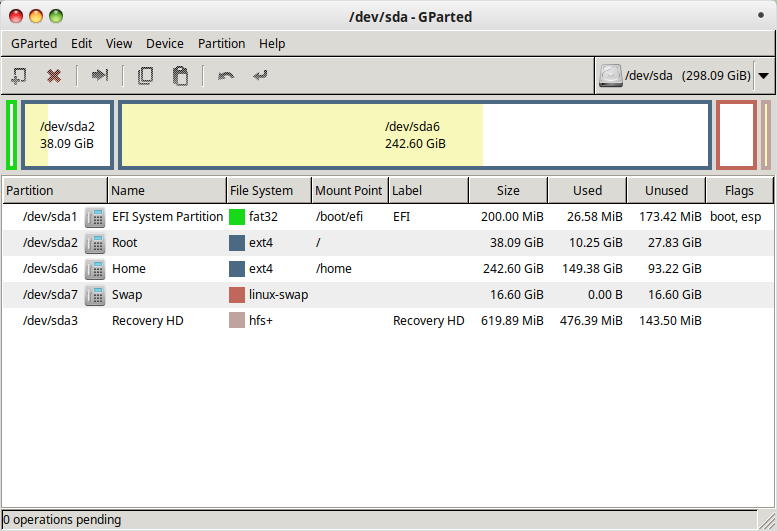 When you boot into the LiveUSB, open Gparted and see if you have an EFI partition. If you do (and it seems as if you should) make a note of the partition because that is where GRUB must be installed. In the screen shot above, the EFI partition is on \\dev\sda1 not just on sda.

When you install Mint, choose the Something Else option. You will be at the partition screen. Set your Mint partitions (/root, /home, and swap) but do NOT touch the EFI partition or the Windows partition. At the bottom of the screen is where you put the location for GRUB. Change that to where the EFI partition is located. In the screen shot above it is \\dev\sda1. Yours may be different, so be sure. This way GRUB will be in the EFI partition where it belongs and you should have both Mint and Windows as options in the GRUB menu.

When you are done, you can customize your GRUB menu with backgrounds and such. You can see many choices here at Gnome-look. I use the one from Fallout (currently, it's number 42).
Top

Thank you kukamuumuka, I am trying to get rEFIND to work. I got a bit lost when the instructions said to "use the refind-install program's --usedefault option, and perhaps the --alldrivers option, as in bash refind-install --usedefault /dev/sdd1 --alldrivers to install to the first partition on /dev/sdd". My USB has my Linux LiveUSB (which I'd prefer not to erase) so I need to get another USB and try unzipping it and having the new USB as the destination.

Thank you CaptainKirksChair, I booted into LiveUSB and opened Gparted. I found the EFI partition as described, it's on /dev/sda2
I started to set the partitions as you described but then stopped because I realized I had booted into Legacy mode. I stopped everything and restarted, went back into the BIOS setup, and changed it to UEFI mode. Unfortunately, trying to boot into the LiveUSB in UEFI mode resulted in the error message:

Do you think I should I continue and install again in Legacy mode?

Thank you both for your assistance.
Top

I am not sure why you get those messages

Linux Mint installed in UEFI should have those files in \EFI\ubuntu as the only files I see in \EFI\BOOT are BOOTX64.EFI fbx64.efi

Went and got a new USB. Wanted to try out kukamuumuka's suggestion on reFind
Tried restarting, hit the VAIO repair/recovery, and it boots into Linux Mint

Perhaps reFind has some more options, let me to https://en.altlinux.org/Rescue

Looking at the instructions for ALT LINUX Rescue, they recommend SUSE Studio Imagewriter or direct dd

I think I was not properly putting reFind on the USB

Next step: Downloading ALT LINUX and figuring out dd so I can make a bootable USB
Top

First trying to boot in Legacy mode and see what happens...

And it works! OK. Not sure exactly what to do with it, but...Will it work also in UEFI mode? lets find out...

Got a blue screen that said "MOK MANAGEMENT"...never seen this before

Start it up and I get...
a menu, GNU GRUB version 2.02, with a description then a command line (grub>)
Not sure what to do with this, and shutdown command doesn't work, so Hard shut down

Start it up via USB in UEFI mode and get the ALT LINUX Rescue screen, yes!

then it goes into blue screen...hmm.

Going to research ALT LINUX rescue and see what next move will be. Feel like I can at least fix something with what I got - maybe. Any/all advise welcome, Thank you.
Top
Post Reply
8 posts • Page 1 of 1