When I try to add the Windows 10 ISO to my flash drive I get an error of (Exit Code: 256). The USB drive is formatted as NTFS and is unmounted but it won't install.

The error certainly indicates the flash drive is formatted as FAT32. Maybe the formatting to NTFS didn't take? Or was done to the wrong drive?
My sound fix tips for Linux Mint
Top

this means your flash drive is not large enough to hold the win10 iso. i just formatted my really old 8GB flash drive which i have formatted maybe 1000 times to fat32 and i have no issue making windows usb out of it. what is the full name of your win10 iso called? are you trying to make a bootable iso from an .exe update?

did you format your flash drive with the Usb stick Formatter? 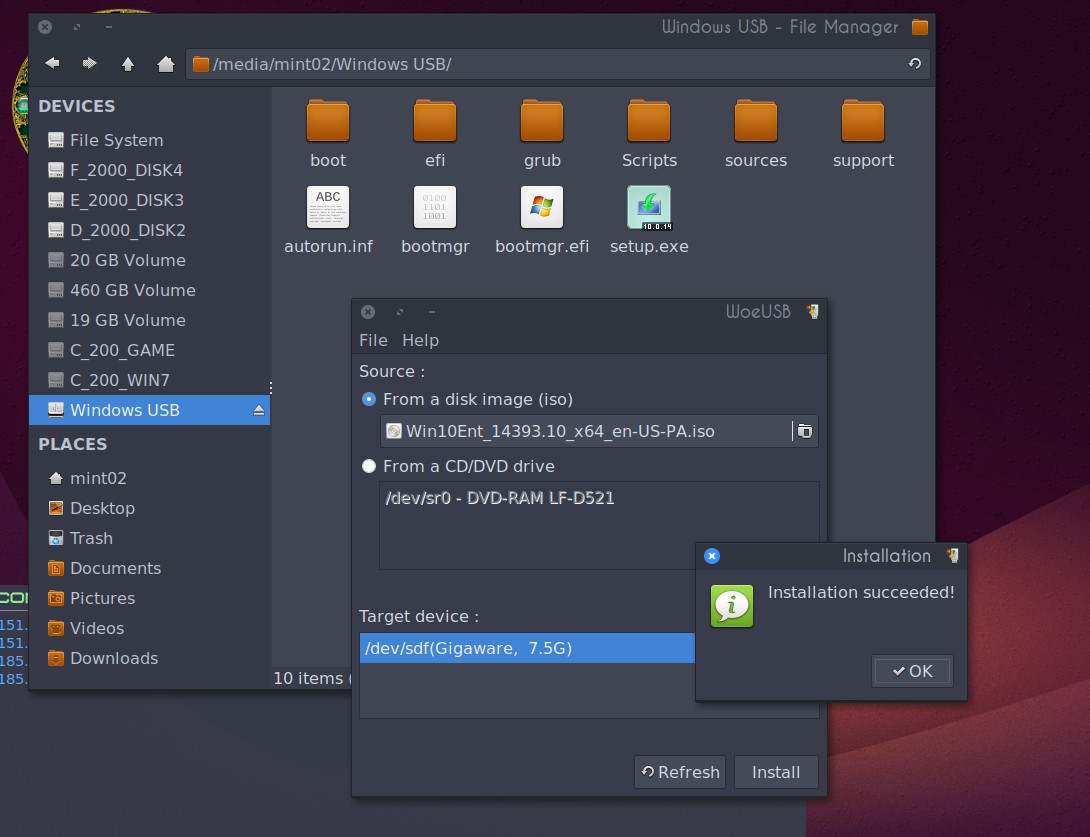 I have formatted the USB drive to NTFS multiple times using USB Stick Formatter, GParted, and Disks. All formatting attempts have been successful but the ISO won't install. The USB drive has 31 GB of storage space. The ISO file name is : Win10_1809Oct_English_x64.iso
Top

it's complaining about install.wim which is called install.esd is it larger than 4GB ? mine is 2.6GB

rightclick on the .iso and Open With "Disk Image Mounter" but more than likely your copy of install.esd is larger than 4GB which woeusb can't handle. is this an official microsoft .iso?

I have the same identical problem using Cinnamon 18.3, but I went further in analyzing it. I installed the Ubuntu repository for WoeUSB, and ran WoeUSB. My copy of Windows 7 Pro is the official Microsoft OEM compatible version, because I have an OEM MS Win. 7 Pro license sticker on my computer, which the local Microsoft rep guided me by phone to verify - it verified as good. Then the Microsoft rep guided me to create a bootable USB stick on a Windows 7 Pro machine I have, using 100% Microsoft software, and that procedure produced a bootable USB stick using my official MS .iso file of OEM Windows 7 Pro 64bit.
So I have a working copy of a USB stick with official MS Win 7 Pro .iso installed on it, made entirely using Windows software, not Linux, to compare with my WoeUSB. Both copies, my 100% Microsoft copy, and my WoeUSB copy are IDENTICAL on my computer screen, plugged in side by side into my computer, until the instant that the WoeUSB installation finishes, when suddenly it crashes in the last milllisecond of installation, and after that millisecond the two copies are no longer identical, but radically different!

Conclusion: THIS IS A VALID COMPLAINT, WHICH I HAVE VALIDATED AS CORRECT, needing attention by the gurus on this forum. The previous guru was wrong in his conclusions.
Top

PS there is no question that WoeUSB correctly formats the USB stick (I used an 8GB USB) to NTFS, because when I pre-formatted my USB stick to NTFS first, WoeUSB would NOT PROCEED to install my Microsoft OEM Win. 7 Pro .iso file into my USB stick. Only when I pre-formatted that stick to FAT 32, would WoeUSB proceed to format it to NTSF, and to complete its attempted creation of a bootable USB installer for Windows 7, where it failed at the bitter end, giving an Error code of 512 (presumably related to the Exit code 256.

Because local Microsoft rep successfully guided me in producing an OEM Microsoft Win 7 Pro bootable USB stick formatted first to NTSF, NOT FAT 32, I can attest that the original complaint in this thread is 100% valid in every neccessary detai, and that WoeUSB does not work on LinuxMint Cinnamon 18.3, and also does not work on Linux Mint Cinnamon 19.xx according to similar complaints on the internet.
Top

The official freely downloadable from Microsoft OEM Windows 7 Pro 64bit version I am using and also attempting to install on several properly license stickered computers IS 5.9 GIGABYTES because it includes everything uptated to 2019 in a single .iso file. So the USB stick has to be at least 8 Gigabytes, and it must be formatted to NTSF, not to FAT 32, because FAT 32 cannot handle any file bigger than 4 GB.

Because I have one 8GB USB stick formatted to be bootable loaded with this latest OEM Win 7 Pro .iso file MADE 100% BY THE MICROSOFT REP ON MY WORKING WINDOWS 7 PRO COMPUTER GUIDING ME, WHIC WORKS PERFECTLY, I can confirm that WoeUSB works 99.9% perfectly until the bitter end millisecond of installation on the USB stick, when at that bitter end it crashes, and in my case produces an Exit code 512. Internet reports the same problem under Cinnamon 19.xx.
Top

Actually, if this is indeed a bug, this should be reported to the WoeUSB developer(s) on their github page here: https://github.com/slacka/WoeUSB/issues

You may want to try following the instructions here to see if that changes anything.

And take note of the last bit on the page with the instructions:

Everything should work as normal — though I’m told the app may spit an error out but that the actual USB will still boot/install fine — but if it doesn’t you can file bugs on the WoeUSB Github page.

P.S. I am not a guru, I have never used WoeUSB, and I've never stayed at a Holiday Inn Express.
My sound fix tips for Linux Mint
Top
Post Reply
12 posts • Page 1 of 1