Here's one from left-field.

Does anyone know of a basic Drawing Program that works with Mint 18.? Cinnamon?

Something that would draw a house, Front Elevation - Side Elevation - Plan, along with Dimensions, would be enough, but if it did a little more, so much the better.

A Windows one that would work under Wine would be fine also.

What about LibreOffice Draw?

For what you have in mind it may be easier to use a Wacom tablet in which you can guide your stylus with a ruler.
Linux Mint 20.0 Cinnamon - 64bit
Top

Check out SketchUp. There's a browser-based version, and a Windows desktop app that can be run in a VM.
Top

Further investigation makes me think what I really need is a CAD program.

Now I notice that in Synaptic Packet Manager there is a program called "freecad", but it doesn't say it is compatible with Mint 18 Cinnamon.

It does have good reviews but what are your thoughts.

LibreCAD is probably worth a look if all you are looking for is 2D.
https://librecad.org/

I tried the free trial of SketchUp & if you are looking for 3D then it is certainly worth looking at.
https://www.sketchup.com/plans-and-pricing#for-personal

From memory the real drawback of SketchUp was that you had to be online to use it..
Top

If it is in Synaptic then you can install it safely. Also take a look at Blender (in your Software Manager).
Linux Mint 20.0 Cinnamon - 64bit
Top

I did, but after a bit more research I figure I actually need a basic CAD Program.

I have had good luck with Draftsight. It's a natural for anyone with Autocad experience. There will be a rather arduous learning curve if you don't have autocad experience. Draftsight can be downloaded as a .deb and must be registered--free but not open-source. Most of the open-source cad software will read and write .dxf but not .dwg which AFAIK is still proprietary. Draftsight will read and write native autocad .dwg files which is nice for me, as I have an extensive archive of .dwg files. One pain with DS, is that you are forced to upgrade every year, and occasionally the new version will introduce a bug or 2.

Worth mentioning is the currently available appimage of Librecad, which has the beta feature of reading .dwg files. I've tried it and it does work--to an extent, but not reliably enough for my use.Xfce

Oh, I should mention that I've tried ODAFileconverter for batch converting .dwg to .dxf and it will very efficiently convert your entire .dwg library to .dxf, but the files are mostly un-usable!

The information in this article may help:

These are available via the Software Manager in your system. Be prepared for a lengthy learning curve, Bob M. Good Luck.
Linux Mint 20.0 Cinnamon - 64bit
Top

Well this is an interesting exercise.

Thanks to all for your input.

Well the update is: I figured that seeing FreeCAD was available through Symantic Packet Manager I’d give that a go.

It installed fine, but when I went to restart I got a message that I couldn’t because a key ring wasn’t responding. (Yes I know, I should have written down the exact message)

Anyway, I left it for half an hour and it still wasn’t responding so I accepted the option to force the closure.

The computer restarted normally, and FreeCAD opened fine, but I haven’t managed to draw one line so far. Looking at it, I figure I’d learn to to speak fluent Swahili before I got this working.

So, now comes the choice of trying another.

If you go the SketchUp route there are many 'How to' videos on YouTube..
Top

+1 For sketchup under VirtualBox works great for me. I have used it for years when developing plans for around home, just to make sure everything fits. It is the ONLY program that has no real Linux equivalent. You can easily specify exactly what you want, how you want it. and work from there. All in 3D!
Fully mint Household
Out of my mind - please leave a message
Top

Well I must admit I was warming to Sketchup because it has lots of Positive Reviews but then I find (I think) that there is no Linux version and one has to run it via the Internet or VM with Winwoes loaded.

I’ve always had a phobia when it comes to relying on the Internet for anything, (and one I should get over I guess now it is a lot more reliable) and I have never used VM so am out of my depth there. I don’t still have any Winwoes OS disks and doubt they would work anyway, having already been assigned to other computers.

The annoying thing is I had a very old DOS drawing programme called Floorplan which would be fine if I could find it, (it’s on a floppy, but can’t remember if it was 5¼” or 3½”)

and encourage it to work with Wine. Just joking.

I’ve never had anything to do with VM so can it be encouraged to work without Winwoes?

Yes it is true, Bob, that if you want to use SketchUp, other than via the web, you need to run it through Windows.

From memory, when I was looking at it, the free web version is also pretty restricted as they want to direct you towards a paid version.

Also, from memory, so I could be wrong... I think that you had to run the free non-web version to Windows 10 rather than Windows 7.
I seem to remember having to load Windows 10 into virtualbox & I am sure that it was only to do with playing with SketchUp.

To setup a Windows version in virtualbox is not something that requires great computer skill, just a few easy to follow screens to set it up (& a bit of understanding of what it is doing) & then just a couple of mouse clicks when you want it to run..
You do need a Windows disk, however..
To be honest I found setting up Windows in virtualbox easier than using Sketchpad - but I claim few design skills...

I am running Sketchup 15 on w Windwoes 7 Virtual Box with NO issues whatsoever. It was as easy (if not easier than installing Windwoes "normally") Surprisingly enough, it is actually more responsive and quicker than running on s a standalone Windoze machine. It is not hard as I have not long transitioned from M$ too,
Fully mint Household
Out of my mind - please leave a message
Top

Just FYI, running SketchUp (standalone client app) on a VM is not officially supported. As other folks have pointed out, though, it usually runs just fine.
Top

I remember "Floorplan". If that is what you are after, try this:

Good find kyphi, that sure looks like the old "Floorplan" as I remember it.

Now to get it going.

As an aside, I note that in one part of the promotion it is Free, then it becomes a Free Trial, and then we run into $100’s of dollars. I usually give this type of promotion the big “heave ho” without further ado, but I’ll make an exception this time just to see.

Here is a free one, Bob and it looks like it may better serve your requirements:

After downloading, right click on the bundle and click on "Extract here" (unless you want to put it elsewhere other than in Downloads). Open the extracted bundle and use the Java icon to start the program (SweetHome3D-Java3D-1_5_2) via "Run".

This is quite an impressive program. I have it installed in my /opt directory, created a menu entry in Graphics and given it an icon. Since it is a Java program it is platform independent.
Linux Mint 20.0 Cinnamon - 64bit
Top

Ok for those still interested in this matter here is the update:

I downloaded Edraw but it wouldn’t install. Ok, that might be my fault because search as I might I couldn’t find the .run file.

Here are the installation instructions. Method two didn’t work either. 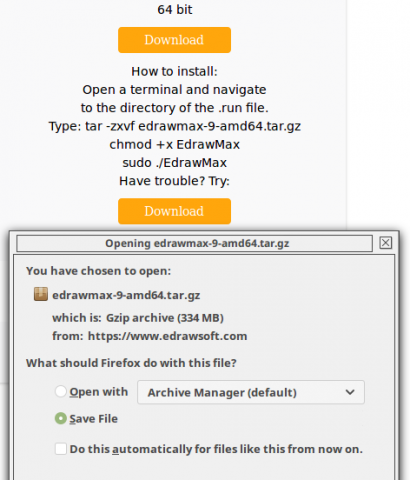 It would need to be free if it’s this difficult to install.

Downloaded, and somehow got to get it going via the terminal but can’t find it in the Menu, and I’d like to short-cut it to the desktop.