No boot with new GPU - I finally broke it (SOLVED)

Questions about hardware, drivers and peripherals
Forum rules
Before you post please read how to get help. Topics in this forum are automatically closed 6 months after creation.
Post Reply
2 posts • Page 1 of 1

No boot with new GPU - I finally broke it (SOLVED)

I've used Mint Cinnamon on this PC since version17. Been three completely different builds and done hot (online) upgrades through current 20.3. This past week I removed my RTX2080 and installed my new RTX4090. That was the only change, but now it fails to boot. I have already removed all nvidia drivers which got it further along but still just freezes on boot with blinking cursor. Nothing behind the cursor, all boot info (shown when ESC is pressed) disappears at this point with no notable errors.

I tried current OEM kernel and even kernel 6 series (both now removed). OEM is the same. Kernel 6 makes the screen scroll endlessly with numbers from 1 to endless as far as I know in format x.xx. Not sure what that's about but it looks like it's complaining about the video kernel driver.

Right now no driver is loaded or even installed for the card. I would expect it to boot with vesa but not doing it. Oddly, Fedora booted up just fine with the new card. 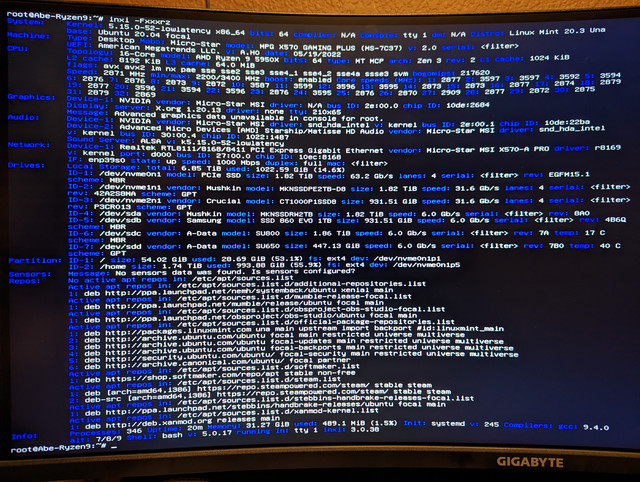 Re: No boot with new GPU - I finally broke it (SOLVED)