Evidence has been found that William Tell and his family were avid bowlers; however, the league's records were destroyed in a fire. Therefore, we'll never know for whom the Tells bowled.
In theory, theory and practice are the same. In practice, they ain't.
Top

MintBean wrote:Moem, sorry to hear a nosey princess got in your face and gave you a black eye.

[edit]I typed a word beginning with b, meaning 'female dog' but it got replaced with 'princess.'

Ah, the type of witch that starts with a B.

GASP!! I've stumbled into a neo-puritanical forum!
Surely the swear filter can't be THAT sensitive?!

A marine biologist developed a race of genetically engineered dolphins that could live forever if they were fed a steady diet of seagulls. One day, his supply of the birds ran out, so he had to go out and trap some more. On the way back, he spied two lions asleep on the road. Afraid to wake them, he gingerly stepped over them. Immediately, he was arrested and charged with transporting gulls across sedate lions for immortal porpoises.
In theory, theory and practice are the same. In practice, they ain't.
Top

A string walks into a bar and the bartender says, "We don't serve your kind around here, so you'll just have to leave." So the string walks out of the bar and sees two young ladies walking down the street and asked one to tie him in a knot and the other to kinda fluff him out a little with her comb. After thanking the ladies the string goes back in, sits down at the bar, and asks for a beer. The bartender says, "Aren't you the same string I just told to leave?" And he replied "No, I'm a frayed knot."
In theory, theory and practice are the same. In practice, they ain't.
Top

I've been practicing for the last year or so to be a magician.

But my wife accidentally revealed all my tricks..


and now I'm disillusioned.....
In theory, theory and practice are the same. In practice, they ain't.
Top

So..... a pirate walks into a bar with a paper towel on his head.

The bartender says "What's that?"

The pirate says..... "Arrrrrrrrrr... thar be a bounty on me head!"
In theory, theory and practice are the same. In practice, they ain't.
Top

Pattie looks at the frog in disbelief and asks his name.

The frog says his name is Kermit Jagger, and it's O.K., he knows
the bank manager. Pattie explains that he will need to secure
the loan with some collateral.

The frog says, "Sure, I've got this" and produces a tiny
porcelain elephant, about half an inch tall, bright pink and
perfectly formed.

Very confused, Pattie says she will have to consult with the
bank manager and disappears into a back office. She finds the
manager and says, "There's a frog out there called Kermit Jagger
who claims to know you and wants to borrow $30,000. He wants to
use this as collateral." She holds up the tiny pink elephant.
"I mean, what in the world is this?"

The bank manager looked back at her and said,
"It's a Knick-knack, Pattie Whack, give the frog a loan,
His old man's a Rolling Stone."
In theory, theory and practice are the same. In practice, they ain't.
Top

There was a sailor who purchased a beautiful cat-rigged boat in
the classic mode, a heavy canvas mainsail laced to the boom and
with rings which slid up the mast. He found a mooring spot in a
classic small boats harbor, and enjoyed his craft each weekend.
One year when he launched his boat and returned for his first
full weekend aboard, he was faced with a catastrophic situation.
A pair of catbirds had decided that his main would be a perfect
place to raise a family. They had, therefore, constructed a nest
on it, and left tokens of their appreciation for his hospitality
spread liberally within the confines of a certain line defined in
the water.

Recovering quickly from the catatonic state temporarily induced
by his discovery, he catapulted the already laid eggs into the
water and checked into the category of bird repellents. Over the
course of the next few weeks he tried statues of owls and cats,
reflecting streamers, plastic whirligigs, and many devices
ordered from various catalogs. Nothing worked.

One weekend as he rowed out to his pride and joy he noticed an
old salt climbing aboard a boat similar to his. The man was
obviously also starting his weekend, and his boat was spotless.
Striking up an acquaintance, he told the man of his problems and
asked his advice. "All you need to do is buy some baker's yeast,
and rub it all over your sail before you leave on Sunday," he
was told. Desperate, and willing to try anything by now, he
questioned not and did as he was told.

The next weekend his boat, too, was once again spotless and free
of the pesky birds. The next time he saw the old salt he thanked
him profusely, but could now resist asking the reason for the
effectiveness of the remedy. "Very simple," came the reply, "you
just have to remember that 'Yeast is yeast, and nest is nest,
and ne'er the main shall tweet.'"
In theory, theory and practice are the same. In practice, they ain't.
Top 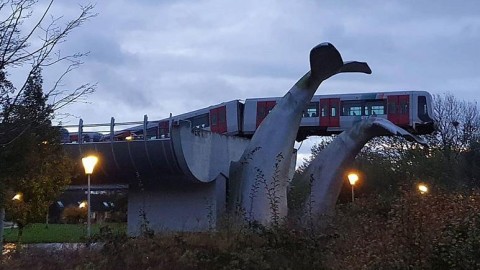 "Your train has arrived at the cetacean."
In theory, theory and practice are the same. In practice, they ain't.
Top

The conception of this thread is a myth to me.

(slipstick, I just realized you revived this thread from four years ago. Holy necropost. You obviously mythed the point of it.

The pilot overheard the couple and said, " Folks I'll make you a deal. I'll take the both of you for a ride. If you can stay quiet for the entire
ride and don't say a word I won't charge you a penny! But, if you say one word, it's fifty dollars. "

Bill and Blanche agreed and up they went. The pilot did all kinds of fancy maneuvers, but not a word was heard. He did daredevil tricks over and over again, but still not a word...

When they landed, the pilot turned to Bill and said, " By golly, I did everything I could to get you to yell out, but you didn't. I'm impressed! "
Bill replied, " Well, to tell you the truth I almost said something when Blanche fell out, but you know, fifty bucks is fifty bucks! "
"Tune for maximum Smoke and then read the Instructions".
Top
Post Reply
36 posts