My buddy dogs are suddenly looking older, lots of grey, and it worries me.
Top

Yes parting with dogs is one of life's bitter dealings.

We all get there eventually.
Top

Perhaps you are right about worrying, but perhaps you are wrong, because often dogs can live some more years and they are still happy dogs, even if they got gray. (Note, that not all dogs get gray, when the become old, So this visual aspects does not say much. See my previous post on page 1 of this thread.)

The most important aspect is this: Sometimes parting gives an refreshment, in case of dogs it does not. In case of dogs it does always hurt. But this is just the other side of the same medal: Your dog will be on your side, as long as he breathes. The dog will love you, the dog will care about you. Since my last darling died I have a new dog, now about half a year in my home. If I now must cough (normal cough), my dog comes very excited to me and inspects, whether I am well. If you have done something good for humans you have no guarantee, that they will respect this and behave fair. A dog will never forget his or her best friend. A dog does not think about this, this behavior is part of his / her nature. This makes dogs the superior companions.

I wish your dog some more healthy and lucky years.
Top

Hi Cosmo....I'm happy you have a new dog. Is it another Dobie?

murphCID.....I had a hunting buddy, an American Pointer. that started turning grey
at about 11 years old. We hunted birds for another 5 years and he enjoyed every
one of them, as did I.....r
Top

Trouble is, we outlive them! Lost our lab at the start of the year, he was nearly 15. A very good age for a lab. But there is a silver lining... 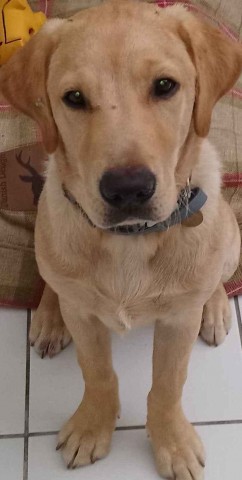 I told the wife that after we lose these two NO MORE DOGS! It hurts me too much to lose them. As since I am getting older (almost 60), I don't want to outlive my buddy dogs.
Top

AndyMH wrote: ↑
Sat Sep 07, 2019 1:05 pm
Trouble is, we outlive them! Lost our lab at the start of the year, he was nearly 15. A very good age for a lab. But there is a silver lining...
Meet Bertie, now seven months old and still busy chewing the furniture.

So true .... Patty a rescue Pit Bull and the sweetest disposition of any dog I ever owned or knew - lost her to cancer ~5 years ago 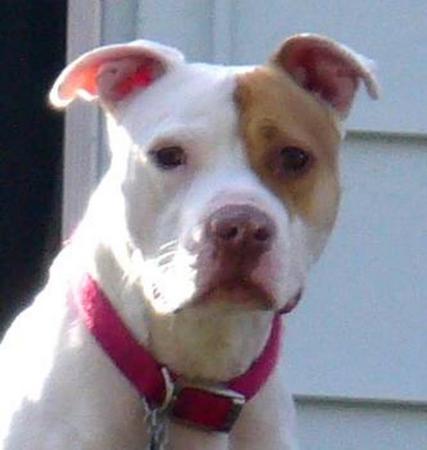 I married into a world of dogs 18 years ago. My wife bred and showed Siberian Huskies for almost 30 years, plus dog sled racing. We had 12-15 dogs for several years. They come and go. I've buried many dogs and watched many come into the world. Both events bring tears, for different reasons.

Now, our days of breeding and competing are over and we have 4 Welsh Corgis, 2 Pembroke and 2 Cardigan. We really love the mellow personalities of the Cardigans, but the Pembrokes keep the goats where they belong (mostly).

We still have one Siberian but he was recently diagnosed with hemangiosarcoma. Thanks to the generosity of a couple of dog world friends, we can afford chemo and he will be with us for another 6-12 months. Bittersweet, but better than just bitter.
Top

We have a Heinz 57 chow/Shepard mix at 7 years

an Akbash at 3 years ( avatar )
https://www.hillspet.com/dog-care/dog-breeds/akbash-dog
This is a FACT!!! ( The Akbash dog’s guarding tendencies can make these dogs prone to “alarm barking,” sometimes to excess.)

poor little guy looked to be about 3 months old? lost his identity almost immediately after we got home.....

he is just now settling down to a staid, comfortable life with the other two.
previous to this week, he was wound up like a clock spring, looking for someone to play with.
Linux Mint 19.3 Cinnamon
Top

We had to bury Son's family dog on the weekend. Another sad day for all.
Fully mint Household
Out of my mind - please leave a message
Top

No. Daisy is a mix between Miniature Pinscher and another, bigger dog.

You ma ask, why not a Dobie again. This is the result of long thoughts I did in the last years (long before Donna went away). I am in the fall of my life. I can, taken from the ages, which my parents and grandparents have reached), expect to live for a number of years, but in my age you can never say, when it is all over or if you have to go to a hospital (even if this is only for a short time). The bigger the dog the more difficult is it to find a place, where the dog can stay. The bigger the dog, the more people have fear and treat him because of this wrong. The dog will be anxious, because she misses me and shows this by reacting wrongly on commands. A big dog might give difficulties to the new masters by using her power and this again produces new problems. With a small dog those problems are not away, but they are also smaller. Besides that: From the color and from other visual details: Daisy appears like a Miniature Dobermann.

Most important: Daisy got after a few weeks very lucky with her new home and demonstrates that several times per day by giving me kisses.
Top

Logical thinking Cosmo. Much like my own thoughts when I lost my last Dobie, Annie.

No matter the breed, all dogs are of the same heart. they give all and expect nothing in return.

The Min Pin will breath new life into you trying to keep up with her play. cheers..rumous
Top

rumpus, I think I know what you want to say, but:
My (late and current) dogs disagree.

At home and outdoor the dogs wants to play. Daisy is nearly crazy to play with a ball or something similar. Donna did not have any interest for balls, but her favorite toy was a little pink pig made out of plastic. She wore it daily with her and was so carefully, that the pig "lived" though all the years. Donna behaved, as if the pig was her baby. Often she placed the pig into my hand and wanted me to stroke the pig. Do you see, why I say, that the dog does want a return?

Those stories could get continued.

Also see this: If your dog would really expect nothing from you, you would most likely put not such sympathy to your dog as you do.

When Donna died, there was a great emptiness inside me. Another dog was the only way to fill this emptiness. Don't get me wrong: Daisy is no replacement for Donna. Nobody can replace her. She is the successor for the room, which Donna left empty behind her. Daisy has one task: She has to be herself, and she does that perfectly. BTW: Donna came to me in the same situation. My dogs did not know anything abut their predecessors and about their duty for me. They are themselves, they learned to love their new master in a short time (in case of Donna it was actually at once) and they communicated with me.

One word to MurphCID:
I understand your thinking and your fear. On the other hand: Mourning about the death of a beloved dog is the other side of the years of happy times with them. And those were happy times not only for the humans, but - most importantly - for the dogs. I would not want to miss that.
Top

Donna did not have any interest for balls, but her favourite toy was a little pink pig made out of plastic.

That was the saddest part when we buried Max (son's dog --- above) His doll that he'd had since he was a pup. It was a knitted doll, and I'm amazed that it lasted all these years. We buried it with him.
Fully mint Household
Out of my mind - please leave a message
Top

Our big Akbash ( Avatar ) loves to see me get the little Piaggo scooter out, and the harness with a long leash.

I ride at about 5-7 mph and she lopes along beside me.
when she needs to set down, she just does, and the leash is spongy and I feel it stretching out. the scooter stops on a dime, I just squeeze the front brake handle and it is stopped.

I've had Dogs all my life...wouldn't want it any other way...the only problem with Dogs is they don't live very long...so sad.

Donna did not have any interest for balls, but her favourite toy was a little pink pig made out of plastic.

That was the saddest part when we buried Max (son's dog --- above) His doll that he'd had since he was a pup. It was a knitted doll, and I'm amazed that it lasted all these years. We buried it with him.

Yes, we always bury their favorite toys with them so they can have them in the doggie afterlife.
Top
Post Reply
38 posts