Yes, yes... 750 MB had my first one too (1994). But SCSI - always funny to figure out the numerical values between 0 - 6 with the PIN plugs. Number 3 was forbidden: because of the CD drive (4 x - read only) ...
Filling the 750 MB was no problem at all. Sellers of external cases, hard disks and the unspeakable SCSI cables found a grateful buyer in me.


I did not have my own computer back then, but I did use those machines when I was 18 working as a beginner programmer. I could visually inspect the whole HDD (sector by sector) in less than a day. And I was wishing the machines had math co-processors (which you would have to buy as expensive hardware add-on).
If you're looking for a greener Linux pasture, you won't find any that is greener than Linux Mint. ;)
Top

I'm sure COBOL is still being used by many banks...

I've got a friend who is just in his 20's working for a multi-national company and he programs in COBOL.

COBOL and RPG are still alive.
If you're looking for a greener Linux pasture, you won't find any that is greener than Linux Mint. ;)
Top

RollyShed wrote: ↑
Wed Sep 25, 2019 5:43 am
The first computer I worked with was a PDP-8, enter a series of instructions in binary via the front panel switches so it could read a paper tape. Then put the programme in also via paper tape. Output on to paper tape.

When I was studying at tech we had a Data General mini computer (not sure of the model (Nova? Eagle?) but there were dozens of terminals spread around the campus) and in my second year we got to work on a PDP 11. This was 1985-86 I think.
Running Mint 19.3 Cinnamon on an Intel NUC8i5BEH with 16GB RAM and 500GB SSD
Top

COBOL and RPG are still alive.

I quite liked COBOL, the syntax is very English like: ADD AMOUNT TO BALANCE GIVING NEWBALANCE and things like that.

We briefly played with RPG. I sure hope that modern RPG isn't as bad as the version I used, with certain things having to be in certain columns (eg a "*" in column 7 started a comment). Horrible!
Running Mint 19.3 Cinnamon on an Intel NUC8i5BEH with 16GB RAM and 500GB SSD
Top

We had a Data General Nova mini computer in a 19" rack. It was eventually dismantled and the person doing it dropped the hard disk on the floor. This was a 19" rack HDD, fixed head, with at least 5 MB storage. OK, it might have been 10MB. We imitated mock shock and tears at such a disaster. The bowl from inside it went to the mechanical section to be made into a BBQ bowl.
Top

I recently visited the National Museum of Computing in the UK and they had a large room filled with old disk and tape drives. They had one platter from a drive that measured over 1 metre in diameter (see photo below). The tag on it says it's from 1965 and had a capacity of 4MB per side. 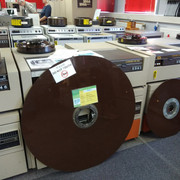 The smaller disk packs that are sitting on top of the drives resemble the type that we used at the company I first worked for (1980's). I once obtained one that was being thrown out because it had a head crash that destroyed one of the platters (and the head too of course). The platter was worn right down to the bare metal beneath the magnetic coating.
Running Mint 19.3 Cinnamon on an Intel NUC8i5BEH with 16GB RAM and 500GB SSD
Top

I think I lied earlier in the thread, my first computer was a Dragon 32. I think my brother still has it and it still works!

COBOL is still being used, if you're very very good at it you can make 6 fiigures.
Top

I've not used it since the 70's. My sister did train later in it, but she hated the job so much, she got her teacher's license in Texas instead and does that.
All things go better with Mint. Mint julep, mint jelly, mint gum, candy mints, pillow mints, peppermint, chocolate mints, spearmint,....
Top

Ah yes, the Dragon! The National Museum of Computing had one of those too: 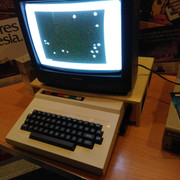 You had a hard drive?

Back when I started we only had 360K floppies, I would have killed for a hard disk!

I was writing programs back then that I had to take to work to run because I did not have enough room, they had 20mb HDDs there.
Fully mint Household
Out of my mind - please leave a message
Top

I remember using an Osborne 1.
It was a portable computer which weighed 25 lbs.

and was the size of a suitcase.
The keyboard folded down and doubled as the lid, when not in use, with a built-in carrying handle. The screen was 5 inches, with two 5.25 floppy-disc drives (90 K per disc). It had a whopping 64 Kb of RAM. I used to play text-based adventure games on it. At the time, I thought it was the greatest thing ever.
Top

and was the size of a suitcase.
The keyboard folded down and doubled as the lid, when not in use, with a built-in carrying handle. The screen was 5 inches, with two 5.25 floppy-disc drives (90 K per disc). It had a whopping 64 Kb of RAM. I used to play text-based adventure games on it. At the time, I thought it was the greatest thing ever.

I saw one of those when I visited the National Museum of Computing. 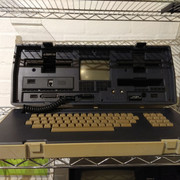 I was considering the Osborne and the equivalent Kaypro. The Osborne IIRC, came shipped with CP/M and was quite attractive, except that, by the time I started looking seriously, DOS looked like the way of the future. Gee! I'm glad that I did.

came shipped with CP/M and was quite attractive, except that, by the time I started looking seriously, DOS looked like the way of the future

Well, *I* remember when Photoshop was installed from a handful of floppies...

...and punch cards and 'fridge-size disk and tape drives, etc, but the PS thing seems more significant.
Please edit your original post title to include [SOLVED] if/when it is solved!
Your data and OS are backed up....right?
Top

I started with ICL (UK computer manufacturer) in 1968, and my first mainframe had 16,384 24-bit words, and no disks. You got 4 tape drives, 0.5 inch tapes. The beast had real magnetic core memory, needed 3-phase power and air-con, and you walked about inside it because the peripherals went right round the walls. It weighed something over a ton. Only had an assembler (PLAN - Programming Language Nineteen-Hundred series) but the company built a COBOL compiler about 18 months later. I never heard of GHz -- our processor was clocked at 160,000 cycles/second. It didn't even have hardware to multiply integers -- that was a kernel "extracode" entered through an interrupt.
In fact the fastest part of development was the London double-decker bus I had to take from my office to Putney Bridge House, to use my half-hour allocated time slot every few days.
We eventually got disks -- 30MB with 11 platters, looking like a cake stand in a posh tea-room. Before that, ICL experimented with a drum store and a magnetic card store. I'd like to say they never really took off, but they did -- the installation pack included bags of concrete to fasten the things to the floor.
We learned how to do an awful lot of data processing with minimal resources, and how to not ever waste a compile or test slot with dumb mistakes.
I pre-ordered my ZX80 (1979?) before they were released, and built mine on the kitchen table, hand-soldering every pin on every component. Added the 16kb external memory, and used an audio tape recorder for data and program store.
Top

The first place where I worked as a programmer had a large air-conditioned room where all the computers were kept. There was a false floor that could be pulled up and all the cabling was under this floor. Usually only the computer operators (that was their official job title) were allowed in the room, but I befriended them and eventually got the lock combination to the room so I could go in and load up tapes on the tape drives that I needed for my work. I remember being told that if an alarm went off while I was in the room then I had 20 seconds to get out before the room filled with a gas that would put out any fires. The gas would do a great job of putting out the fire but was poisonous and would kill anyone in the room, so getting out quick was imperative!
Running Mint 19.3 Cinnamon on an Intel NUC8i5BEH with 16GB RAM and 500GB SSD
Top
Post Reply
54 posts