I found this back in a corner.
Think it is time to take a peek, see if anything important is still on it, and send it to HDD heaven.

It isn't even big enough to install 19.3 Cinnamon on it

wonder if the warranty is still valid

A 4200 rpm ata hard disk disk drives are sloooowwww. It could be a good paper weight.

or use it for target practice

or use it for target practice

Now there is a very good idea.

My son is taking me out to his Target Range next Saturday....
I'm going to take that with me.

My Ruger LC9s at 25 yards, ought to be just the thing.

it was only a few weeks back, that I've disposed of some of those very HDDs,
& an couple that double that size ( 40Gb )

back then, I'd be very happy, to Dual_Boot with those Double_Sized HDDs.

but, times have changed, and now I've got so much HDD real_estate .. that I'd not know what do with it all.
- fill them up with Photo's from my DSLR 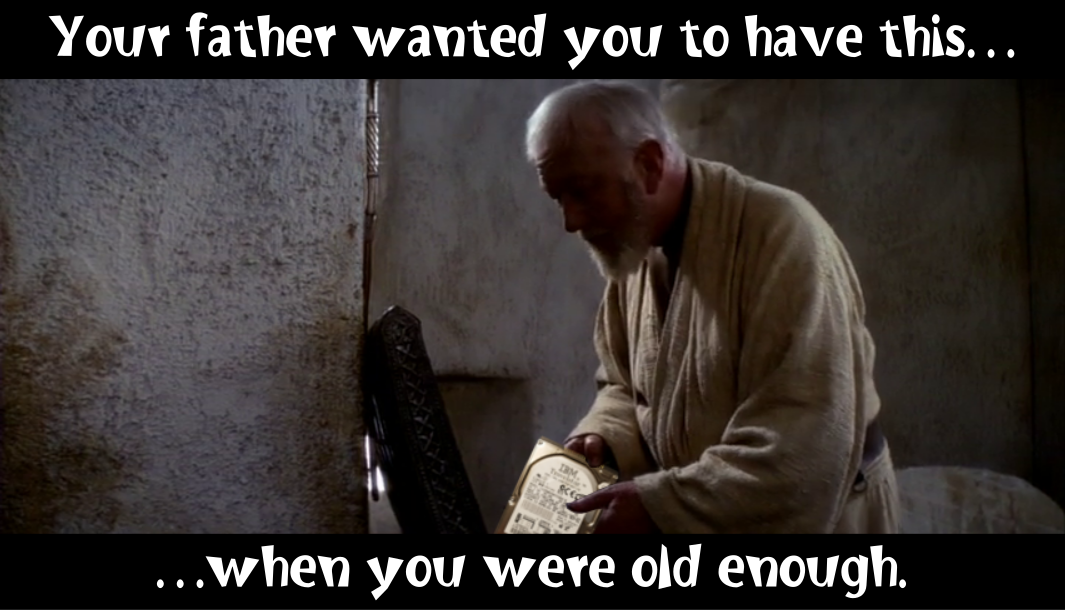 Thanks Portreve made me LOL!

I took apart one of those hard drives to see what was inside but what really impressed me was how solid the construction was. The top cover is a pretty thick gauge stainless steel. Would like to hear how it fared at the range.
Top

I'm so glad to hear I could spread a little happiness and mirth.

I actually owned (at least one) IBM Travelstar, but it was Apple-branded because Apple often used them as OEM parts. The Apple logo signified it had a slightly modified firmware which let it be used with Apple's own hard drive utility program. Their program wouldn't let you use it with any non-Apple-supplied drive. Eventually this changed, but it took until somewhere around I think System 7.5 or 8 for that to happen.

This has really taken me for a trip down memory lane. And, with your and everyone else's permission and gracious indulgence, let me bring you along with me for a bit.

The first two models of "Macintosh" to be released, the 128 and 512 (named, for those of you not in the know, for the amount of RAM they had socketed on the motherboard) did not have a SCSI interface. Instead, they had a dedicated serial (not parallel) bus to which could be attached a serial interfaced hard drive. The very expensive Macintosh XL and Lisa both had SCSI. Eventually in 1986, Apple introduced SCSI as a standard interface on all Macintoshes, where it would remain until the release of the Blue-and-White PowerMacintosh G3 towers (and also the iMacs).

Now, SCSI (Small Computer System Interface) is an IEEE standard, and it has a set of rules for how it works and is supposed to be used. Those rules are:

All devices on a SCSI bus are numbered 0-6, with 7 reserved for the exclusive use of the SCSI controller. The bus is to be terminated at both ends, beginning with the first device, and ending at the last device. The internal connector was self-terminating, so if you only had an internal hard drive, it was not necessary to connect an external terminator. There were two basic types of terminator: a pass-through, which is what you would use on the first external device between the computer and the device, and an end-cap terminator which would be used on the last device. In common practice, people had hard drives, tape drives, cartridge drives (like the SyQuest 44, 88, etc.), and scanners connected via the SCSI port. Generally (though not always) the external devices had two Centronix 50 pin connectors on them, and this let you daisy-chain devices together in one long, physical bus.

SCSI devices could often be fickle beasts, with some refusing to work unless they were the first, or alternatively the last, device connected. Also, some Macs had their own peculiarities. For example, some hated terminators. Others refused to boot with anything external attached, so you had to turn the computer on and then quickly plug the daisy chain in afterward (which, per SCSI specs, is a definite no-no since it is live and not hot-pluggable), and others required specialized terminators. Some devices needed specific terminators.

However, apart from those sorts of factors, once connected correctly, it worked incredibly well and very reliably, and was significantly faster that parallel or serial.

Here are the many different kinds of SCSI terminators,

Here are a variety of different SCSI cables.

This is a SCSI hard drive mechanism. Note the absence of pins to designate Master/Slave as found on IDE hard drives: 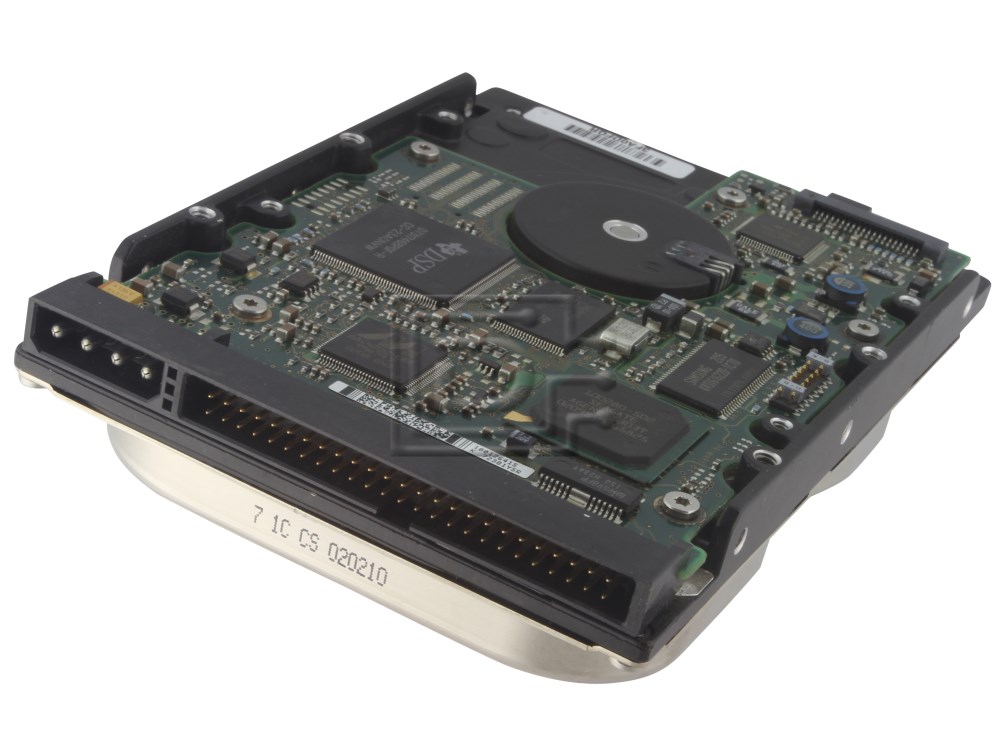 This is a typical SCSI enclosure. Note the two-button SCSI ID Number selector next to the power button:

What are all these little things you are playing with? Years back we had one of our lot dismantling a computer, a 19" rack system. He dropped the hard disk and we all cried (behind our laughter) to try and make him feel bad about it. The HD was a 5 MB fixed head drive. The bowl was removed and sent down to the engineering section to turn into a BBQ. Yes, that was about the size of it. Back in the days of REAL computers.

Now back to filing the files off my 3-1/2" floppy disks. No, I'm not joking, two boxes with 70 in each plus another smaller box. A lot of correspondence and travel stories dating back to pre 1996. The drive is a USB one and just about everything is readable with what Mint has available. DTPs are a bit of a pain though.
Top

Thanks for that trip down memory lane, the Apple IIe was on my short list way back when I first got into computers, I couldn't justify the expense of the Mac when they came along though I could see the value.
Fully mint Household
Out of my mind - please leave a message
Top

lsemmens wrote: ↑
Mon Jun 01, 2020 10:04 pm
Thanks for that trip down memory lane, the Apple IIe was on my short list way back when I first got into computers, I couldn't justify the expense of the Mac when they came along though I could see the value.

I had a clone Apple IIe, half the price. I did a lot of club newsletters and a guide book on it. Back in the days when cut & paste was with scissors. With one or even better two 5-1/4" floppy disks you could actually do something useful.

How could such a small disk as 5-1/4" be better than the 8" ones we had on the bigger PDP-8? Well they certainly were way better and could be tweaked if they got out of alignment. And then came the minute 3-1/2", you're joking - aren't you? No, not joking, they were good.
Top

Yeah! My first machine had two 5 1/4" floppy drives of 360kb each! With 256kb of RAM running that new OS called DOS, I was in heaven!!!!:D
Fully mint Household
Out of my mind - please leave a message
Top

For the kids reading this who might not note the implications of the above, I've just received by email 54 PDFs I've got to mount on a club website. One of those disks might just about hold 3 of the PDFs. Arrh yes, good old DOS.
Top

I can go back further

I've got you beat. Yesterday, I removed a 20MB hard drive from my Amiga 600 and replaced it with an IDE to CF adaptor and a 4GB CF card.

And 20GB hard drives aren't useless. If you're into old school PC Gaming, that drive could play a very useful part in a Windows 98 rig (top tip: early XP hardware runs like lightning with Windows 98 and you can even get it online after a fashion with Puppy Linux on a live disc - it can't do YouTube or Instagram but it can certainly visit older sites and forums and download any files it needs).
Top

I cut my teeth on dBaseII, a cp/m machine was also on my shortlist. In the end I moved to Clipper. I was writing programs on my machine and taking them to work to compile them because they were too big for my box. In the end work supplied me with a laptop running DOS 6.1.
Fully mint Household
Out of my mind - please leave a message
Top

lsemmens wrote: ↑
Tue Jun 02, 2020 9:17 pm
I cut my teeth on dBaseII, a cp/m machine was also on my shortlist. In the end I moved to Clipper. I was writing programs on my machine and taking them to work to compile them because they were too big for my box. In the end work supplied me with a laptop running DOS 6.1.

I loved DOS 6.1 and groused around like a spoiled child when Windows GUI was released....