by Pepi
Never looked back on my change from KDE to Cinnamon.

Err - what's your source for those numbers? Judging by the official mint tracker's scrape stats for torrent downloads of the isos I think the user numbers are a significant under-estimate.

E.g the current 64bit Cinnamon 19 iso v2 has been downloaded 116792 times - and that's only via the official torrent - not direct downloads. Sure not every download equals a user, but there is definitely more than 6000...

by tdockery97
Since the advent of LMDE 3 Cindy I have reversed my preferences to Cinnamon. LMDE 3 is so stable and reliable that I just can't pull myself away from it now. I've tried going back to KDE and it lasted a day before I restored my Clonezilla image of LMDE 3.

Same here but the opposite. I love KDE, everything else I've used seems amateurish.

by Reaccion Raul
I'm really loving Cinnamon, i installed it on early September and i really enjoy it. I like it minimal feeling, and overall distribution of menus etc is great. The UI is really great and effects look great. So easy, you can keep focus on your tasks without getting crazy in between. The only thing Cinnamon lacks Its a real proper theme, Cinnamon theme (Mint-Y, just a revamped Arc) is nowhere close to Breeze, which is truly amazing, best defaults on Linux world by far. Cinnamon with Adapta looks amazing too though.. but the defaults are not impressive, they just work. I think the next step for Mint 21 or 22 should be create a real theme. If they nail it you will see Linux Mint 1st again in no time.

by JayKay3OOO
Used KDE on an off for years, really like it, but it always crashes - at least some part of it.

Still think it's cool, but I use the standard cinnamon with mint. Never had any issues with it. Just works.

by DantesPop
I think there are lot of good opinions here. I have just started using KDE, before that I had been using cinnamon and gnome but those are both really buggy with my new laptop which has the GTX 1060. I have tried each driver version from 390-410, 410 seems the most stable so far. I like KDE so far even though the menu does take some getting used to. I have not had any crash/freezes since moving to 410 for the GTX driver whereas cinnamon and gnome had a lot of issue working correctly with my monitor. If I were only using it on my laptop display I would have stayed with cinnamon, but I have the Samsung CHG90 monitor and the others were having a really hard time with it recognizing the monitor correctly on each boot or connection. So far KDE seems good.

by Destry
I am running LM 19 KDE and it works well for me.

by CaptainKirksChair
My first install of any type of Linux was just the default download of Ubuntu. Not bad, but it wasn't "just right." I then tried the default install of Zorin 9. It was okay but uninspiring. Coming directly from Windows I can see that my expectations were somewhat Windows tarnished. Not fair I know, but being human we all do that.

My first install of Mint was version 17.3 Cinnamon. The recommendation was that Cinnamon is a great way to transition from Windows to Linux. And since the Cinnamon DE is the flagship of Mint, I figured that's the best place to start. So I wiped the hard drive and installed Mint 17.3 Cinnamon. Damn! It was quick, responsive, well laid out, configurable (like Windows had never been), and quite easy on the eyes. The laptop I used was a Dell E6400 Latitude with 4GB of RAM and a 320GB hard drive. I never really cared about the RAM usage; all I cared about was could *I* use it. And I did. I still have that laptop with Mint 18.3 Cinnamon installed.

At the beginning, I tried Mint 17.3 KDE on my home built AMD desktop (A6400K APU, 8GB RAM, 1TB hard drive partitioned). The boot of the LiveUSB always went fine and the usage was good. No issues. But when I installed Mint 17.3 KDE, the boot always froze at "The World." I tried all of the GRUB boot time fixes -- nothing. So it was Cinnamon for me. It now has Mint 18.3 Cinnamon / Windows 10 dual boot.

I have found that Cinnamon just works. Maybe it's my hardware. I am typing this on my daily driver; iMac 9.1, 8GB RAM, 320GB hard drive, with Mint 19.0 Cinnamon installed. This is my desktop. I took that photo just down the street from my house. 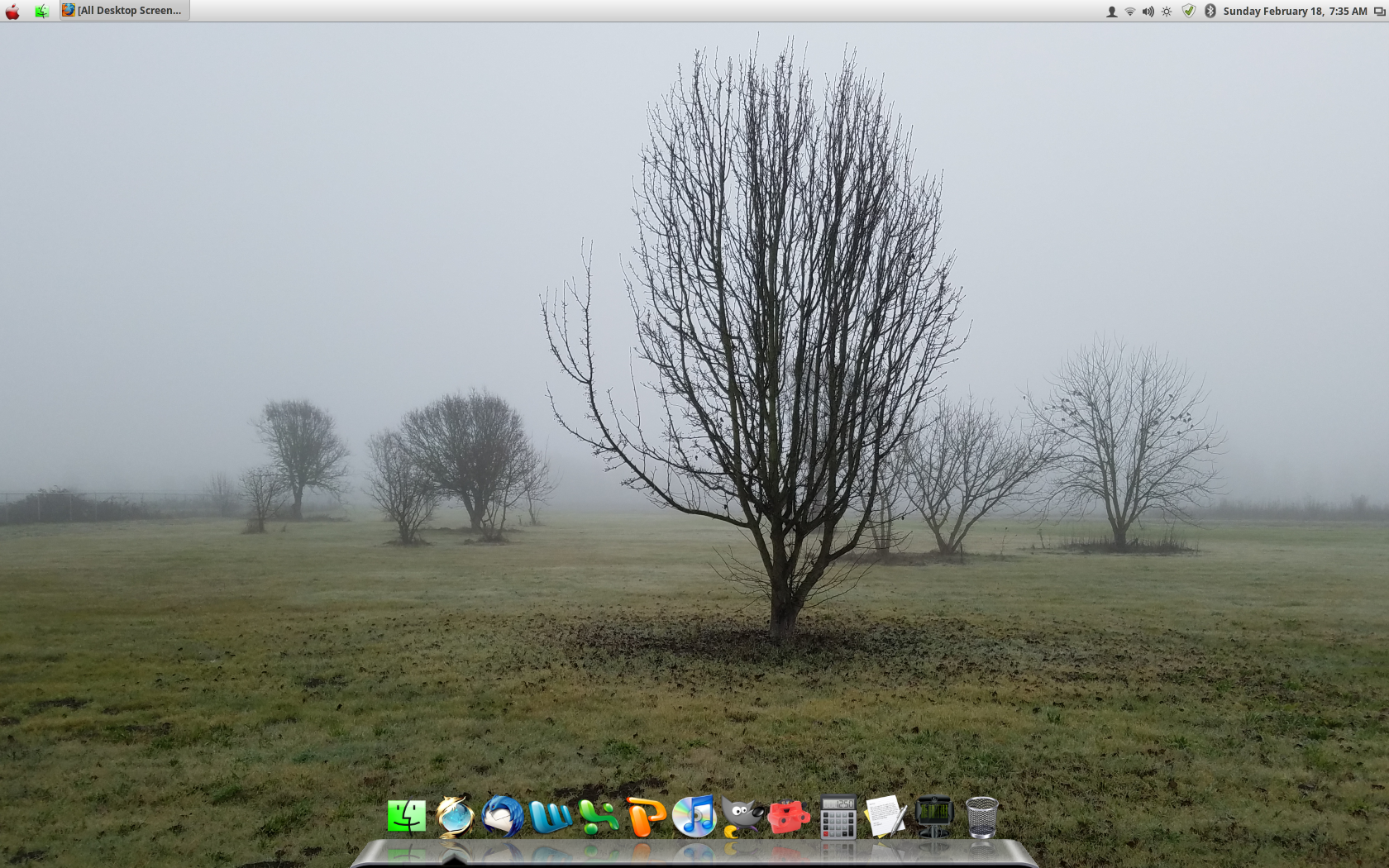 If I had to choose a KDE version, it would be the one that came as a default with Mint 17.3 (I still have the ISO and a LiveUSB). That version was beautiful. I installed it on this iMac as a test before I installed Cinnamon. A default install of KDE really makes a Macintosh, well...nice! I'll be the first to admit that. But I use Cinnamon because I'm comfortable with it. Because I've configured it the way I like. Because it's easy.

Technical specs, RAM usage, all of that? Who cares. That's way too deep. Is it usable? That's what counts. Cinnamon -- it's the Mint flagship for a reason.

by Portreve
Gnome 1.x and 2.x were always very Classic Mac OS-like. In fact, I'd say if we were going to compare Gnome to Apple's and Microsoft's respective desktop environments, my opinion is 1.x and 2.x were probably something like 70% Mac OS-like and 30% Win95/98-like. It's possible those percentages might actually skew even further towards Mac OS's Finder, but at this point it's just kind of splitting hairs.

Because projects like Cinnamon, XFCE, and MATE basically all derive from the Gnome 2.x paradigm, it's fair to say they're all essentially 70-80%+ Mac OS and Mac OS X-like.

In my view, Mac OS / Mac OS X's Finder user interface paradigm has always been more intuitive and efficient than what Microsoft has put out, much of which is basically a cheap knock-off of what Apple did. Yes, it's true that both Apple and Microsoft are Xerox PARC licensees, but Apple was first and Steve Jobs' focus was on the execution of a user interface, and not just the technology beneath it. Given copyrights and such, Microsoft could only get "close" without legally stepping over the line with out-and-out charges of duplication. (That said, there was a lawsuit between Apple and Microsoft which Apple should by all rights have won, but was the victim of a legal system not yet staffed by judges and counsel who were users of technology, much less tech savvy.) Microsoft, to be fair, did put forth some interesting ideas, such as the taskbar, quick-launch area, and even the Start Menu.

Power On Software's Action GoMac gave us Classic Mac OS users a task bar and start menu which then in a way finished rounding out the user interface.

To me, back when I was just playing around with different distros of GNU+Linux, Gnome 2.x always felt like the logical successor to what Apple was doing.

Conversely, though without question it's a zillion times more powerful and liberating than any user interface or desktop environment Microsoft has ever shipped with any version of Windows, KDE to me has always felt much more Windows-like. It's always felt like a kludge and honestly I've never really liked how it's handled file management tasks (which is something I feel a desktop environment lives or dies on) and, as has been mentioned up-thread, it's always been a system resource hog.

In terms of the intuitiveness and efficiency-related comments above, those are in the main highly subjective judgments. On that basis I would claim it's fair to say the community at large has spoken, and that's why you see either Gnome 3.x or Cinnamon as the primary desktop environment of choice on most GNU+Linux distributions and not KDE.

I would also hasten to add one of the several primary benefits of the GNU+Linux ecosystem is the existence — often very much in your face — of legitimate and credible choices, desktop environments among them, which simply do not exist on any other non-libre platform. So, even though I don't like KDE, the fact that it can and does exist (and thrive) pleases me more than I can say.
All times are UTC-04:00
Page 2 of 2