According to this article (https://tinyurl.com/y3kzxqw5) Microsoft will be releasing Chromium based Edge for Linux in October. Anyone who's used Edge in Windows, what's your opinion and is it worth trying versus Chromium, Brave or Firefox?
Top

If Microsoft will release it in the same way as Google does with Chrome, i.e. a .deb file and its own repo for updating, then I'll certainly try it. Not if it's a mere Flatpak and/or Snap.

Having an extra web browser or two, never hurt anyone.

fstjohn wrote: ↑
Tue Sep 22, 2020 3:18 pm
Anyone who's used Edge in Windows, what's your opinion and is it worth trying versus Chromium, Brave or Firefox?

I've used Edge on Windows at work, and it does the job. But, I'm more used to using Firefox. Since we already have Chromium I don't see any need for Edge on Linux.
Top

This advertisement from Microsoft in 2000 came to my mind. Translated it means that an open operating system has not only advantages ... 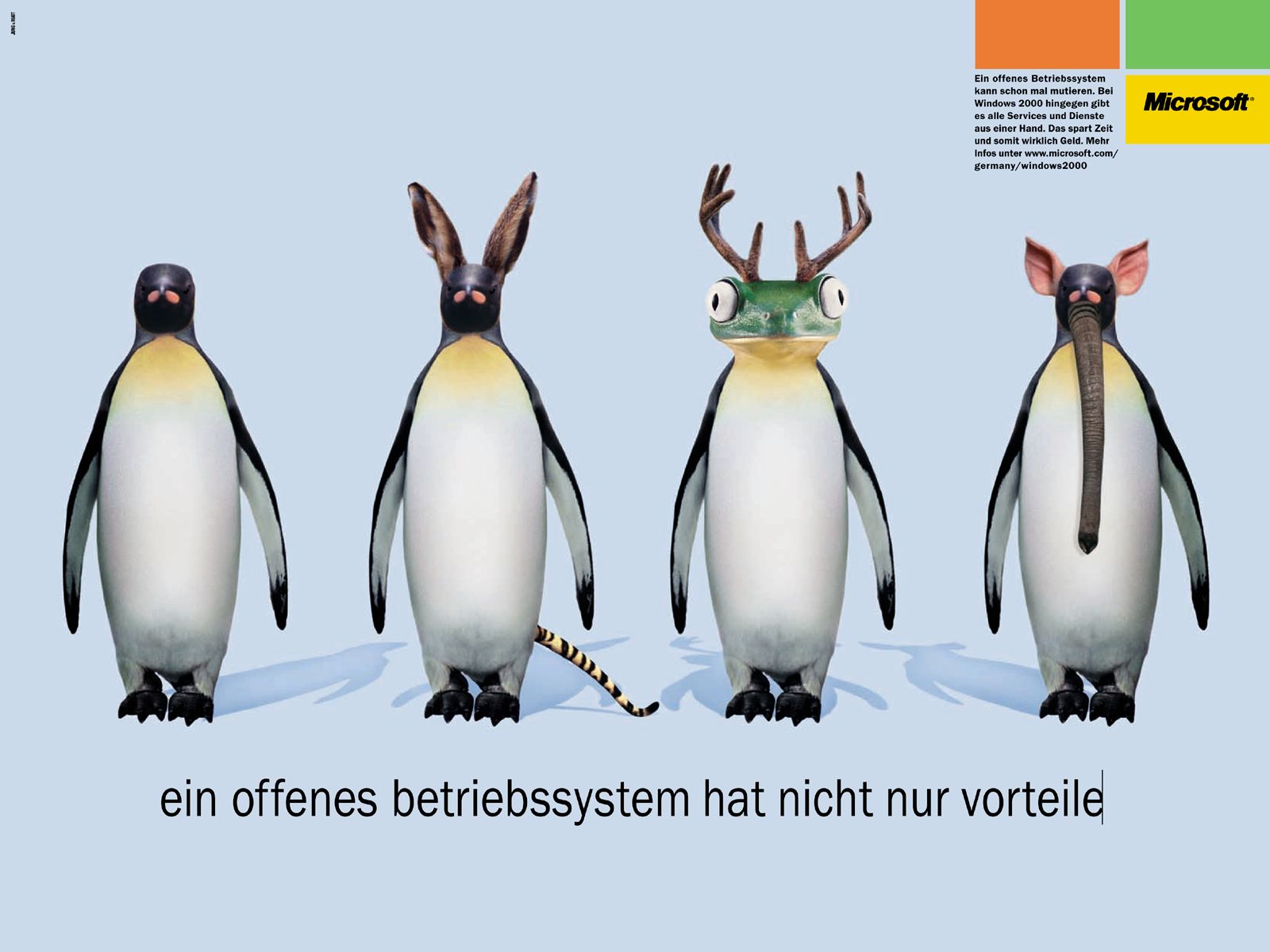 fstjohn wrote: ↑
Tue Sep 22, 2020 3:18 pm
According to this article (https://tinyurl.com/y3kzxqw5) Microsoft will be releasing Chromium based Edge for Linux in October. Anyone who's used Edge in Windows, what's your opinion and is it worth trying versus Chromium, Brave or Firefox?

It's better than Firefox but half way between Chromium and Chrome. The main issue I have with Edge relate to the very restrictive options for the new tab page and how third-party search options interact with it. If you use a different search engine, the search box with massive Microsoft logo above it remains in the middle of the page but your search typing is immediately transferred to the address bar. In any other chromium based browser this doesn't happen. The logo is either removed or replaced with a search engine appropriate one and the box still works properly. The new tab page also triggers a bing service worker thread.

The majority of enhancements brought from the original Edge to the new Chromium based one are being contributed by MS at code level on github to chromium itself. Not the proprietary garbage specific to Windows, but smooth scroll, better memory management and greater power efficiency.

The Freedom To Choose Your Own Avatar Without Victimisation.
Top

--After the sheer disrespect microsoft ( notice how I refuse to capitalize that word) has done to so many over the decades, to the best of my ability I refuse to use anything if at all possible they made and/or were directly involved in creating . Especially since they've been data mining their users since xp first launch fall of 2001. Do any of you find it ironic and coincidental timing that was the same time that bush jr and john ashcroft launched what I call the UN patriot act? NO..It's no coincidence. It's a legal loophole that microsoft has been exploiting ever since. That will be the extent of my political connections unless done in either PM's or another domain/site out of respect for not trying to bring politics into this domain. I mention it because it IS important.

History is very important. It is vital to always research and know history of something..intentions, companies, people, reasons why they do the things they choose to do. microsoft's has not yet show me enough that E.E.E. isn't still apart of their...culture or end goals. History has proven to all of us that they cannot be trusted. An update that turned off your camera, an update that literally cause data loss, and update that has caused vague bsod loops are all the results of satya nadella choosing to push away their only os qc team ( Jerry Barnacules can personally account for this) back in 2015, and instead he uses the very people his company data mines to be the beta testers.

These examples speak volumes of enough reasoning behind why so many have left Windows and joined the world of Linux. Linux is about choice....freedom..and just as importantly..( this is obviously applicable to U.S.A citizens but the over message should be applicable to all innocent people in the world)..one's 4th amendment rights. Linux users never need to worry about a stupid product key, or limited re-installs be it the same system or when it's time for an upgrade and in the end they still only install it into the same one PC ( yes retail copies allow this but 200 bucks just to half-@## own your PC? Get real), but it is an ecosystem FOR the people ...BY the people.

Do you find it pleasantly ironic that these days it can be argued that there are equal or possibly more Linux vulnerabilities coming out just as often as those in Windows and yet the Linux communities are ALL over the problems like white on rice or black on chocolate and FIX those problem often long before articles can even be published warning Linux end users about them? Meanwhile Windows users are often lucky if they finally get a real repair patch in the form of a windows update within weeks or even a month or more.

It just proves one simple thing. The PEOPLE know what is best for them. They know better. They've proven this across the decades that Linux has slowly and steadily grown. LINUX...runs the internet and the world wide web ( 1st is hardware..2nd is software btw if you want to get technical). For me....in my opinion...if I chose to use Edge within Linux...that would be the same as me choosing to fail my Libertarian ..common sense..core human virtues and vote for a want to be ****. I refuse to do it, and never will. Again..these are MY opinions and core values. I'm not pushing this on anyone else. It's just my way of explaining myself. All things in live eventually connect one way or another. In my opinion, the world of Linux represents the same people-treating core values. It IS a Libertarian's computing way of life. Choice..Freedom..learning...growing..evolving...securing,but not limiting.

Linux is first breath of fresh air I have taken in my life since I learned what a computer really is capable of. The day I turned 40, I was able to ditch windows 100%, come here to Mint 20 Cinnamon, and what a soothing...refreshing and revitalizing taste it has been.

I am grateful to Linus Torvalds, Richard STallman, and anyone else who has truly contributed to the great distros we have today. Of course, this includes all moderators and software devs of the Linux Mint teams. What a truly breath freshening awakening it has been. The food of knowledge of this world tastes so much....cleaner and bolder...unapologetic as it should be but able to prove its worth every time.

Please..never stop learning...never stop critically thinking..never be afraid to question anything or anyone. It is apart of humanity, and it is also a critical core of the Linux world. Gnite everyone. --
Top

it's more about pushing users to their eco-system,
than it is about supporting any Linux ideology . .

on their Desktop .. is not so bad .. but on my SmartPhone .. it lags something shocking . .

i use edge in windows 10 quite regularly and i only hope that it runs as well in linux as it does in windows. it's an excellent browser that easily blows away chrome or chromium or vivaldi or opera!

i don't believe it's supposed to come as a flatpak or snap app and sure hope not.

can't wait for it to come to linux myself.

I can't decide whether this is good or bad. If it forces Google to be even better, then I guess it's welcome competition. But, since Edge's engine is Chromium-based, it may not matter. As a Google Chrome user, I won't be switching (yes, I've tried many other Linux browsers and none work for me as well, especially when it comes to DRM issues). But I'm sure I'll give Edge a look on one of my VMs.

I think this is an attempt by MS to push more people to use Bing instead of Google for searches. You know that a lot of users don't bother to change the defaults, so Bing will get more traffic as more Linux users try Edge. Does any of this mean anything in the long-run? Who can say...
Top

Well I wonder what else will accompany “Edge” to improve your “Browsing Experience”?

I only use Edge on my Windows PC to use the Flight Simulator forum and other Microsoft account-using stuff. It seems to work ok for that. But that's all I'm going to use it for. Firefox is already "fast" enough, and I can easily have different profiles that run separately (yay for -no-remote) so I can keep things compartmented nicer. Not putting Edge on Linux or even anything Chromium.
Top

I've seen numerous Mint systems on IRC that got relatively cooked-up from installing Microsoft tools(IDE stuff) because there was heavy dependency related with Unity, which seems weird, but that's what they did. It was crazy to see some of the package list outputs from those systems. Users saying my system has duplicate and mixed title bar areas on the windows, or boot or login problems since GDM3 was installed within all that mess, -admittedly it was probably fine on straight Ubuntu though, but yea.
Top

No kidding! I trust MS no further than I can spit upwind in a class 5 hurricane.

All that said, I almost died laughing when I first read that there was going to be a Linux version of Edge.
Jeannie

One has to be proactive, not reactive, to ensure the safety of one's data so backup your data! And RAID is NOT a backup!

I can't parse this sentence. Edge is a browser, browsers do not offer operating systems. What are you trying to say?

I took a snapshot of my system and tried this out this morning, it's not without it's rendering issues at present like the favourites menu taking a while to open and if enabled the favourites bar having text corruption but they will iron that out no doubt.

However, it works for the most part as well as the Windows version. That includes Microsoft's implementation of Secure DNS, something neither Chromium or Chrome have enabled for Linux yet. I know Firefox already has similar but in Edge it can use the system's DNS service provider (I use quad 9 which supports secure DNS) and also obey the hosts file rules at the same time.

I know some of you won't care for this but if anyone without an MS aversion wants to check the browser out, you can download it from here.