All Gurus once were Newbies
Forum rules
There are no such things as "stupid" questions. However if you think your question is a bit stupid, then this is the right place for you to post it. Please stick to easy to-the-point questions that you feel people can answer fast. For long and complicated questions prefer the other forums within the support section.
Before you post please read how to get help
Post Reply
10 posts • Page 1 of 1

Hello I have a problem with the repositories list:

W: Some index files failed to download. They have been ignored, or old ones used instead.

I will just wait a little bit...

I have noticed this a few times too. Sounds like the server is down on their end. You can put the address (http://extra.linuxmint.com/) in your web browser as well. Sometimes it works and sometimes it doesn't.
Top

Hello Can I ask, how you installed Linux Mint? I know it sounds funny, but I have just installed Linux Mint, fresh install for the third time this month, but installed it using a VGA cable, not a HD Lead. Now Linux Mint does not recognise HD when you install it with HD the colours on the screen are pink and green, that's because it is using x-server-xorg nouveau display driver. What I have noticed is, that when you install Linux Mint with HD lead, there is a bug with the update manager, which all it does is sometimes work and then the errors start cropping up. So I have just this minute finished installing Linux Mint 17.2 Mate, but through a VGA cable and I have had no errors what so ever. I done the same, installed Linux Mint 17.2 with HDMI cable before and I had nothing but problems, with updates. But fingers crossed and touch wood and whistle, it is fine now. After setting up Nvidia drivers through Driver manager, with VGA lead save a x server file through Nvidia x server settings. Also through Display Settings, which is in preferences, pick the resolution you want. I go for 1024x768. Close down your computer then change lead over to HD, boot up your computer and the settings are exactly the same as your set up through VGA. I hope to God this has sorted it out.

Ah Now I am having problems, with updates again. It seems to be though that when you re boot, it runs ok, or so we are led to be believed. When you hit the refresh button it takes for ever and fails to find these

W: Some index files failed to download. They have been ignored, or old ones used instead.

Cannot fathom this one out, as it has nothing to do with what update mirror you use either.
Top

@clatterfordslim - It has nothing to do with your computer, installation method, chosen mirror or whatever.

The extra.linuxmint.com service is (very unfortunately) not mirrored. This means when that system is down, everyone has these connection issues. Until this service is officially mirrored, everyone will continue to suffer unless people are willing to use an "unofficial" mirror that a user called ralphy set up. (see this thread: http://forums.linuxmint.com/viewtopic.p ... 1#p1059645)

Well have had no problem now, he said with baited breath. Yeah it's just one of those things, when you think about the amount of people in the world or in one mirrored area, all getting their updates, probably at the same time, it's bound to crash sooner or later.
Top

Recommendation for all users: USE A DIFFERENT MIRROR other than packages.linuxmint.com. Seriously.

The issue is going to be addressed in the next release. Clem, Linux Mint Project Leader, was very kind to share some insights in the dev channel.

Currently, when checking mirrors in Software Sources the speed measure does not reflect the potential of each mirror accordingly. You will notice that packages.linuxmint.com is likely to come up at the top in the mirror list while every other mirror speed reports 8, 4, 2, 1, 0kb/s. 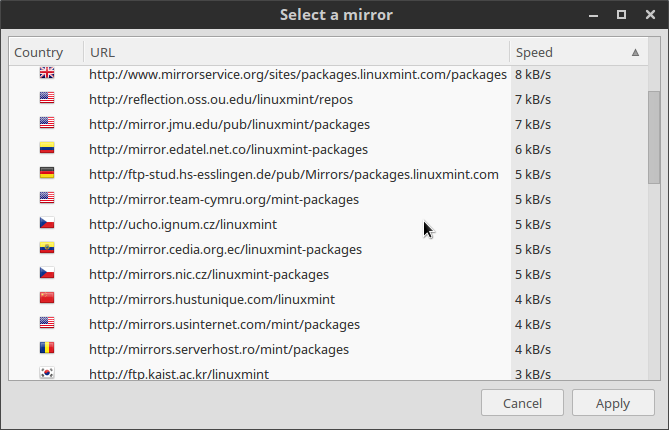 Users follow what logic dictates and that's to select packages.linuxmint.com because it 'yields better speed'. In turn this creates a situation where the master mirrors (packages.linuxmint.com) has to handle 20k/50k connections while every other mirror is barely used or not used at all when they have the speed, capacity and the resources to handle some of the load... and a chain of secondary effects take place as consequence not limited to just servers capacity and availability but network congestion, latency and so on.

Until then (the next release) there is something simple users can do and that's to switch to a different mirror. While the current measurements points to packages.linuxmint.com users are likely to get better speeds and lower latency by using a closer mirror according to their geographic location. Case in point, ignore the current speed measurements and select a mirror other than packages.linuxmint.com. You will be helping to offload some of the enormous traffic master mirrors are handling and almost certainly you will be getting good (if not better) speeds from other mirrors which are mostly unused as of today. Even if you are the in US, please use a mirror other than packages.linuxmint.com; there are many of them.

You can use Unlockforus Mirror if you wish, the mirror is pretty new hence there is almost no load on it. It runs in a BGP Anycast Network, with IP Failover and a teamed balancing per region, distributed as follows:

With the ‘magic’ of Anycast requests are routed to the closest servers (in the user’s route), where there will be 2 servers (per region) waiting to respond and balancing their load. Additionally, they also do IP failover which further reduces the chances of being unable to answer requests if a single server goes down for maintenance or service interruption.
Last edited by ralphy on Wed Sep 30, 2015 11:12 am, edited 2 times in total.
Top

Just switched mine to my country GB not sure why I haven't done this before. Never mind I've done it now

Changed my mirror as well. As you expected, I was using that one because it had the highest speed. I think it was the default one too.

Another thing that would probably help is to change the update frequency. I changed my update manager to check for updates every 12 hours instead of every 30 minutes.
Top

Shryp wrote:Another thing that would probably help is to change the update frequency. I changed my update manager to check for updates every 12 hours instead of every 30 minutes.

It seems this is also going to be addressed in the next release. A less aggressive interval will be implemented.
Top
Post Reply
10 posts • Page 1 of 1