Solved - TimeShift - what does it save?

All Gurus once were Newbies
Forum rules
There are no such things as "stupid" questions. However if you think your question is a bit stupid, then this is the right place for you to post it. Please stick to easy to-the-point questions that you feel people can answer fast. For long and complicated questions prefer the other forums within the support section.
Before you post please read how to get help
Post Reply
15 posts • Page 1 of 1

Solved - TimeShift - what does it save?

I installed some programs in Wine using 4.10 as that has my WiFi card working just fine.

Later, after getting WiFi to work on 4.13, I started using new desktop.

Wine showed all of my Microsoft programs in the menu, but they won't run.
Got errors that "xyz" is missing.

I had to reinstall those programs again in 4.13

How, do you make Timeshift SAVE all of the applications???

does it get even close to do a full Image of the HDD like I can with Macrium Reflect?
Boot up on Macrium Reflect LiveCD and it will make an image of any HDD
Last edited by AZgl1500 on Fri Jan 19, 2018 11:06 am, edited 1 time in total.
Linux Mint 19.3 Cinnamon
Top

For backing up my software, all the installed packages and much more , I use a program called Aptik. You can see from the picture below all the things you can back up with it: 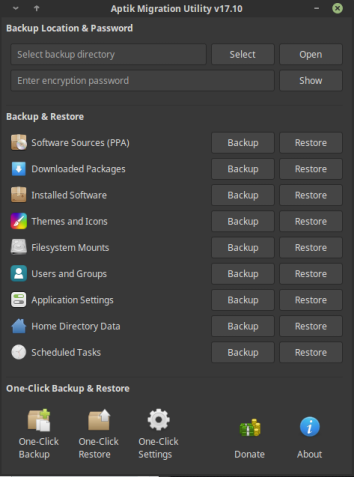 You can even use it to install previously backuped software from one install in a new one
Here is a link for how to install it:

I suppose that's one of the ironies of life, doing the wrong thing at the right moment -C.C.
Top

Preface:
Aptik does not create system snapshots. It save information about configured software repositories and about installed software packages. These lists can be used to install the same software from the same repositories on a newly setup system.

How To Backup And Restore Linux With Timeshift

Preface:
Aptik does not create system snapshots. It save information about configured software repositories and about installed software packages. These lists can be used to install the same software from the same repositories on a newly setup system.

True, but it does backup certain .deb packages installed both through repositories and elsewhere. These don't have to be downloaded again.
I suppose that's one of the ironies of life, doing the wrong thing at the right moment -C.C.
Top

Marziano wrote:True, but it does backup certain .deb packages installed both through repositories and elsewhere. These don't have to be downloaded again.

Saving and restoring of .deb file is of limited use. By the point of restoring them to install again, they may be outdated. So Mint will soon offer to update and download the updated .deb packages anyway.

Without denying that Aptik is a useful application, it simply does not create full and incremental system snapshots. And the question was about Timeshift, which does exactly that, not about Aptik.

Both applications have a different scope.

No, it doesn't. I never implied that in my post.
I suppose that's one of the ironies of life, doing the wrong thing at the right moment -C.C.
Top

I do use Timeshift to make snapshots of my system but after the install I disabled it's default setting for scheduled backups. I thought a manually performed backup on a somewhat regular basis would serve it's purpose for my system. And apparently it was a good choice. I followed this thread a couple of days ago:

This is a quote from the last post of that thread's OP:


Yay, it worked (more or less)! I am now back into my Mint OS, which works just as before. Which proves that the problem was not related to Grub. Rather it was simply that Timeshift, on its default settings, had saved such vast amounts of data in its snapshots that within 48 hours it had filled up the 30GB partition. This had "locked up" Mint and made it impossible to run. There's a warning here for other newcomers to Timeshift. So what exactly did I do to resolve the problem?
.
.
This has been a serious learning experience. I'm sure Timeshift is a good program. But I think it ought to come with a few health warnings (and/or less aggressively-frequent default snapshot settings?).

Maybe a word of caution is in place for the use of Timeshift. At least with it's default settings.
Last edited by Sir Charles on Fri Jan 19, 2018 5:59 am, edited 1 time in total.
I suppose that's one of the ironies of life, doing the wrong thing at the right moment -C.C.
Top

To me, having Timeshift, or any backup program running Automatically defeats the purpose of a "good known solidly working backup". I have 4 Timeshifts right now, and for each one of them, I have a fully detailed document that describes what is in that particlar backup.... Kernel, Programs, problems, etc...

IE, for myWindows Full HDD images I do the following:

D:\Win7 Image Gateway Desktop ( this is the main backup directory )
under that, I create a sub-directory

\20170118 Gateway bkup\
under this new Directory/Folder I always create a text file.
Notes for this backup.text

In that text file I will write up all the pertinent facts of how the system is working at the time of that Image was made. New programs added, programs that were deleted. Anything that might be of critical interest 6 months, or 2 years later when I wonder what is inside this particular image?

On my Win7 Gateway desktop, I got into trouble with it a few months ago. I decided without giving it a lot of thought to just simply re-image the HDD with the last known good image....

Well, Life Happens, my wife got sick, was hospitalized for six months, and passed away... that was a year ago, but the previous 18 months had my life in a terrible turmoil, and I was not maintaining my PC habits faithfully.

When that little miscue happened, ( using an image almost 3 years old ) I found out in a hurry, how much data and programs, and just simple "Preferences" that we all setup in each program.

+1
Creating backups and/or restore points manually and documenting them has always been my strategy.
I keep those files and notes externally
Top

.
Timeshift or System Restore saves you from things like an unbootable system, system file corruption, virus infection, etc by creating snapshots of the system or system restore points for restoration later.

Macrium Reflect Free or Clonezilla saves you from things like hard-drive failure and from the need to reinstall updates and your programs/apps by creating system images or clones of the system for restoration later.
... Timeshift does not really save you from a hard-drive failure.

Live LM USB/DVD or Windows Install DVD/USB saves you from nearly system and/or hard-drive failure but you will then need to install updates and your programs/apps, ... by reinstalling the OS later.
Last edited by michael louwe on Fri Jan 19, 2018 12:02 pm, edited 1 time in total.
Top

I use Timeshift to create a Restore Point...which works but a System Image is so much better for many reasons.
Linux For Ever...Windoze Never

Thanks folks,
that clears it up for me...

I will stick with manual Timeshift scheduling, as the automatic versons would not have documentation to let me know if all was okay at the time it was made.

What I am now doing is this:

A) Timeshift backups (not too bothered because of B)
B)tar cvf /mnt/mdir.tgz . (creates tar of /home/user)

piroska wrote:What I am now doing is this:

A) Timeshift backups (not too bothered because of B)
B)tar cvf /mnt/mdir.tgz . (creates tar of /home/user)

Question? how do I direct it to save that image onto my USB drive?

I stopped it after I noticed that it was making backups of all my previous backups, and also that huge 4 gB ISO file which don't need a backup... so, where is that TAR stored? I need to remove it.
Linux Mint 19.3 Cinnamon
Top

Image?
Timeshift is not an image.
But I tell it to do these direct to my second internal drive.

I did copy them across to my external but I had to take ownership first, it was owned by root.,