All Gurus once were Newbies
Forum rules
There are no such things as "stupid" questions. However if you think your question is a bit stupid, then this is the right place for you to post it. Please stick to easy to-the-point questions that you feel people can answer fast. For long and complicated questions prefer the other forums within the support section.
Before you post please read how to get help
Post Reply
25 posts

hi guys
i cant burn cds with either brasero or k3p the latter gives an error message that mp3 files cant be burned because of missing drivers (still in windows mode there) and brasero will go as far as beginning to record the selection for burning and the program just stops and you just have to quit. I have tried burning one track at a time any it just spits out the blank disk with an unknown error message. All very frustrating as I have converted all my old analogue tapes to both mp3 and wav with audacity but cant burn them to disk can any one advise? thanks
Top

Edit:
brasero is bad
Try "xfburn"
Please edit your original post title to include [SOLVED] if/when it is solved!
Your data and OS are backed up....right?
Top

Timerep, I had encountered your very same problem, when I first started using LinuxMint. A cd/dvd burner is not installed automatically with any new install of LinuxMint. I still think that is a bit weird, but Flemur already gave you the best advice. You can try K3b with addditional software packages or you can choose to install "Xfburn" from software management in LinuxMInt.

I have tried several cd/dvd burners and Xfburn is by far the easiest to use. Very much like an older windows xp burner I used years ago.
Top

thanks guys will give that a try can you suggest one that will copy and burn dvds.
Top

Xfburn does burn dvd´s as well. But it can also produce live iso dvd's for installation purposes. Xfburn has very few buttons, therefore it is incredibley easy in use. But you can NOT copy/rip a copyprotected movie dvd with Xfburn. Use MakeMKV or Brasero (with recommended packages) for that purpose.

K3b has lots more to offer, but as Flemur already mentioned you have to install extra packages by yourself otherwise it wont work well.

Open "synaptic package manager". Search for "K3b". Right click on K3b and in the new submenu select all the recommended packages. Further down below in this thread Phd21 gives a helpful guide on how to install K3b successfully.

Below is a link to some of other dvd burn software for linux and windows.

hi ive just reinstalled k3b and it looked like we were in business until the burning button is pressed then it starts but promptly stops with an error message saying no permission to open the writer drive how do i get over this to make the thing work ?
Top

I must confess that I never used K3b for this very reason you just mentioned: lots of error messages. I have encountered the same error message as well just now. I have installed it just to check out if it worked. It did NOT.

Xfburn is incredibly easy in use.
But it has got a few limitations.

Although "Brasero" gets slammed, it is suited perfectly for everyday users like you and me, who dont want any hassle with installing extra decoders and other anoying stuff that K3b produces.

I have just installed "Brasero" as a test. And it worked flawlessly. It can be found in the standard linuxmint software managment. But it is advised to install it from the Synaptic Package Manager, because to use all of the Brasero options you need to install the recommended packages offered in the Synaptic Package Manager. Just search for "Brasero" in the Synaptic Package Manager. Right click on it and in the submenu select all the recommended packages. Press Apply and Brasero will be installed successfully. Brasero is very very very easy in use, much less complicated than K3b. I would recommend K3b for the more experienced users, who love to have many options.
Last edited by carum carvi on Tue Jul 30, 2019 6:57 am, edited 1 time in total.
Top

ok opend the synaptic and checked made the installation identical to the picture but on the beginning of the write error no permission to open cd device please modify device settings been all through k3b cant change any permissions as such a bit stuck....
Top

timerep wrote: ↑
Sat Oct 20, 2018 1:11 pm
no permission to open cd device please modify device settings been all through k3b cant change any permissions as such a bit stuck....

if it doesn't return "cdrom" in the list, try this:

If "groups" DID return "cdrom", I dunno. Another sort of fix is to set the CD drive's mount params in fstab...
Please edit your original post title to include [SOLVED] if/when it is solved!
Your data and OS are backed up....right?
Top

yes it did return cd rom in groups so Im at a loss here, just have to dump the program and look for something else I guess thanks for all the help much appreciated.
Top

Xfburn is my advice.
Tip: 10 things to do after installing Linux Mint 20 Ulyana
Keep your Linux Mint healthy: Avoid these 10 fatal mistakes
Twitter: twitter.com/easylinuxtips
All in all, horse sense simply makes sense.
Top

Xfburn is indeed the easiest. Thanks to a tip by Pjotr in the past I became a big fan of the user friendliness of Xfburn. But Xfburn is not able to rip / copy a dvd! Copying a DVD, that was timerep's wish.

I have installed K3b myself just to test it, although I have had bad experiences with it in the past with lots of error messages. Now I have screwed up my Vlc mediaplayer, because of the K3b install. Vlc wont function any more at all.

My advice for newbies is to never use K3b. Just use Brasero or Handbrake for copying dvd's.

Below is a link to 5 dvd rippers in Linux.

I have just tried to use them all briefly and I think that handbrake is good for copying dvd's, when there is no copy protection. It has got a user friendly grahpic interface. (Some of the other dvd rippers require terminal commands, which do work fast, but can be a bit dazzling for newbies) Handbrake works out of the box, no need for additional installs.
Acidrip and Dvdrip have a graphical user interface as well, but I think they look quite complicated for beginners. Thoggen in the list below is no longer supported with the link that is supplied.

ok I've tried xf burn and that did an audio CD hooray....I will try hand brake for copying DVDs these are DVDs that i made from old VHS recordings and i wish to hold copies of them. as yet im unsure of a DVD burner I've removed k3b and brasero although brasero is ideal on the face of it with just what I need it goes as far as the burn start and packs up freezes or just doesn't want to play.. Such a shame i love mint over windows but there are some things that just dont seem to work but Im sure one day they will if any one has any other ideas on either getting brasero working or xf burn to burn a dvd or indeed any other program that will work in mint i would love to know but in the mean time thanks for all your help.
Top

The two best Linux CD/DVD applications are "xfburn" and "K3b". In my humble opinion "K3b" is the best one and has many features that the other apps do not have. And, there is nothing wrong with having more than one DVD/CD app installed.

I just burned a music CD using K3b in Linux Mint Cinnamon 19 and it worked perfectly including erasing the CD-RW disc first. But, there are some preparations for K3b to work well in this version which I will get to shortly, from then on it should work well. There are already posts in this forum covering this topic.

Linux Mint 19.x based on Ubuntu 18.04 Bionic is a new version and as usual, some things have changed including security and permissions.

The first thing to do is to make sure the multimedia packages were installed during installation, so go to the "Synaptic Package Manager (SPM)" search for "mint-meta-codecs" and make sure that is installed and if not install it along with "K3b" right-click K3b and install all recommended and suggested packages, "ubuntu-restricted-extras", "udftools" (all of its recommended and suggested packages), "regionset", "lame" (for extra mp3 stuff), "libdvd-pkg".

Add yourself to the cdrom user group and give yourself permissions by running these console terminal commands.

Open a console terminal, type in, or copy & paste, each line below one by one: Click "Select All" above command, right click the highlighted command, select Copy (or Ctrl+Insert), click in the console terminal window, and right click paste (or Shift+Insert or Ctrl+Shift+v), repeat for each command.

Now give yourself permission to use the supporting CD/DVD packages Cinnamon, Mate, KDE, or Xfce users


Restart your computer and K3b should work well from then on.

Burn Blu-ray Disks in Ubuntu, Linux Using K3b
- this will change some of the support packages, so give permissions to "mkisofs"
https://www.debugpoint.com/2018/08/burn ... linux-k3b/

To install this, open a console terminal, type in, or copy & paste, each line below one by one:
Click "Select All" above command, right-click the highlighted command, select Copy (or Ctrl+Insert), click in the console terminal window, and right click paste ("Shift+Insert" or "Ctrl+Shift+v"), repeat for each command. 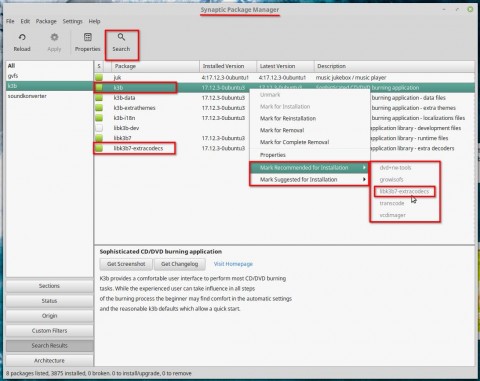 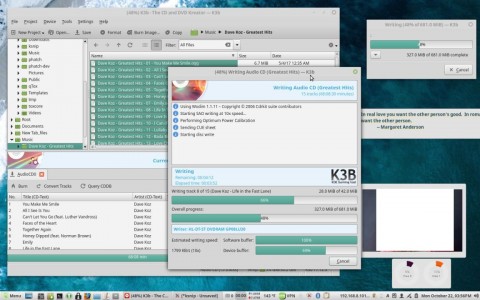 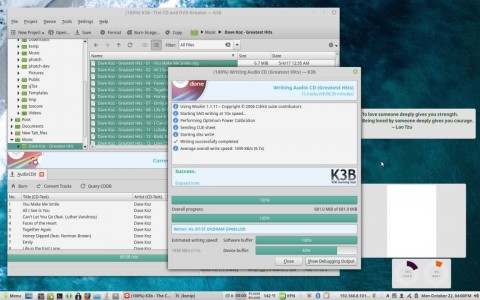 Yep - Pjotr turned me on to Xfburn years ago on his tips web site - it's a winner easy to use - works.
Top

Re: cd burner for mint 19 solved

once again a big thank you to all the guys on the forum k3b now works just burned an audio disk, will try a dvd later on but for now its fine. many thanks once again and good wishes to all from norfolk uk
Top

Re: cd burner for mint 19 solved

You are welcome from all of us that replied...

I was able to burn a music CD, But not a music DVD.
Mel
Top

If you refer to TrueBurner, I use it to this day.
Top

Now I remember the name, I reffered to " CDBurnerXP". A golden oldie from the WindowsXP days, that worked for me better than the Windows7 standard burning software.

But neither of these 2 Windows burners are LinuxMint software and the question of the original poster was to find a good CD/DVD burner program in the software manager from LinuxMint. I hope that all the information in this thread helped you in finding a good Linux burner. If you still have a question ricardogroetaers, you are welcome to start a new thread.
Top
Post Reply
25 posts