ibbill wrote:Or you can right click the panel and choose add to panel find you weather there also. I like the clock one.

The problem is Weather Report is no longer showing up in the "Add to Panel" list.

fruitkiller i needed to reboot to see the changes to mate weather applet and clock applet.

rcentros nice to know you got it fixed! i know the pain of fixing something you cant live without!

ibbill wrote:Or you can right click the panel and choose add to panel find you weather there also. I like the clock one.

The problem is Weather Report is no longer showing up in the "Add to Panel" list.

It turned out to be an issue with uninstalling libmateweather. For some reason -- one thing I've never figured out about Linux -- when you uninstall libmateweather (for example) Linux Mint (and Ubuntu in general, I think) interpret that to mean "uninstall ALL of the Mate Panel." So, even though I had reinstalled the Mate Panel, that didn't automatically reinstall "mate-applets" -- which is where the Weather Report applet is found.
Last edited by rcentros on Sat Sep 24, 2016 4:02 pm, edited 1 time in total.
Top

reddot wrote:rcentros nice to know you got it fixed! i know the pain of fixing something you cant live without!

I really did not realize how much I relied on the Weather Report applet. The world is right again.

trytip wrote:thanx to the mint/mate team for getting the weather working again

Agreed! Whomever of you team members/devs responsible for fixing this, that may just so happen to see this; THANK YOU!! As silly as a little weather-reporting panel addon may seem in the whole scheme of things, it's, well... great to have it back!

trytip wrote:thanx to the mint/mate team for getting the weather working again

The question I asked about was not answered, should I delete the 2 files and put back the .bk (backup) files from that supposed workaround that never worked for me?. Plus, the clock/date applet has a weather tab in the options but it doesn't show at all, hence why I always added the Weather Report applet. Even after the 2 updates in 2 days to libmateweather, I'm not sure if those 2 files were changed with those updates or they remained the same from this guy's workaround. All I get is -- and when hovering over it says Updating... and that's it. I haven't tried some random US city instead of my own Canadian city, maybe it doesn't work that well with outside US countries? I really don't know what is going on. Another of my desktop where I didn't do this workaround which hasn't been upgraded to 17.3, still is 17.2 and the updates worked just fine, after reboot the clock and weather report both work on that old Athlon Phenom II.
Top

You might want to go to Synaptic, right-click on to the two libmateweather files and do a "reinstall." (Don't do an uninstall, that's how I lost my whole panel.) Which version of Linux Mint are you using?

Did you let libgweather update when you had that choice? (I'm just kind of shooting in the dark.)
Top

@fruitkiller
did you update your system?

Yes, I said it 3 times now that I did the libmateweather updates, there was one two days in a row. Don't take it personally, but it's really annoying to be asked something you said multiple times, it's like talking to an ISP's tech support that assumes you are a complete noob.

I think the patches provided by the guy I posted here have to be the problem here, and it's those that were updated, because the 2 files I have kept as .bk files like the user suggested. Like I said, everything works fine on another desktop I have here that's on LM 17.2 mate and the updates were made there too and it worked right away. But that's my old Phenom II i use mainly as a mail server, not this desktop with 17.3 where I guess if I hadn't done the changes suggested by the user I quoted in a previous post, those updates would have worked just fine. What I want to know is if I can just delete them, bring back the original ones that are now .bk files back. But they will be pre-update files and I don't know if that would cause some major issue. I think I will do what the previous guy said and reinstall the files in Synaptic.
Top

fruitkiller wrote: What I want to know is if I can just delete them, bring back the original ones that are now .bk files back. But they will be pre-update files and I don't know if that would cause some major issue. I think I will do what the previous guy said and reinstall the files in Synaptic.

Thanks, I will do this when I feel like doing it. I got some multiple day migraine going on, I didn't take the preventative Relpax when the symptoms started to show up and now I'm paying the price, thankfully I have a large jar full of Fiorinal with Codeine, and that makes it possible to tolerate a screen for 5 minutes at once max hehe. I just have a question left, will putting back the original files that were not updated, cause the system to tell me again about the updates, or just reinstalling them in synaptic is the way to update them when I get to that?
Top

hey fruitkiller it's not like i remember every detailed chat and post on the internet so yes sometimes you will be asked numerous times the same question.

for instance right now i have no clue what you updated or what you copied. does your weather work rightnow?

rcentros got it, it's simple. A workaround made by a user here was made, I even quoted the post, before the 2 updates that appeared in Update Manager twice, there was 2 updates. I said what I said because it's not "all over the internet" it's all in my previous posts. The workaround the user here gave us did not work for me, but thankfully I made backups (like he said to do) of the older files. We've come to think after much unneeded typing that that guy's files were updated, not the previous ones, which have a .bk extension as in backup. What I need to do is delete the 2 libmateweather files from that guy's temporary workaround (that did not work for me), and put back the older files by removing the .bk and then do a reinstall in Synaptic. And that it should work then. It sure did with my other desktop with LM 17.2 where I didn't do any workaround and waited for the official patches, like I should have done on my main desktop.

I'm not going to repeat myself anymore, I'll put this as SOLVED in my case when I actually do the procedure.
Top

Alright, deleting the workaround libmateweather files given here as a workaround (look at page 2 of this thread in case you don't know what I'm talking about, please), and putting back the backup files, removing the .bk from them then I started synaptic and did reinstall on both files. I think only a reboot is needed to see it was fixed, but I got a clue it did, but needs a reboot, because the "--" where the docked applet is says Updating... since yesterday after I did what I just described. Before that with the workaround files provided with a (well-intentioned) user, even after the 2 libmateweather updates we got 2 days in a row (there was 2 fixes one day after the other), those updates didn't work with the workaround files (nor did the workaround work for me). Since I put the originals back, and reinstalled them, the "--" one can hover on never told me "Retrieval failed" or whatever the exact wording was. It's strange to need a reboot in Linux, but hey, it's not the first time, and it never reaches WinXP levels, even the x64 version I loved and used until the end on all my dual or multiple booting machines. It's more like when Win7 x64 Ultimate SP1 before the "turning 7 into Win10 under-the-hood" type of updates (stopped updating win7 after the june 2016 updates), but who am I kidding, it will never reach even that one's occasional reboot obligations, like for every single monthly updates

Uh-oh, it's doing it again for me as of late last night, I rebooted and, the calendar has nothing and the weather applet is infinitely updating again.

i think it's because sometimes the website it's connected to goes down. i did notice my weather went out. i had to change location to something else nearby because the location i was using apparently displaying no more data

It comes and goes for me, but much better. The only reason I need it is that my office room is in the basement and it's the kind of place that used to be a bed room, but the city jackoffs once when I was doing some renovation had to come in to issue me a permit and they said, this place cannot be a bed room, the window is too small in case one needs to escape from a fire.....I guess they never heard of throwing your mattress over the fire in your doorway and then run on it up the stairs, mattresses are made to be fire retardant. Anyway, they said if they came back and saw a bed room there (it was my a guest room) I would get a fine. So when I'm in my office, as I wake up going from my bedroom to the office in the morning, it's so dark already until 7h30 am so I need to know when I'll pull out my winter coat that one morning, unfortunately the garage is not attached.

just a weird OFFTOPIC (but ONtopic with weather) worldview to see some current (almost) of the weather worldwide ... refreshing the page will give you uptodate as they have it of the overALL cloud formation 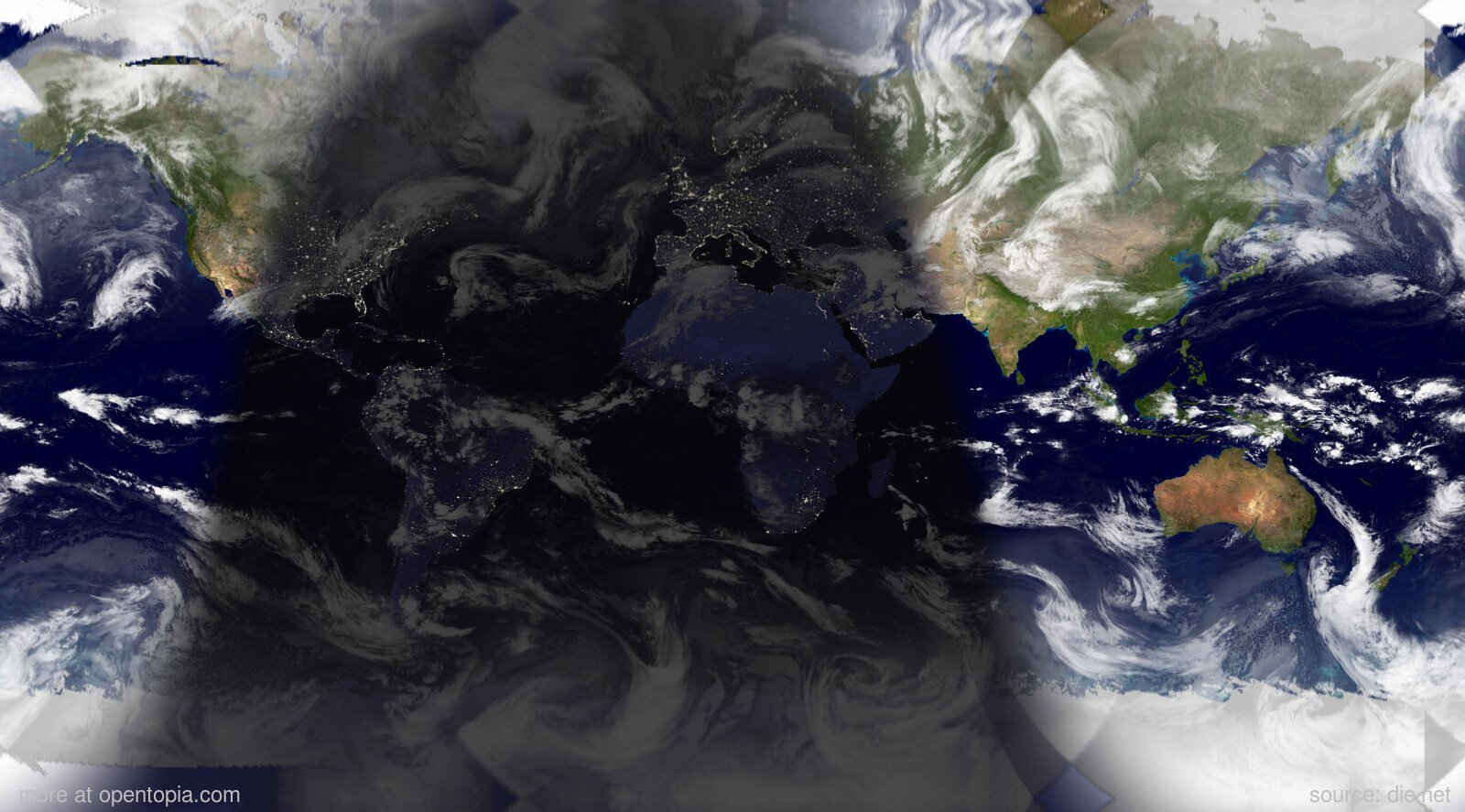 the site i got it from >>> http://www.opentopia.com/sunlightmaprect.html

I'm sorry to bring up this issue again...right now the temperature app seems to work in the date and hour app, the weather report is giving me a "--" since a good while, but then again I haven't rebooted in 711 hours, this desktop acts also as a sftp server and nginx server so I gotta keep it up for the 30-40 people who rely on my data gathering skills...

. So, is this just some update that requires a reboot? I haven't seen a weather app update I'm pretty sure of it, anyway, it's not as annoying when none worked, I wonder why it's working in the calendar app but not in the weather app. Anybody got this going on? (LM 17.3)
Top
Post Reply
125 posts