No doubt heavily greased by corporate lobbyists, as usual.

This is exactly why I am trying to remove myself from the digital world as much as possible. Algorithms are the new law enforcement. They force you to desist without an actual accuser,nor any investigation. You immediately are punished for and must prove innocence. The digital world is a guilty until proven innocent environment. From governments all the way down to the swamp hole known as social media.

The plus side of this new age digital world is that it is shifting to open source. Folks are constantly looking for software alternatives. These closed source monopolies are losing customers. They created an environment in the marketplace, where open source is there only competition. Through contracts and government, closed source has created this issue. They cannot compete with the pricepoint of open source. This goes beyond MS, and includes large companies like Adobe. The free market fails when its not allowed to be free, and this is the result. This EU proposition is like everything else, the free market gets blamed. Closed source is losing money, they need to do something quick to stem the bleeding. This proposition is purely another attempt to hinder open source to secure the closed source monopoly.
Folding@home Project
Team Linux Mint-76140
PM for info on how you can help. Or visit viewtopic.php?f=58&t=243792
Seeking GPU's, i5/7/9's , Ryzens.
Top

This, essentially, means the beginning of the shutting down of the internet for open source, most likely at the behest of the likes of Microsoft and Apple et al.
It's easy to project forward and see how Linux and BSD operating system ISO files will be hit as well once they adjust the algorithms to identify them as "bad" too - think about it.....Microsoft is playing at Linux now, once they get their tentacles into the Linux kernel for a while, they can claim copyright infringement on the code,,,,,bang, gotcha.
Registered Linux user #557695
Mint 17.3 XFCE &Debian 9.1 XFCE dual boot (desktop), Raspbian Jessie (Raspberry Pi)
Windows 10 VM (I know) so I can work from home.
Top

Could someone provide a link to a place with actual information about what's going on/what the proposal is/etc, instead of jumping right to trying to get me to sign something?
Top

Pentarctagon wrote:Could someone provide a link to a place with actual information about what's going on/what the proposal is/etc, instead of jumping right to trying to get me to sign something? 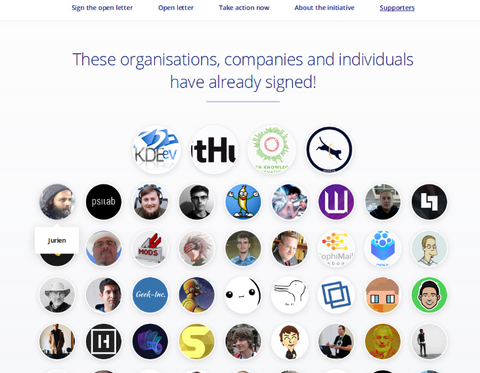 This is entirely ridicules, nothing more then a police state attempt on the internet.
I signed it and passed it on to another forum to have them sign it as well.
What do they plan on doing, taking down or blocking github now?
Freaking nuts.
"Windows: the worst system for the most money, Linux: the best system for free"
Registered Linux User #545430
Manjaro XFCE / Mint Cinnamon
asus X751LX and an acer and a toshiba and another asus
Top

One pretty obvious reason it's difficult to automate searching code is context of content. A thought, however, that I've got is how does a company which might, for argument's sake, bring charges of copyright violation, do so without tipping off basically everyone what their own confidential code is? I mean, all competitors need to do is to know what the code that was removed was, and they'll know that that's the way (either exactly or approximately) that the company who sued on copyright infringement grounds, wrote that bit of their software.

Can you imagine, for example, Nvidia basically tipping its hand on some internal aspects of their driver software?

Besides, writing code isn't the same thing as normal writing. It's not plagiarism to write a bit of code that's identical to someone else's. Sometimes, a particular method is they way something is done, or is the best practices way something is done.
Please remember to mark your fixed problem [SOLVED].

Judge a man by his questions rather than his answers.
— Voltaire
Top

hmmm this might be another software that has a copyright attached to it, it must go

If they can force copyright in code then they will run out of variable, function, class names in a very short time.
All white papers and best practises will become totally useless, all open drivers will no longer become available.
This really sucks for the European countries, because how many sites would just ban all Europe from a website and just not deal with them at all, which sucks.

Should be interesting to see what they deem is copyright and what isn't in code.
We can say it's not plagiarism for code but who says that's what they say and how flawed is their code that searches these things out?
This can become one heck of a mess if allowed.

If they do pass this then let's see their search code to see if they created a code that has a copyright attached to it somewhere else and ban their own search code.
"Windows: the worst system for the most money, Linux: the best system for free"
Registered Linux User #545430
Manjaro XFCE / Mint Cinnamon
asus X751LX and an acer and a toshiba and another asus
Top

The EU is, at heart, anti democratic so they will do whatever suits them, no matter how unjust or ridiculous it seems. Watch as Open source dies a death here over the coming few years