transparent folders on a workspace

transparent folders on a workspace

In KDE Plasma 4 there is a translucent folder available which can be placed on each activtiy screen. This allowed, 1. the background image still being nice visible, 2. to have a collection of activiy specifis folders and file quickly at hand. I example: 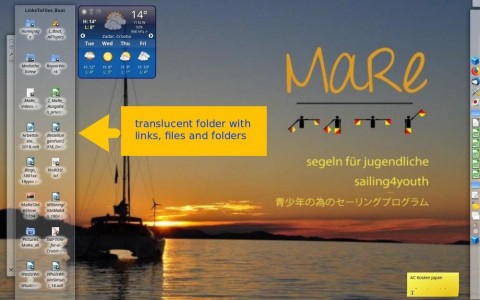 In Cinnamon I searched the desklets but could not find anything similar.

How can such a folder be created on a Cinnamon workspace?

Thanks for helping a Cinnamon newbie!
Top

Re: transparent folders on a workspace

There's nothing directly equivalent for Cinnamon that I'm aware of.

What might be doable is having a vertical hidden panel with a scriptable per workspace set of launchers, but to be honest I think you are better off adjusting your workflow. Something like https://cinnamon-spices.linuxmint.com/applets/view/128 can give you quick access to personalised locations from the panel.

Edit to add - there is https://cinnamon-spices.linuxmint.com/e ... ns/view/47 to give a bespoke set of desktop icons per workspace. Actually scrap that - it only allows to have a different layout of the same icons per workspace.....
For custom Nemo actions, useful scripts for the Cinnamon desktop, and Cinnamox themes visit my Github pages.
Top

Re: transparent folders on a workspace

Also thanks for that. Sounds promising. I will deal with it later and get back.
Top
Post Reply
3 posts • Page 1 of 1