Questions about Grub, UEFI,the liveCD and the installer
Forum rules
Before you post please read how to get help
Post Reply
15 posts • Page 1 of 1

First, I am not good with computers, but somehow I learned about Linux a few years ago and have been using it ever since. Now my Mint 17 Qiana is passed it's support date and I'de like to upgrade to Mint 19.1. If possible I would like to be able to save my present “Desktop”.

To give you an idea of how little I know about computers, I found something amongst my stuff with “1GB” on it, and had to look at the Internet to find out that it is a USB stick. I also have one that says “8GB” on it, but it is a fraction of the size of the 1GB stick.

Now, I have been looking at the Internet for awhile trying to figure out how to upgrade from 17 to 19.1, and usually get stopped dead by terminology or abbreviations, as this stuff is written by and for people who know a lot more about computers than I do.

Also, will my 8GB stick be enough, or should I get something bigger? Please don't forget that I would like to be able to keep, or at least reinstall my Desktop.

If this inquiry should have been sent someplace else, please let me know.

As always, Forum responders, thank you for your help,

The easiest and most headache free for you would be a clean install of 19.1
Back up your files to external drive! (Pictures, documents, music, etc.) Whatever you don't want to loose.
See https://blog.linuxmint.com/?p=3669 for system requirements.
8 GB USB stick is plenty for the install ISO.
Installing the ISO on a USB stick will wipe everything else on it.
See https://linuxmint-installation-guide.re ... stall.html
As for your Desktop Settings Mint 17 I don't think you'll be able to save them. Many changes have been made, there would be a lot of compatibility issues.
Mint 19.1 will give you brand new desktop.
If you need further help start a new post on Installation & Boot viewforum.php?f=46
Be specific as possible in your subject line! It will get more views, possibly faster replies.
If your query has been resolved, edit your first post and add [SOLVED] to the subject line.
If you found a solution on your own please post it.
A generation which ignores history has no past and no future.
Top

Do I have this right? You bought a used Optiplex on which the dealer installed Mate 19.1 (saga here) and now you want to upgrade your old system (not identified) which still runs LM17. There is no upgrade path and no way of which I'm aware to transfer your desktop. It's going to be a fresh install (per the Installation Guide, linked by farkas) which you set up just as you did with the Optiplex. Of course, it's easy to transfer your data files.

Don't understand your other question. Is the 8 GB drive large enough for what? Yes, it's big enough to burn a live ISO from which to install to the computer's hard drive. If you're asking whether it's big enough to hold a standalone full install system, the answer is no.
Time flies like an arrow. Fruit flies like a banana.
If your problem has been solved, please edit the thread title.
Top

To farkas, thank you; I will be reviewing every word later today and will post back.

To pbear, I am now trying to upgrade my old laptop, and had no idea that you would remember me from an old post. My laptop is an old Acer, Aspire 4730Z, Model No. JAL90, MFG Date 0811. Sadly, my memory is worthless. I got pretty much all my problems solved on my Optiplex (on which I am typing right now), but that was mostly the work of the man who installed Mate 19.1.

I simply want to learn more, and try to do this one myself.

I'm out of time for now, but will be back later.

Here's what I'd do. Set up both computers side by side, or some other arrangement where you can easily reach both. Open the Installation Guide on the Optiplex for handy reference. Also open a word processor or text editor so you can take notes. Take very detailed notes. So detailed you could do it again without the Installation Guide. Now, work through it, the same as you would if your were building a chicken coop from plans or replacing the water pump on your car. The words only can do so much. You have to be looking at the thing to figure out what the words mean.

This isn't rocket surgery.* A large part of your problem, it seems to me, is that you've psyched yourself out. The easy solution, of course, would to pay the guy who set up the Optiplex to reinstall the Acer. You want to do this yourself. Okay, then quit whining and just do it.

* What would be rocket surgery is trying to upgrade. See this thread by karlchen. The moral of that story, as far as I'm concerned, is "never mind."

Hope that helps. Good luck.
Time flies like an arrow. Fruit flies like a banana.
If your problem has been solved, please edit the thread title.
Top

I concur. A clean install is always best. Upgrading is never ideal and upgrading that far is bound to just make a mess.
Top

With the advice of "farkas" and "pbear", I have made an attempt which is described below....

I as I write this, it is around 8:00 PM my time (EST), and I have been working on this most of the day. I tell you this so that you won’t think I’m lazy and just whining.

With and without this 8GB USB stick inserted into my laptop (“Aspire” described above), I have tried several times to do whatever I am supposed to do to load and try Linux Mate 19.1 on my laptop. I think that the closest I have come to success was when I pressed “F2” as soon as the screen showed an opening. (There was also an opportunity to press “F12” which I did on another attempt, but eventually any thing that I have done gets the same final result). The next screen I got was titled, “InsydeH2O setup Utility”, and I moved the highlight at the top of the screen to “Boot”. On that page is a list of choices, the first being “USB HDD : SanDisk Cruser Edge.

When I click F10 for “Save & Exit”, I get a blue sign saying, “Exit saving changes”, with “Yes – No” choices. I click “Yes” and get, “No DEFAULT or UI configuration directive found! Boot:” with a blinking “underline” after it. I sincerely tried to find out what should go after the blinking underline with no luck.

After screwing around with this most of the day, I tried Googling, “No DEFAULT or UI configuration directive found!” and reading the various forums and blogs (or whatever they’re called) with no help. Either I didn’t understand them at all, or whatever they told me to try didn’t work.

Can you offer any help. I have tried to describe my efforts to give you the best understanding of what I’ve done, NOT to whine.

Did you you make a bootable image on the USB using USB Image Writer which is in Accessories?
Read https://linuxmint-installation-guide.re ... en/latest/
Last edited by farkas on Tue Apr 30, 2019 9:16 pm, edited 1 time in total.
If your query has been resolved, edit your first post and add [SOLVED] to the subject line.
If you found a solution on your own please post it.
A generation which ignores history has no past and no future.
Top

What you want to do, BoDill, is copy the ISO and other files onto the OptiPlex. Easiest way would be to boot it, insert the USB and copy over. The OptiPlex is also the most convenient place to verify the download. Then, as farkas says, still using the Optiplex, burn (not copy) the ISO to the USB drive using USB Image Writer, an app you will find on the Menu under Accessories.
Time flies like an arrow. Fruit flies like a banana.
If your problem has been solved, please edit the thread title.
Top

Before I try the procedures recommended in the last two posts (one by farkas, one by pbear) I am seriously considering taking all the old stuff off of the hard drive. I went to the the Linux forum and entered, "format hard drive", and got 2907 responses. I assume that this is not the ideal place to ask this question, but can you recommend a site, or some source of instructions, to help me do this before I try to load the new version of Linux? Or perhaps there is a way get rid of the old stuff after the new version of Linux is successfully installed?

I apologize for asking this question in this forum, but you seem to already know how limited my skills are, and it does have to do with this installation.

BoDill, you don't have to do anything at all to remove the old stuff, using the default option during the install will take care of that for you. The step-by-step installation guide is at https://linuxmint-installation-guide.re ... en/latest/. Don't hesitate to ask for more help here if needed.

Agreed. BoDill, when you look at the Installation Guide, you'll see a series of screenshots, so you know what to expect.
The most important step is this one, where you select installation method: 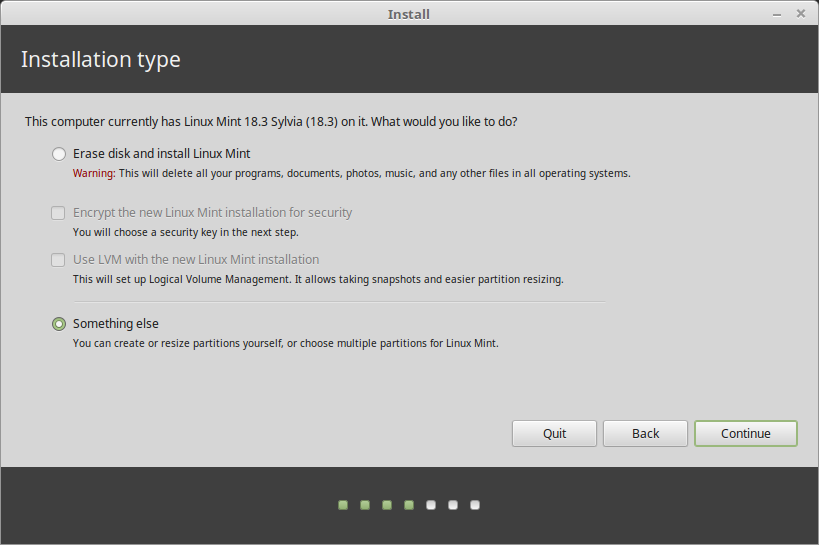 Notice "Erase disk and Install Linux Mint." That's the one you want. As Larry says, that will take care of erasing all the old data on the drive.
Time flies like an arrow. Fruit flies like a banana.
If your problem has been solved, please edit the thread title.
Top

After exhausting all previous information and suggestions (and sincere thanks to all), I went to visit the only local "computer guy" that I trust, (and who can work on individual's computers; my old source is now solely corporate) and told him of my plight. Since he knows me, he immediately informed me that my old computer is a "32 Bit", and won't take the new 64 bit Linux 19.1. He already had 19.1 in a disc (or something, from his last venture with my tabletop computer) so he loaded it for me onto a Dell laptop, which I picked up and just now plugged in.

With a little fooling around with passwords, etc. etc. I believe that I now have a functioning laptop with only Linux 19.1.

In the future, if I have to contact the forum about something, I think I should put all the "particulars" that I can find about the computer, etc. in the initial post. I feel very bad for wasting so much of your time and effort due to my lack of knowledge. The possible benefit, however, is that these posts may help someone else with a similar problem.

As usual, thank you all very much for your help, and especially your patience,
BoDill

Glad you were able to get it taken care of. Feel free to come back and ask questions whenever you need help.

Agreed, glad you were able to get it taken care of. Happy Minting!
Time flies like an arrow. Fruit flies like a banana.
If your problem has been solved, please edit the thread title.
Top
Post Reply
15 posts • Page 1 of 1