[SOLVED] How do Themes work.

All Gurus once were Newbies
Forum rules
There are no such things as "stupid" questions. However if you think your question is a bit stupid, then this is the right place for you to post it. Please stick to easy to-the-point questions that you feel people can answer fast. For long and complicated questions prefer the other forums within the support section.
Before you post please read how to get help
Post Reply
4 posts • Page 1 of 1

[SOLVED] How do Themes work.

I have tried installing several themes from the list but no mater what I install, nothing changes???? What havent I done?
Last edited by jimisbell on Tue Nov 26, 2019 11:04 am, edited 1 time in total.
Democracy is two wolves and a sheep discussing what's for dinner. Freedom is a well armed sheep contesting the decision.
Top

Re: How do Themes work.

So I know you are using Cinnamon from your previous post, but it's good practise to mention with Desktop environment and Mint version you are using when you make a new support topic. The answer to this type of question will differ depending on the Desktop Environment.

So for Cinnamon the Themes settings module has three sections - Themes which is for applying installed themes, Add/Remove for adding/removing additional themes from spices and the Settings section (Cinnamon 4.2 and later) which has various theme related tweaks.

This is the main themes GUI. You click on the thumbnail of the currently active theme to select an alternative in each section.

Generally changes are instantaneous. A few applications may need to be restarted after changing the Controls theme. A Cinnamon restart (Ctrl-Alt-Esc) is normally needed for changes in Mouse Pointer to properly take. 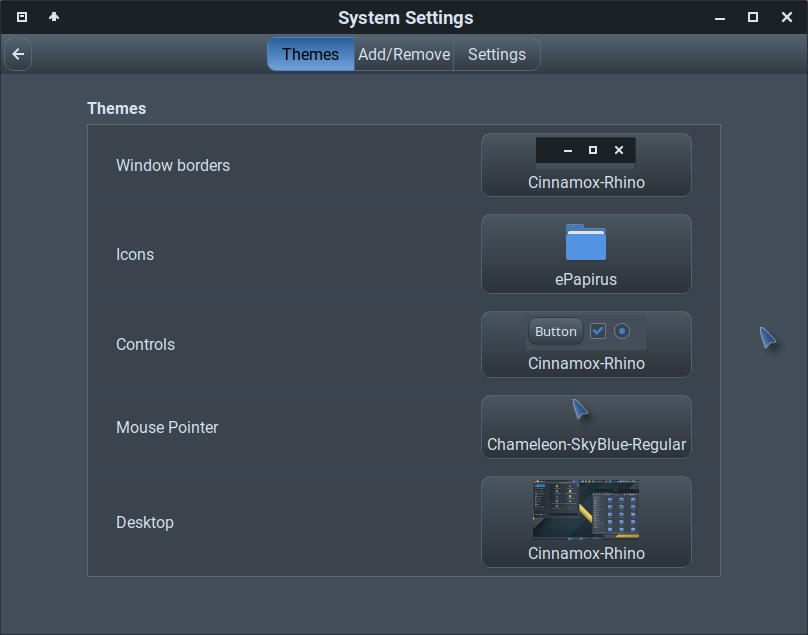 The majority of themes you can add from the Add/Remove section are the Desktop theme only. But a significant minority include a full themes package with Window Borders and Controls as-well as the Desktop theme.
For custom Nemo actions, useful scripts for the Cinnamon desktop, and Cinnamox themes visit my Github pages.
Top

Re: [SOLVED} How do Themes work.

That explains it. I was expecting more than I should. Now I see how it works, what I saw was reasonable.
Democracy is two wolves and a sheep discussing what's for dinner. Freedom is a well armed sheep contesting the decision.
Top

Re: [SOLVED] How do Themes work.

Thanks for your explanation, and specifically for the example. I was going crazy trying to get rid of the pink-everything...
Top
Post Reply
4 posts • Page 1 of 1