Be interested in what Linux users consider to be their favourite email client. Having come from Windows 10 using Outlook 2019 that I do like extremely well, I like the look of Evolution as it seems to have similar interfaces to Outlook. I like to create filters, so that mail from certain sources go to a custom folder, also like the idea that folders can be customised by colouring. https://wiki.gnome.org/Apps/Evolution. I do not like Thunderbird as I don't like the interface.
Running Linux Mint MATE on 2 desktops + Linux Mint Xfce on Netbook + Cinnamon VM on 3rd Desktop
Top

I like Thunderbird just fine. I used to use Eudora, then Seamonkey Mail, so I felt right at home.
A friend of mine prefers Claws, as it is similar to what she used before when she was on Windows.

I've been playing with Rambox and Hiri. I have to have Exchange for work. For my personal emails I use Protonmail and Criptext web based for now until they come out with clients.
Linux Mint 19.3
Lenovo Legion 17.3 Laptop
Intel© 6 Core™ i7-9750H CPU @ 2.60GHz
64GB
Nvidia RTX 2080 MAXQ
Top

Thunderbird was so satisfactory when I first adopted Linux that I have never looked at any alternatives. I create my own filters to divert incoming mail to the appropriate folders, and the built in Junk system soon learnt what was really junk and what was not. I never felt the need for coloured folders as I prefer all text to be black on white.
Cliff Coggin
Top

Well i don't about others but i use Thunderbird.
I never used any E-Mail client before except on mobile, ya i agree interface of Thunderbird is quiet complicated atleast for first timers like me but it works good.

Well if your question is answerd then please edit your original post and add [SOLVED] at the begining.
Top

I recently installed Mint and, since I already was a Thunderbird user, I just stuck to what I knew and liked.
Avatar by photojenni on Trend Hype.com
Top

Yup. I couldn't do without it. It works well in Thunderbird.

When I first used Linux, for about a year, I used Ubuntu and Evolution. That was probably in 2009, and before I learned to update regularly and often. But I remembered Evolution and how well I liked it, from that experience.
It seemed to me that Thunderbird, when I was using it with Linux Mint Cinnamon 17.3, kept having issues with it's own extensions and wouldn't always allow them to work. I like having an email checker so that I don't have to keep opening up the email program to see what mail I have. Thunderbird...has that...but...it doesn't always work.
When I last upgraded to Linux Mint Cinnamon 18.3, I switched to Evolution as well, and now my email checker always works, no issues. So, in my opinion, if you want an email program that you use, and not have to fiddle with constantly, switch to one that works. In my case, it was Evolution.
Other people's experiences may vary.

I came to Linux from an Acorn RiscPC using RISC OS 4.2 in 2006 and found, to my delight, that the program I was using in the OS - Messenger, had a Linux equivalent named Gemini and have never settled on another. Eventually the programmer of Messenger/Gemini commercialised it as MessengerPro and I gladly paid the price and never regretted it. I have dabbled with Thunderbird, Evolution, Claws Mail and Google mail but they never satisfied me.
tenfoot
"Light thinks it travels faster than anything but it is wrong. No matter how fast light travels, it finds darkness always got there first, and is waiting for it." Terry Pratchett (Reaper Man)
Top

Thank all of you for your input and think I will give Evolution a try. Regarding installing it, is it best via Terminal command or download it and do that way? I only asked as I have found doing via Terminal seems to achieve the best results but it has always been via advice I have seen here. TIA.

I'd not do it in either of those ways... I'd just use the Software Manager.

Another vote for Thunderbird here.
Fully mint Household
Out of my mind - please leave a message
Top

I’ve only ever used Thunderbird in LM. I may give Evolution a try, though.
Top

I also prefer the look of Evolution but found it a bit buggy. Also, in the package manager there is only an outdated version and there does not seem to be an easy way to install the current version (or does anyone know?). So I do use both Evolution and Thunderbird. To keep my work account separate I use Claws for that. Also working well. Claws uses more ram than Thunderbird and Evolution if you use many accounts.
Top

Well have run into a problem immediately over setting up my email account. Can anyone help me with this message shown here? 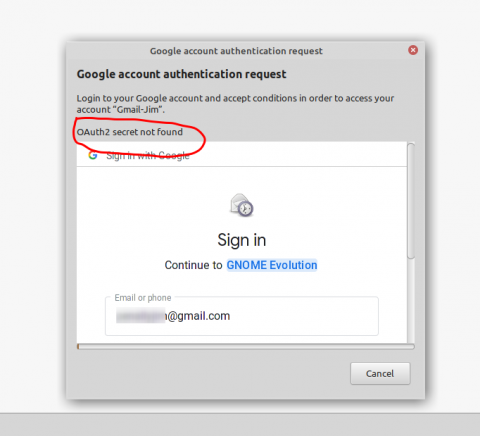 When I click on Gnome Evolution it just gives me the name of the developer.
Running Linux Mint MATE on 2 desktops + Linux Mint Xfce on Netbook + Cinnamon VM on 3rd Desktop
Top

ccase01 wrote: ↑
Sun Dec 15, 2019 2:22 pm
There is also Rambox. You can pretty much setup everything in there including exchange accounts.

Don't have exchange clients and that is why am not interested in email clients that do. I do not want to complicate things.
Running Linux Mint MATE on 2 desktops + Linux Mint Xfce on Netbook + Cinnamon VM on 3rd Desktop
Top

I am running with Thunderbird at the moment but would like some advice about it. First of all how to I set up a default text message format in the body of the message? Also, can I add a picture to the signature I have created. TIA for helpful answers.
Running Linux Mint MATE on 2 desktops + Linux Mint Xfce on Netbook + Cinnamon VM on 3rd Desktop
Top

Thunderbird. With the Lightning calendar plugin. I have my main email provider and a Gmail account. I don't bring Gmail emails into T-bird, just my main account. I'll check Gmail via Firefox, every once in a while.
I feel more like I do than I did when I got here.
Toshiba A135-S2386, Intel T2080, ATI Radeon® Xpress 200M Chipset, 2GB RAM, 500GB
Top
Post Reply
20 posts • Page 1 of 1