Endeavour is actually good from it's functions, just like Arch but "The GUI Way"

151tom wrote: ↑
Mon Jul 27, 2020 2:19 pm
I may have to throw a spare parts desktop together and give Endeavor OS a try and see what it's like as I do like Arch base distros just to impatient to learn Arch.

LOL, I definitely can relate to that


It is Arch but with a nice and easy installer, if one can say so. I did not try it but I tried its predecessor Antergos. It was a good experience but I am not in the Arch camp.
Top

For me, at present, both Mint and Manjaro KDE share the top spot. Both have their advantages and drawbacks of course:
Now I've cleared a bit of space, I'll try out a few others & see what they are like, so I can add those here.

.... and for the lazy. Mint just works and is overall so easy. I happen to be extremely lazy, so for me, Mint rules.

After 14 years of full-time use of desktop Linux, I simply want everything to work reliably, with the least amount of effort. I haven't found the same optimum of ease and reliable stability anywhere else.
Tip: 10 things to do after installing Linux Mint 20.1 Ulyssa
Keep your Linux Mint healthy: Avoid these 10 fatal mistakes
Twitter: twitter.com/easylinuxtips
All in all, horse sense simply makes sense.
Top

This does make things a lot easier for those new to Linux, so a good thing. Also, as much as I like Manjaro, I wouldn't recommend it to a novice. It's definitely a bit more "involved" than Mint is.

Having an "easy" system to work with also helps the helpers to help those needing help ... did I say "help" too many times in one sentence ...

Isn't there also a LTS Kernels for Arch Linux? Don't know for Manjaro though. But, consider trying EndeavourOS. They really keep it simple both for lightweightness and for its newbie beginners as well. But, Manjaro is still a good for me. Especially they have my fave Cinnamon polished!

Barbados99 wrote: ↑
Fri Jul 24, 2020 11:00 pm
Anyone had experience with EndeavorOS? I am tempted to try it this week. It's supposed to be another Arch based distro, but easier to work with than Arch.

Just reporting back on the EndeavourOS experience. It really is a nice distro but night-and-day different from Mint. I had an extra partition and added it to boot on my machine rather than a VM. So I have a triple boot setup now with Mint XFCE, Mint LMDE4 and Endeavour. So one Ubuntu derivative, one Debian derivative, and one Arch derivative. I'm just going to spend time getting to know EndeavorOS better. One thing that I liked right away about it. You have so much control over setting it up to what you really want. LOL, I thought it would boot after the live installation into XFCE. But all it had was a blinking command line cursor. Then I learned that it wanted me to install my own desktop or window manager (they have a ton of options). But I installed XFCE4 because I am most used to that. Once I'm comfortable with the OS then I'll install some of the other options for fun. It is a gui with the XFCE but it does seem to need some CMI work from time to time. And I'm using pacman to manage software. I'm sure it has a gui for that but I have not found it yet... maybe I need to install that too. But I like pacman too, as I used that with Arch before.

It is an amazing distro when you consider it has only been around for a year now. The development team has done one heck of a good job building something this polished in such a short time frame. And it DEFINITELY fills a niche that was needed. It's a user-friendly Arch with all the benefits of an Arch, but with a very user-friendly setup. Their forum is also very user-friendly. It is a contrast with the Arch forum (where you're half afraid to ask anything... in fact I never posted there after reading how they treated others who asked legit questions and got flamed as if they were half-wits). Anyway the EO forum is more like this Mint forum - helpful and patient.\

After 14 years of full-time use of desktop Linux, I simply want everything to work reliably, with the least amount of effort. I haven't found the same optimum of ease and reliable stability anywhere else.

Nicely said. People always think Mint is just for beginners but a 'lazy' advanced user can also have a lot of fun with it. It is reliable and you can count on it if you have real work to do.
Top

They do have the LTS kernels, yes. I'm using the latest HWE but do have at least one LTS installed.

Barbados99 wrote: ↑
Wed Jul 29, 2020 11:57 am
It is a contrast with the Arch forum (where you're half afraid to ask anything... in fact I never posted there after reading how they treated others who asked legit questions and got flamed as if they were half-wits).

I quoted the wrong bit of your post, sorry.

Manjaro does show these as available: 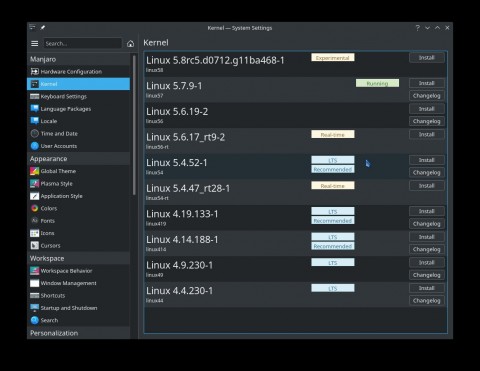 ... but notice it doesn't seem to be configured properly in my case. My actual installed Kernels are as follows:

Noice, thanks for that. I installed Manjaro-Cinnamon on my system. Try it and maybe I'll like it.
My System: ASUS K52F
Specs:
Intel i3 370 M
Intel HD Graphics
500GB Seagate SSD
Linux Mint 20 "Ulyana"
Top

I haven't tried Manjaro with Cinnamon; this is KDE. I would expect the same default kernel availability in the Cinnamon version. Yours probably won't have the bug I've introduced! Been messing with this current install a bit too much in the past 2 years considering it's a production system ...

These are my distros set up on multi-boot desktops, or on my laptops:

* Linux Mint - When I just want to concentrate on getting my work done instead of playing with the distro.

* Debian - A little more stable than Mint, but I seldom use it because the old Kernel and drivers do not support my printers. Do not believe those who says it doesn't come with non-free software/drivers (they probably don't know separate installer ISOs exist for non-free)

* MX Linux - Pretty stable like Mint. But I can't trust its future availability+stability because some of its developers/supporters are keen on not having to use systemd.

* Fedora - When I'm curious what is the "latest experience" I can have in the Linux world.

I have also tried Ubuntu, Kubuntu, Lubuntu, Xubuntu, LXLE, LMDE (Mint), Devuan, Manjaro, openSUSE, Antergos, Bodhi, Knoppix, PCLinux, Peppermint, Puppy Linux, Solus, Zorin, FreeBSD, and Clear Linux. My experiences vary from too outdated, buggy or non-intuitive interface, demands too much of my time, or not successfully installing at all.
If you're looking for a greener Linux pasture, you won't find any that is greener than Linux Mint. ;)
Top