Questions about hardware,drivers and peripherals
Forum rules
Before you post please read how to get help
Post Reply
7 posts • Page 1 of 1

Hello, I started using Linux Mint 2 months age. I've install Linux Mint 20 Xfce. Two days ago, after normal usage the touchpad stopped working, I searched all over the web - 15 tab at min, and found nothing that helped me.
I gave up and installed Linux Mint 20 Mate and the same issue is appearing and my touchpad is not reacting
NOTE - In the setup when you boot into the USB the mouse is working
NOTE - whenever I touch the touchpad the keyboard stop working, only after a restart it works again

I'll be VERY grateful if I could use my touchpad again 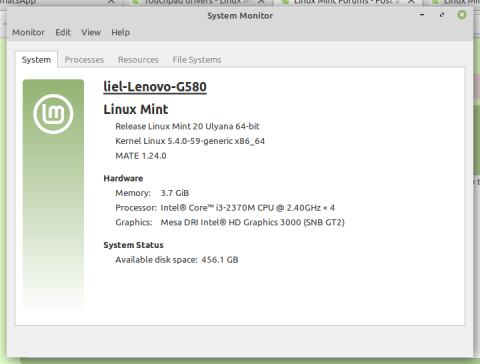 Mint 20 is a relatively new release, and it seems to have problems with some laptops, especially with video drivers and trackpads. What I'd do is download the ISO for Mint 19.0 and make a Live USB and boot with that to see if the problem was Mint-version related. If the trackpad doesn't work with 19.0 it isn't version related. Sometimes there are hardware settings in BIOS, including for trackpads. If your BIOS hasppens to have such settings, and the default is 'Advanced', you can change it to 'Basic' (or something similar) and see if that works.

So, I had some rough some time on reinstalling and I wanted to know why it suddenly stopped working.

I've tried again what you proposed and when I heat the F4 key on the lenovo side (before linux mint), the touchpad did work, so I've done some more tries and the result was that everytime I turn the computer on (after shut down or reboot) I need to press F4 again or else it does not work.

So my last question is: Do you know how can I change the settings back so it would enable it by default?
Or that I am doomed to press F4 again ?
Top

Problem solved on Dell Latitude E6400 with the latest update ! I also had a very bad response from the trackpad : the scroll function was unusable. The last last update included some firmware updates, and it is now working much, much better. Not perfect, but it is a great improvement ! Everything else, including volume and function keys works perfectly on this laptop with Mint 20. Even the standby works flawlessly : it resumes without any problem even after several days.

Sorry, I edited this post because I made a mistake : My trackpad always worked. Only the scroll function did not. However, check again ! The firmware update might have solved your problem too.

New edit : my touchpad / trackpad problem is neither solved, neither permanent. In fact, there is an issue in which driver is loaded at startup. For some obscure reason, the synaptic (works well) or libinput (works terribly bad) drivers can be loaded, and I did not figure yet how to ensure precedence of synaptic. Now on Mint 20.1

Well guys, thank you all for answering.
I really don't want to mess up by upgrading the kernel, I'd like to hear suggestions if you think it is a good move.

In the end the problem was to the trackpad disabling and the solution was to every time I turn the computer on press F4, and I can live with it so it is fine

I'll wait for few more days and then I'll call it SOLVED.