@xenopeek: I'd thought of modifying one of the LM18 series meta packages to point at the appropriate ones in the LM19 & later the LM20 repos but having downloaded one in the link you posted, I see it looks to be mostly a binary file .. wouldn't have a clue what to do with that!

BG405 wrote: ↑
Mon Apr 13, 2020 11:18 am
@xenopeek: I'd thought of modifying one of the LM18 series meta packages to point at the appropriate ones in the LM19 & later the LM20 repos but having downloaded one in the link you posted, I see it looks to be mostly a binary file .. wouldn't have a clue what to do with that!

The .deb file you downloaded is just an archive file. Open your archive manager and open the .deb file there. You'll find a control.tar.gz file and a data.tar.gz and debian-binary file inside. Extract the control.tar.gz file and open that again in your archive manager. Inside you'll find a file 'control' that is just a text file which is basically the file to look at. This has the list of package dependencies. You could use the 18.x list of package dependencies as a basis for which packages you want to install on 19.x for a KDE install.

D'oh! I'd forgotten that. Used to things looking like pkgbuild etc.

thanks! Must be another Senior Moment.

Thanks for the details. Will give me something to have a go at once I've cleared enough space for another VM.

I just had an old problem ( lost my Right Click desktop menu) and out of curiosity I booted Mint 19.3 XFCE running Plasma 5.something recent, to see if I still had one there.

And while I waited for it to boot, and twiddled my thumbs and stuff, I realised there's not a lot I can have in Plasma 5 desktop that I don;t already have in Mint 19 Xfce.

At last count I have something like 20 Plasma apps running the same plasma theme as I have in Mint Xfce with Plasma.
They all run just as fast - or faster in Mint Xfce. The ones that are not Plasma Apps I had installed as GTK in Plasma desktop anyway.
Did I mention the slow boot and shutdown times? That used to annoy the hell out of me.

The one useful thing I have in Plasma 5 that I don't have in Mint Xfce, is something called Activities. These are workspaces (virtual desktops) that can be specifically configured to return to a set of windows (for each activity) on login. So you can have an Activity that is a special workspace for Study. Another one for Video editing. Maybe one specially for Social Networking.
The thing is - I have taught people about these Activities since KDE first introduced them.
And of the several hundreds of computer students I taught, I know of four who actually use Activities in the way they were intended. For others, they are simply a curiosity, just a set of extra Virtual Desktops.

Nobody really wants a see thru file manager any more - but most people just assume Mint Xfce can't do it, and that you need a full KDE desktop and a fancy graphics card to get fast, unusual theming. I am using a Lenovo m93p Tiny with an i5 and on-board intel graphics. 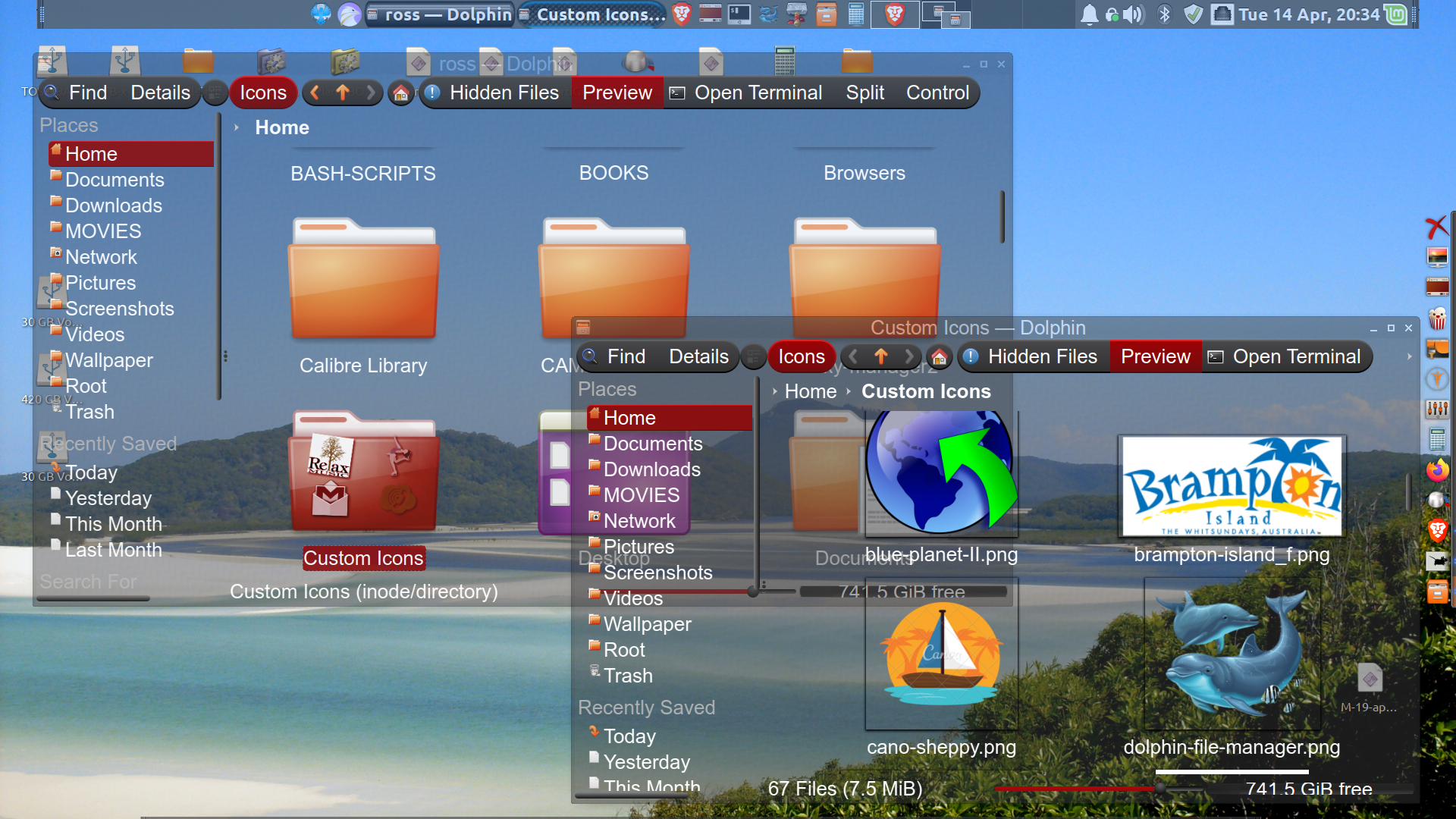 It isn't restricted to Dolphin either: 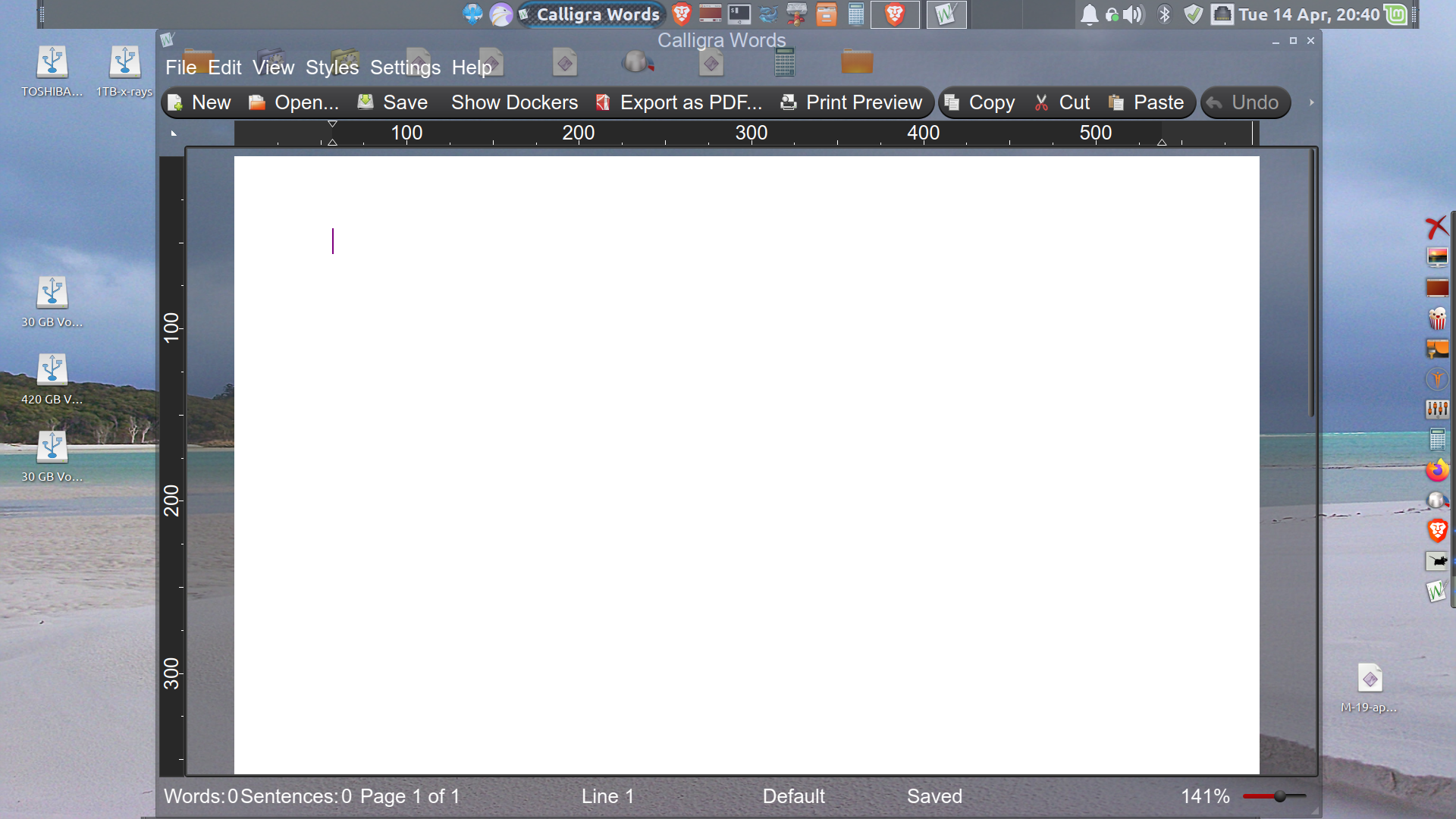 There are lots more KDE Apps that run perfectly on Mint Xfce, and can be easily themed using a QT settings manager. Clem has always seemed to set Cinnamon and Mate as his priorities, and Xfce, Lxde and Kde were convenient for a lot of us, because, well, we 'like mint' and its stability.
But the reality seemed to be that resources didn't stretch to having a team working in parallel to the Kubuntu teams.

KDE/Plasma apps might not work well in Mate or Cinnamon and pick up their QT themes. But as long as Mint Xfce is maintained, it is quite possible to have most of our favourite KDE stuff running, and even looking like KDE.
Current main OS: MInt 19.3 Xfce on Lenovo m93p Tiny, i5-4590T (i915 graphics), 8GB RAM, 1TB Samsung SSD.
Top

rossdv8 wrote: ↑
Thu Apr 16, 2020 9:34 pm
Nobody really wants a see thru file manager any more - but most people just assume Mint Xfce can't do it, and that you need a full KDE desktop and a fancy graphics card to get fast, unusual theming. I am using a Lenovo m93p Tiny with an i5 and on-board intel graphics.

That's probably because the Xfce developers went and screwed the mechanics of the thing up. Which seems to be the only real result of that particular change, so one must assume that, specifically, was their goal. I remember thinking, at the time, "They must not like us very much." But it wasn't until I installed Mint 19.3 - which includes Xfce 4.14 - that I really began to believe it.

Way back in the ustawuz, all the user had to do was to move the mouse cursor up to the application window's title bar, then hold an Alt key down and use their mouse's scroll wheel (or the scroll function on their "mouse-imitating touch device") to adjust that application window to suit, from 100% opaque to 100% transparent. I mostly used it to watch fullscreen videos through a translucent Firefox. Now, though, the same action causes some weird mutant zooming effect, instead, and you have to do something overly complicated to restore the original functionality. Well, NOW I don't even know if the variable opacity function exists, what with so much else getting screwed up in the downgrade to 4.14. But that's how it was in 4.12, screwed up but repairable.
Mint 18 Xfce 4.12.

The variable opacity is still available in 4.14, but it needs to be accessed through the Settings Editor. Specifically, the setting 'xfwm4->general->zoom_desktop' has to be set to 'false'. Then Alt+Scroll on a window's title-bar will change that window's opacity.

The change can also be made in the terminal using the 'xfconf' command:

I created a shell command to toggle between Alt+Scroll = Zoom and Alt+Scroll = Opacity. I added it as a keyboard shortcut command:

I also have had the ALT + Scroll enabled since I started using Mint 19.3 xfce, but that makes the entire window translucent, while I only want the unused elephants translucent (as in the pic in my earlier post). that's the stuff KDE does, that the other versions of Mint usually don't.
However I found that the kvantum theme manager lets me run proper KDE translucency on many themes in Mint. Kwin might also do it, but I had a big fail when I tried it, so I am back to running Compiz.
At present, I've got all my KDE apps looking just the same under Xfce as the did under plasma, so I'm happy again