All Gurus once were Newbies
Forum rules
There are no such things as "stupid" questions. However if you think your question is a bit stupid, then this is the right place for you to post it. Please stick to easy to-the-point questions that you feel people can answer fast. For long and complicated questions prefer the other forums within the support section.
Before you post please read how to get help
Post Reply
9 posts • Page 1 of 1

Last week I installed LinuxMint 19 Cinnamon 64-bit on an otherwise empty HP 15-bs025ng 2BT32EA NetBook (Intel Celeron N3060, 4GB RAM, 1TB HDD, Intel HD-Graphics card 400). There was no other operating system on the laptop so I didn't create a partition, I just allocated the entire hard drive (1TB) to LM. It worked perfectly for a few days, and the suddenly I got black screen out of nowhere. Attempts to reboot would get me as far as the startup screen, but both LM 19 and compatibility mode would bring me to a black screen that eventually cycles back to the startup screen. Sometimes I would get an error message like 'You need to load the kernel first' or 'error no16: File not found'. I attempted to use the 'nomodeset' work around described here but I got the same result.

I have no important files on the laptop so its no problem for me to wipe the hard drive and re-install, however when I boot from a LiveCD I can get into Linux Mint but it doesn't detect my hard drive. When i try to install I can get through the initial stages but when it comes time to select whether to erase, partition or encrypt the hard drive my hard drive is simply invisible, and the Linux wants to try and install to my LiveCD USB (seen here mounted at sda1). 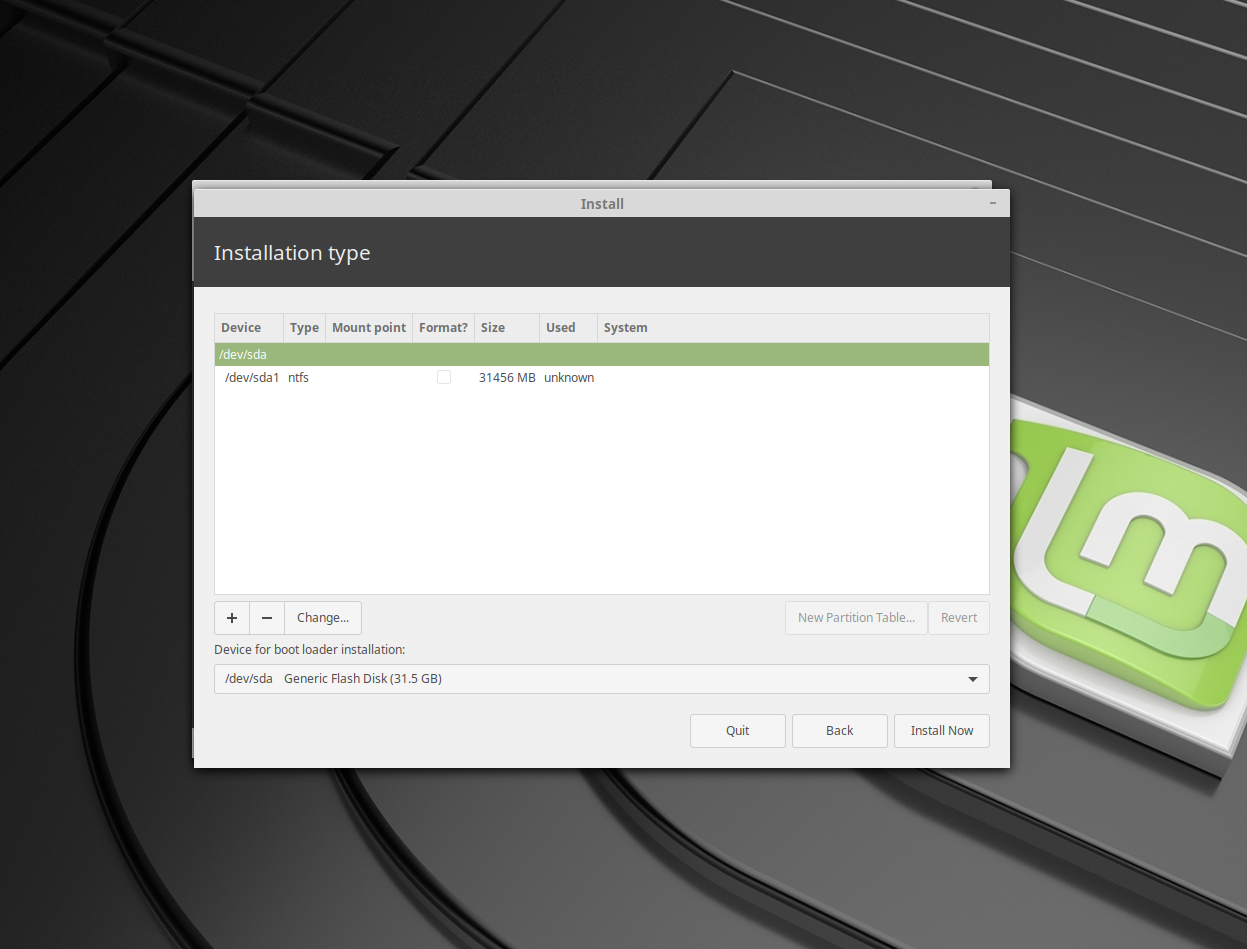 Sometimes the Hard Drive will appear listed in My Computer as a 1000Gb Drive but I can neither open it nor mount it. Through Disks I can see that its referenced as 'sdb' but if I use fdisks -l its not listed, and when I try to mount it manually using the terminal I get a number of error messages telling me it either doesn't exist, or has a bad superblock.

I feel like I've tried every solution I can on the forums I've checked, but it seems like there's something more deeply wrong here because no solution has made any difference. At this point it would be ideal if I could just format the hard drive and start again with a totally clean install, but since I can't get the hard drive to mount I seemingly can't do anything with it. It's currently not showing up at all but if it re-appears I can post a screenshot of any information I can get from it. Also, I'm pretty sure I encrypted the Install when I initially installed LM, and I saved the security key. I'm not sure if that makes a difference.
Top

+1 for member "AscLinux" comments that the hard drive could be bad or going bad. You can boot to a Linux Mint installation or "gparted live" DVD or USB stick and run the partition manager editor to check the drive's partition and possibly fix it, and to run smartctl (smartmon-tools) to analyze the drive.

FYI: SSDrives (SSD) have really come down in price and are super fast.

might want to take a look at Boot-Repair tool

If you're struggling to fix Grub issues by hand, or there's no sign of Grub on your system at all, then you'll need to enlist the services of your rescue media and the Boot-Repair tool, which works with all Debian-based distros, including Ubuntu.

The Boot-Repair tool is focused on those early boot problems caused by the hard drive's boot sector, MBR and Grub. It basically provides a convenient and user-friendly graphical front-end to the tools required to fix many problems.

If the boot repair tool does not fix it most likely your hard drive is on it's last legs
IF your problem has been solved, please edit your original post and add [SOLVED] to the beginning of the Subject Line. It helps other members

Thanks for your help Lord Boltar.

I ran BootRepair but when I rebooted afterwards there was no difference, booting from hard drive still led to a black screen and if I boot from a LiveCd I can't install linux. Here's the PasteBin report if that's helpful at all, my hard drive is referred to in disks as /dev/sdb and I can only find a brief reference to it in the report: http://paste.ubuntu.com/p/dswSkn69mV/.

I've also discovered an odd quirk, when I boot from a LiveCD the hard drive is not detected at all, but then if I suspend linux and re-open it the hard drive is visible, only I still can't mount it really find out anything about it, other than that it is referred to as sdb.

to see if that can find any problem I can look into, but the way things are going I feel like it may just come down to getting a new harddrive (preferrably SDD), which is frustrating as this HDD is relatively new, but there you go I suppose. If there's anything else you can reccomend trying I'd appreciate it but at any rate thanks for the advice.
Top

can you see the drive in the BIOS? also in the bios check to see if secure boot is turned on or not should be off
IF your problem has been solved, please edit your original post and add [SOLVED] to the beginning of the Subject Line. It helps other members

Irish_Newb wrote: ↑
Sun Sep 30, 2018 2:50 pm
I've also discovered an odd quirk, when I boot from a LiveCD the hard drive is not detected at all, but then if I suspend linux and re-open it the hard drive is visible, only I still can't mount it really find out anything about it, other than that it is referred to as sdb.

I'd use smart-tools to inspect the HDD's S.M.A.R.T. info.

Given your description, I'd boot into liveusb and use SW Manager to install smartmontools... and maybe gsmartcontrol if I wanted a GUI.

Suspend & re-open so you can see the HDD, and depending on what you installed either:
- run gsmartcontrol
- from a terminal run sudo smartctl --all --device=/dev/sda (assuming the HDD is /dev/sda of course!)

Hmmm... the GUI is probably the better option for you if you're not aware of how to parse the output from the terminal. It makes the results more human readable... otherwise you may be misled by reported "errors" that aren't really errors. (eg. it reports an error if the HDD is in idle state when the SMART table is read, but that's irrelevant to the HDD condition)

If the HDD is failing (will be obvious from the report) it may very well be as BG405 suggests above; basically timing out during the BIOS checks.

AscLinux is also quite right that cables go bad too; I've found that cheap SATA cables fail more often than cheap HDDs! So I'd also swap the cable out for a known good one just to eliminate that possibility.
- Andy

I may be weird but I'm saving up to become eccentric.
Top
Post Reply
9 posts • Page 1 of 1