[How To] Dual Boot Linux Mint Cinnamon with another Linux Distro.

Write tutorials here
There are more tutorials here http://community.linuxmint.com/tutorial/welcome
Forum rules
Please don't add support questions to tutorials,start your own thread in the appropriate sub-forum instead. Before you post please read this
Post Reply
7 posts • Page 1 of 1

[How To] Dual Boot Linux Mint Cinnamon with another Linux Distro.

Hello All,
This is for newbie’s like myself, I found it hard to find how to just do a straight dual boot NOT with/alongside windows. So after a bunch of
research, and asking here on the forum, I finally have a machine with 2 Linux OS’s, in a dual boot, with Linux Mint Cinnamon (LMC) 19 as the main
OS. The other is Zorin 12.4 (Ubuntu). So without further ado, here are the steps that were done to achieve this…..

Important factors to note: My BIOS is Legacy (not UEFI), Machine Model: Dell Inspiron-3847, used DVD/RW’s with ISO’s for install.

1) Download and burn to disk - Boot Repair (As a just in case). I believe you can use USB’s also, but I used DVD’s and can’t answer questions related
to using USB’s. 2) I did a fresh install of LMC. But if you currently only have 1 Linux OS installed, you should be good. Here’s what my hard drive
looked like (Used Gparted to obtain image) after. I also used GParted by running the LMC live ISO from the install DVD. 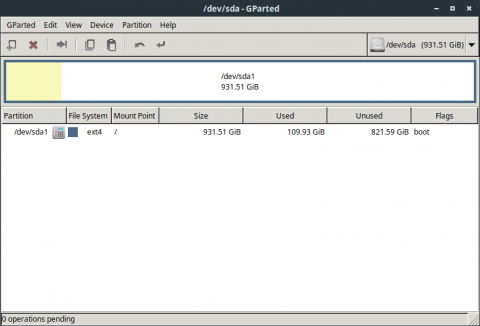 3) Next I created a 4 GB swap. Now, I’ve read you need to, but also have heard you don’t have to.
I don’t know which is the correct answer, so I just created a 4GB (4096 MB), and moved forward.
Here’s what the hard drive will look like after. 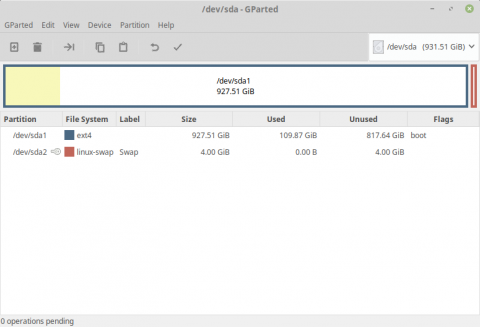 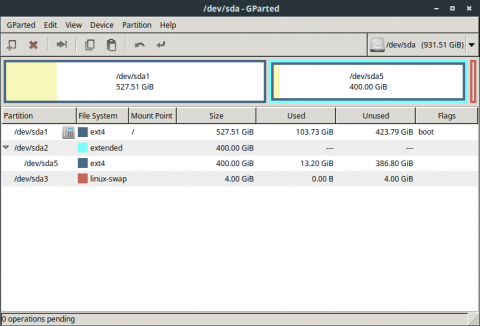 Courtesy of fabien85:
- open gparted, select the linux partition (sda1, blue one in your screenshot), click Partition > Resize/Move, use the slider to choose the space you want to leave free, click resize/move then "apply all operations"
- grab a cup of coffee, this may be a bit long.
It's much faster on an SSD than on a magnetic hard drive. It gets slower the more data you have, so in fact it would have been better to do it just after installing the system, before restoring all your backups. Anyway just wait, with a good SSD it can take only 10 minutes.
- when it's finished, close gparted, shutdown, unplug the live USB
- check you can still boot to your Mint, just in case. (there should be no problem, but it's always good to check)

5) Loaded up Zorin 12.4 ISO on DVD/RW disc and followed fabien85 instruction’s:
Please note, again, I used DVD’s, not usb’s...
- boot the live USB of the second OS you want to install. If it is ubuntu-based, the installer should provide an option "Install alongside Linux Mint"
which should work out of the box. If it is another OS, you will have to ask them how they provide the option to dual-boot.

So now I had two Linux OS’s installed. The tricky part after this is which one do you want to boot into when you power up. It will automatically
boot to the 2nd OS, most recently installed. To change this to boot into the 1st, in my case LMC, I did the following… But before I get to that.
I first downloaded grub customizer. I read that could be leading to big trouble/issues. So by following further instructions from my new LM mentor,
he’s like the Yoda of Mint, I would imagine, I did the following…

But first… When you boot up, you will see a list (sorry couldn’t figure out how to do a screenshot of this). In my case, it had Zorin on top, then a
few memtest, then Linux Mint. LM was the fifth one down, and what I wanted to boot to. The top of this list is 0. LM was 5th, so it would be 4….
So if you don’t want to boot into the 2nd OS, count how many lines down the OS you want to boot into is, and pick that number. Again, it goes 0, 1,
2, etc. So when I did the following, I used 4 instead of 2.

change the line GRUB_DEFAULT=0 to GRUB_DEFAULT=2 (adapting the number if necessary, like mentioned, I used 4 and not 2),
ctrl+o to save, ctrl+x to exit. Then tell grub to account for the changes by running:

If you have any issues, use Boot-Repair… It can be a lifesaver…

I would like to Thank fabien85, Pierre, slipstick & frosh for their assistance. If not for them, this wouldn’t be here to hopefully help you achieve
dual booting 2 Linux distro’s…

To jeffk969, Over the past 12 years I have found that the Boot Repair disk does not always work. I have run it a number of times and it shows the repair was successful when it really was not. Others to consider are SuperGrub 2 and System Rescue CD.
Top

jeffk969 wrote: ↑
Wed Jan 02, 2019 8:39 pm
- boot the live USB of the second OS you want to install. If it is ubuntu-based, the installer should provide an option "Install alongside Linux Mint"
which should work out of the box.

If it's using an installer with that option, your instructions can be reduced to:
Top

Thanks Gents....
Haven't yet used either of those rbeltz, but it's good to let others know they are out there. And I hear what you're saying with
boot repair. I haven't myself used it too much either, but when I have, it helped me big time... I'll look at the other 2, can
never have too much help...
Gm10, thanks for reducing. I used those lines because they were given to me and were easily understood. I didn't want to
get too technical, for many noobs may not understand/know the terminology. Was hoping to keep it simple. Heck, I'm pretty
simple minded myself, maybe that's why I understood fabien's post.... He dumbed it up for me..ha
Top

Update: After a few months when I wanted to try another OS all I did was booted up with the Linux Mint 19.1 Install DVD,
and ran Gparted. Deleted the partition with Zorin (it was still a separate partition). Updated grub, and rebooted. It
booted into Linux Mint. Than I put in Solus 3.999 Budgie Install DVD and repeated the steps. Installed with no problems.
Top

Instead of choosing the "alongside" method and wasting all that 400GB for just one testing/auxiliary OS, I would have chose the "something else", and gave Zorin something sensible like 20-50GB (depend on how much you might use it). You would not had to delete it (zorin), and could have added a bunch more testing distro's.
Mint 19.0 mate on 2 identical Thinkpad T420's
Top

Thanks for the tip rickNS. I've yet to do an install using Something Else. Wasn't sure how that worked. I will have to try it next time.
Top
Post Reply
7 posts • Page 1 of 1