All Gurus once were Newbies
Forum rules
There are no such things as "stupid" questions. However if you think your question is a bit stupid, then this is the right place for you to post it. Please stick to easy to-the-point questions that you feel people can answer fast. For long and complicated questions prefer the other forums within the support section.
Before you post please read how to get help
Post Reply
16 posts • Page 1 of 1

My PC has a audio+mic jacks on the tower case (front), the mainboard ones and I add a Xonar DS audioboard.
The first two work, but I want to record my voice using ther Xonar DS audioboard.
I have a headphone set with mic for gaming, and I plug in the audio jack (green one) and the mic jack (pink one) into their holes in the Xonar DS, and in the Sound Settings I see it and I chose the Analog Output or Headphones, but Analog seems to give better sound. 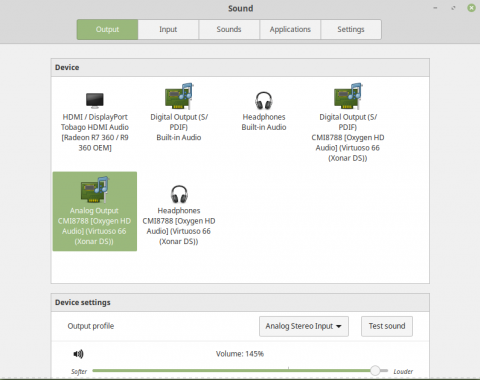 In the Input tab, I tried every each one of them but no sound is recorded at all... I tried Audacity, I tried some online webpage, and no sound is being recorded.
With other 2 mic jacks (from mainboard and tower case) everything works fine. 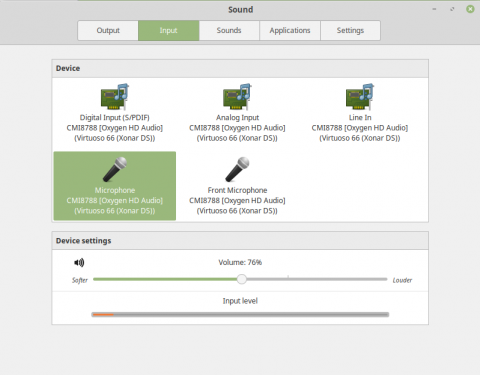 I have read the past 2 hours a lot of topics but I just did not manage to make my mic work.
In Alsamixer I press F6, I select XONAR DS, then F4, and there no matter what commands I press (I saw in Help some commands), nothing happends... 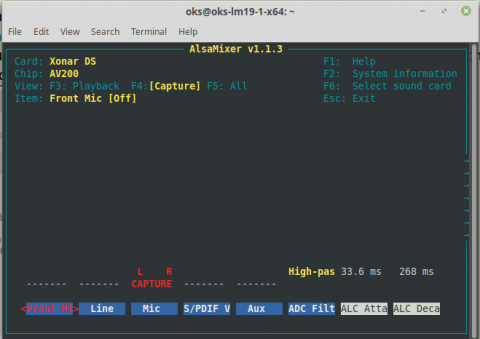 In alsamixer, stay on the first page after selecting the Xonar card, or press F3 if it's still open. You'll probably have a Mic option there as well that at the bottom will show MM meaning it it muted. Simply select the column then press the m key to unmute. Be aware that there are more options than what appears in the window on the screenshot you showed. See the column of little arrows on the right of the window in the "border"? That means there are more choices that you have to keep hitting the right arrow key to make visible, or increase the width of the window.

If that doesn't help, paste back the results from running amixer in the terminal. That should show all the mixer options available to you for the Xonar card.

MrEen, thank you mery much for your reply.
Here is a picture from the back. Did I insert the jacks correctly? (I started doubting that too) 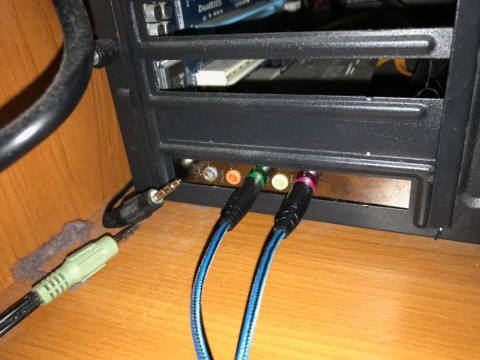 I opened alsamixer, I selected Xonar card using F6, then I pressed F3, and here it is what I see (after expanding the window size:

As far as I can tell, you've inserted the cables correctly.

I gave you the wrong amixer command, as I expected the Xonar to be card #0 based on your original post.

First see if unmuting Analog Input in alsamixer helps. If not, let's see the output of aplay -l please.

I mean I chose both, but no sound is recorded at all... The „Front” one was recording only when I connect the mic in the front jack of the tower case.

This is what Alsamixer shows after unmuting what you said: 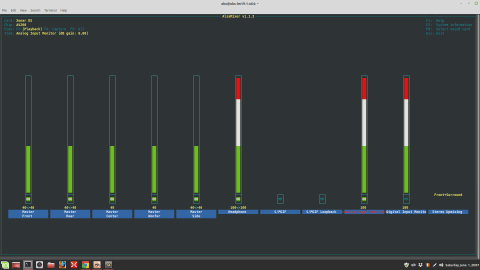 I can't really say what's "normal" with the Sound Settings app as I don't have it. You might want to try PulseAudio Volume Control (pavucontrol) instead as it has more configuration options. I think some of the confusion is when you're selecting something, sometimes it not from the same sound card as the last thing selected, which is why the options change.

If you install pavucontrol, make sure the Configuration tab Profile for the Xonar is set for both input and output (duplex), then you should see something available on the Input Devices tab for the Xonar to use. Click on the check mark next to it to make it the default input device, then test to see if it's working.

First I saw this: 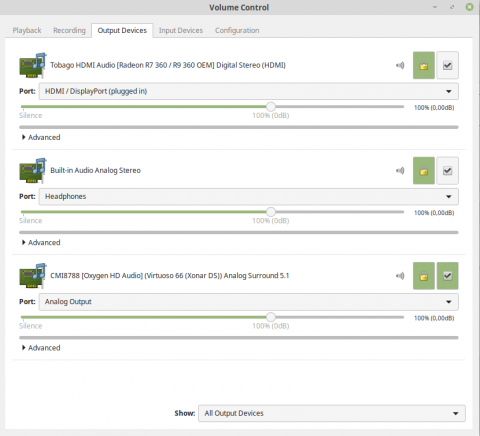 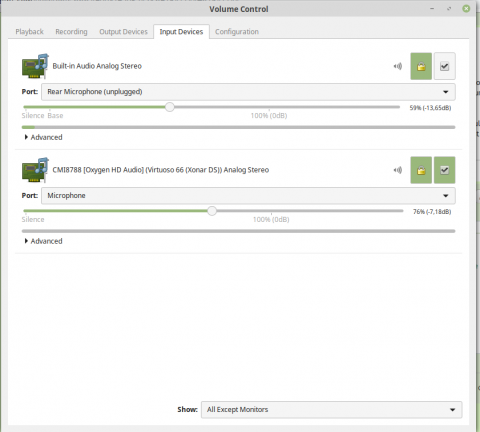 Then I set this as you said (duplex): And after setting the „duplex” I saw this: I'm pretty sure this is your issue:

I think that'll be on the alsamixer then F4 page near the end to the right. Move it up with the up arrow at least half way then test.

Entered Alsamixer, F6 and selected my Xonar, then F4, and in the Right Corner there is MIC (first) and the FrontMic (third). Presing Up Arrow does nothing for either Mic and FromMic. Sorry I wasn't clear. Raise the column that says Input.

All that's needed at this point is to edit your original post by clicking on the pencil icon and adding Solved to the Subject.

Happy I could help!

For your setup, I believe it might be. If pavucontrols Input Devices tab has Mic volume settings that have an effect, then you probably want Input in alsamixer at 100%, and 70-80% in pavucontrol. You might have to play around with it a bit to find what works best with your system.