Aha, I see...thanks! Very difficult tracking down answers for Linux sometimes, when you want to pick apart an aspect. Have a great night or day (wherever you are).
Refurbished Thinkpad X230 dual boot Windoze 10/Linux Mint
Top

Mint Lounger wrote: ↑
Tue Jan 14, 2020 7:17 pm
Yes, I'm aware it's a KDE application, and that it might also download some other KDE dependencies as a result...but some of the files bundled with kmag are totally irrelevant to that app's use.

Are you sure those weren't updates to vlc? And applications and packages which start with k are often part of KDE (desktop), and might need almost another whole GUI system installed, unless you're already using KDE.
Please edit your original post title to include [SOLVED] if/when it is solved!
Your data and OS are backed up....right?
Top

No, I do not have VLC installed. Nor kwallet, which dependencies were also included. Unless there's a glitch in Synaptics, the installation package or something else, I find it beyond the pale for one installation to include updates to another application. 'Cause that's not how package managers work.


and packages which start with k are often part of KDE (desktop), and might need almost another whole GUI system installed, unless you're already using KDE.

They might, but considering this to be a simple utility caused me to wonder what's going on. Especially when some dependencies appear to be totally unrelated to the application being installed. I have installed an occasional KDE app before, so am acquainted with the process. Hopefully, one of the three authors of kmag will eventually get back to me, although one of their emails seems to be defunct, as it bounced back a few hours later.
Refurbished Thinkpad X230 dual boot Windoze 10/Linux Mint
Top

Well this is curious, as kmag's list of dependencies on this page does /not/ include the files in question:

BTW, I don't consider my question "solved" yet, as the kmag mystery is still afoot. I did not edit my OP as solved, admin must've done in. So I just went and got rid of it.
Refurbished Thinkpad X230 dual boot Windoze 10/Linux Mint
Top

Dependencies are a tree, i.e kmag has some dependencies, those packages in turn have their dependencies, etc etc. As this is a KDE app the chain includes a whole bunch of packages that are KDE specific that wouldn't be found in a XFCE, MATE or Cinnamon install.

What I get from a simulated install on Cinnamon in 19.3. Yep some vlc related packages are in there.

This command will print the whole dependency tree for kmag. It's huge.

This command will give a clue as to how vlc related packages end up being a dependency in the chain.

Then working through based on that clue we get

Yes, of course. I understand that installing any KDE app will be bundled with some KDE dependencies...and that it might vary from one desktop environment to another. I am not confused about that. But what's up with seemingly unrelated files within that bundle, is what I'm curious about. Like: are they really necessary, or are they just thrown in for some other reason? So let's see if the kmag authors get back to me, and what they have to say about it. I tried looking up each of these unexpected dependencies, but could not find any explanation as to why they've been bundled with kmag. Thanks just the same for your elucidation.
Refurbished Thinkpad X230 dual boot Windoze 10/Linux Mint
Top

Simulated output - no vlc this time.

Wow, thanks! You certainly know your way around Linux. I will go through your tutorial with a fine-toothed comb, that I may get better at this, myself. I consider my query solved.
Refurbished Thinkpad X230 dual boot Windoze 10/Linux Mint
Top

Sometimes I'll not install a program if it has 'too many' dependencies - there are probably other magnifier programs and you probably already have a (fairly primitive) gizmo called xmag (in package x11-apps):

Edit: there's package xzoom which sounds nicer than xmag and has zero dependencies on my light system (most 'x' programs only depend on the same low-level software that every GUI programs needs).
Please edit your original post title to include [SOLVED] if/when it is solved!
Your data and OS are backed up....right?
Top

They are required dependencies.
Top

Flemur wrote: ↑
Thu Jan 16, 2020 10:52 am
there's package xzoom which sounds nicer than xmag and has zero dependencies on my light system (most 'x' programs only depend on the same low-level software that every GUI programs needs).

If you've read my previous posts in this thread, you'll see I've tried that, and the other magnifiers available in Synaptics. They don't work well at all, for my needs. Among the three, kmag works best. However, in this thread I've already followed another's suggestion to try Compiz, and I was able to get the screen magnifier that is best. Thanks for your reply, though. Xzoom may "sound" nicer (whatever that means), but it isn't, in fact it doesn't even work at all. I have a hunch you never even tried it out.
Last edited by Mint Lounger on Thu Jan 16, 2020 4:25 pm, edited 2 times in total.
Refurbished Thinkpad X230 dual boot Windoze 10/Linux Mint
Top

Already discussed in this thread. I was questioning /why/ they were required...not that I don't understand the concept of "required dependencies." Thanks for your comment, though.
Refurbished Thinkpad X230 dual boot Windoze 10/Linux Mint
Top

smurphos wrote: ↑
Thu Jan 16, 2020 1:45 am
Dependencies are a tree, i.e kmag has some dependencies, those packages in turn have their dependencies, etc etc. As this is a KDE app the chain includes a whole bunch of packages that are KDE specific that wouldn't be found in a XFCE, MATE or Cinnamon install.

If there were a decent magnifier from XCFE, I'd certainly prefer that...I've tried the two available, and they're just plain lousy. KDE (and other desktop) apps are a handy last resort IMO. I no longer need kmag, since Compiz's magnifier is much better. However, for learning purposes, allow me to proceed:

Okay, I followed all those commands, and learned about the dependency tree. I had to first learn how to download source code, which I finally did. As it turns out, reading the source code for kmag.cpp did not show me any "vlc" (or "phonon" or "wallet") listed, so advice to read the source code wasn't any help. But your commands did, and many VLC aspects are included, like so:

I then uninstalled kmag with "complete removal," but the VLC/kwallet/phonon dependencies remain installed. So kmag dumps a bunch of dependency files when installing, but does not remove them when uninstalling! I guess I have to click on each one in Synaptics to have them removed. I don't know, though, if that will corrupt other applications...though I have no other KDE program installed. I guess I have to go through the list of dependencies installed with kmag, and remove each one myself.

Okay, I'm guessing the "remove orphaned packages" utility will take care of that...I just discovered it in the Mint menu.

Regardless, after uninstalling kmag, then reinstalling with your non-vlc command:

I still get the same, long list of vlc dependencies, using the "apt depends" command:

These outside dependencies are like Wlindoze' dll files I guess (a concept, I presume, stolen as usual from Unix)...only they keep their original names based on when they were first created by another application...rather than what they actually do. Why reinvent the wheel, when one can hook into some dependency from another program that does the same subroutine. But then /that/ dependency may need a source dependency, and the source dependency may need it's /own/ source dependency...and so on! Oh how I long for the simpler, good ol' days of DOS .ovl (overlay) files (also probably stolen from Unix)!

Anyway, I'm obviously too clueless, still, to grasp installation dependencies in all their entire glory...but I'm keeping your instructions saved to a text file, for further exploration. Thanks for your excellent help, no need to elaborate further on your part, unless it's your pleasure.
Last edited by Moem on Thu Jan 16, 2020 6:57 pm, edited 1 time in total.
Reason: Swapped the [c] tags out for [code] tags; the code tags retain some formatting that makes your output easier to read.
Refurbished Thinkpad X230 dual boot Windoze 10/Linux Mint
Top 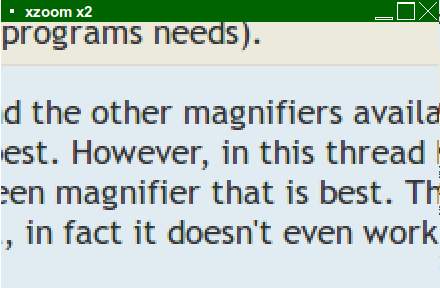 Please edit your original post title to include [SOLVED] if/when it is solved!
Your data and OS are backed up....right?
Top

Like kmag, you have to keep dragging it around to do any reading. It's inconvenient. Compiz enlarges the entire screen, and makes things much more user friendly. Xzoom is less convenient to use than kmag, anyway...for a magnifier you have to drag around. It's fine for occasional use, just not frequent use. I thought xzoom didn't work at all, because when it first loads through the terminal, it flickers like wild, and seems to be stuck as a small square in the upper right corner. Turns out you have to right click its tab in the panel and select "move." (Probably because I prefer the panel to be at top, due to the physical arrangement of my dual monitors...and sometimes a program's window opens with the topmost part overlapped by the panel.) Anyways, Compiz is great, so problem solved.
Refurbished Thinkpad X230 dual boot Windoze 10/Linux Mint
Top
Post Reply
35 posts