Questions about hardware,drivers and peripherals
Forum rules
Before you post please read how to get help
Post Reply
34 posts

Don't worry, that was just my musing on the situation. Let's see the output of amixer now please.
My sound fix tips for Linux Mint
Top

its awfully late here ill have to continue tomorrow... please leave me homework

You may not have noticed my last post as it started on a new page. Anyway, get some rest! I'll be here tomorrow around the same time as today.

EDIT: Now you saw it.

I'll let you know if I spot anything there.

EDIT2: Some of the PGA's aren't at their max. PGA10.0 PGA11.0, PGA2.0 and PGA4.0 are all in the low 60's percentage wise. This might make a difference. This SOF driver is quite new and is still going through growing pains. It may require a future update to get this working, but I can't say for sure.
My sound fix tips for Linux Mint
Top

... so, raising all the rest of them in alsamixer does show a sign of life in the zoom mic audio control. but the other side still doesn't hear a thing. the other side of the conversation reports some sort of light background noise. 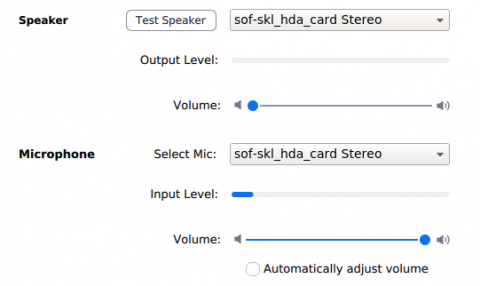 All right. We're getting close!

See if PulseAudio Volume Control (pavucontrol) can raise the volume level even more. It should (normally with the older mics at least) be able to raise the level well above 100%. This would be on the Input Devices tab.
My sound fix tips for Linux Mint
Top

so basically if i understand correctly, what we are doing now is just raising the sound level hoping eventually it will be loud enough. there is no driver or some other fix using the terminal.. ?
Top

Yeah, we're experimenting to try to find the magical solution for your case. This is a very new audio driver in Linux, and trying to find the right setup is not straightforward. I'm just hoping you're going to see Digital Microphone or similar on the Input Devices tab. If you only see Microphone, that's for a plugged in mic, not the internal one.

There are still some systems where we can't get the mic working, but most were solved with all updates applied. The more command I gave earlier was to verify you're not running a Kabylake chip that cannot work still, so at least we know you're in the group that might be able to get it working.

If it's doable for you, you might want to consider making a Live USB of Ubuntu 20.04 and run that and test the mic. Mint 20 will be out in beta very soon that will be based on Ubuntu 20.04, and there is better support for the new audio driver there. If nothing else, at least you'll know if Mint 20 should immediately fix the issue.

There's also the decision to create a bug report here that is yours to make. I'd strongly suggest trying Ubuntu 20.04 first, just so you know if it's the older versions of kernel/ALSA/PulseAudio causing this as opposed to the audio driver itself. If it works in Ubuntu 20.04 Live, there's no need to create any bug report, or if so, to Ubuntu instead for the Bionic series that Mint is based on. There's still the slight problem of knowing which package to file the report against, as it could be any of the kernel, ALSA or PulseAudio.
Last edited by MrEen on Sat May 23, 2020 2:09 pm, edited 1 time in total.
My sound fix tips for Linux Mint
Top

ill make a bootable ubuntu d.o.k, but will i be able to download zoom while in the experimental usb mode (not installed)?
Top

I'm not 100% certain about that. I think you can download what's available here and install it.
My sound fix tips for Linux Mint
Top

so i booted Ubuntu from a live dok, made all the changes in alsamixer, downloaded zoom (via the package manager) but all was the same. couldn’t get mic input.
the right touch-pad click did work here tough !

this is very frustrating, do you think it i should post a bug comment? i have to admit using zoom is essential
Top

At this point that would be your best shot. SOF issues go here. I'd start there as those people know SOF the best. But this probably boils down to the way Ubuntu has implemented it, which I would guess would be as a kernel bug to be reported following the guide here.

If you have a smartphone, you could use it as the webcam/mic by installing droidcam. At least it should get you up and running until the mic issue is solved.

o.k thank you very much for your help
i really appreciate it!
Top

It's a shame we couldn't get the issue fixed, but in time it should work. Every time you update the kernel, or alsa/pulseaudio, remember to check to see if the mic has started to work.
My sound fix tips for Linux Mint
Top
Post Reply
34 posts